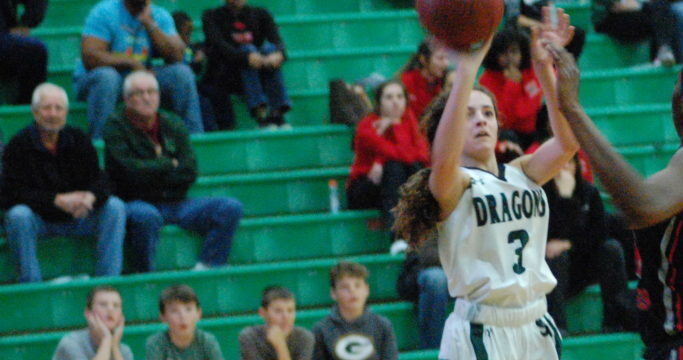 Lady Dragons Look for a Comeback in Dominate Fourth Quarter

The Ste. Genevieve Dragons fell 52-46 against the Jackson Lady Indians, however, Maci Reynolds was a bright spot on the night as she eclipsed the 1,000-career point mark.

The Ste. Genevieve Dragons fell 52-46 against the Jackson Lady Indians, however, Maci Reynolds was a bright spot on the night as she eclipsed the 1,000-career point mark.

“We just need to keep playing games and find our groove,” said head coach Jordanna Walk. “Maci Reynolds had a great night and hit a big milestone with the 1,000-point mark. I’m super proud of her, she works all year round on her game and this is just one reward for that extra time she put in.”

It was the Lady Indians controlling the pace of the first half as they owned a 29-19 lead. They carried that momentum over into the third as Jackson led, 40-26. The Dragons dominated the fourth with a 20-12 advantage, though the comeback fell short by six.

“Our defense in the second half definitely brought us back and kept us in the game,” said Morgan Schwent. “Everything happens for a reason and all we can do is learn from the loss and build ourselves back up.”

Reynolds led all scorers with a game-high 23 points. “Getting to my 1,000th career point has been one of my main goals since freshman year,” said Reynolds. “So getting that was huge for me and a great way to start my senior season.”

She continued, “Being unpredictable on offense worked best for me on the offensive end and putting lots of ball pressure on our press worked well on the defensive end. Something we need to work on is moving the ball around better on offense and attacking the basket more.”

Megan Aubuchon and Marysa Flieg contributed seven points each. “We are obviously upset that we lost but we know it’s not going to be easy and that they were a good team,” said Aubuchon. “Our full court press worked really well I thought, but we need to be more physical.”

Lady Dragons Look for a Comeback in Dominate Fourth Quarter