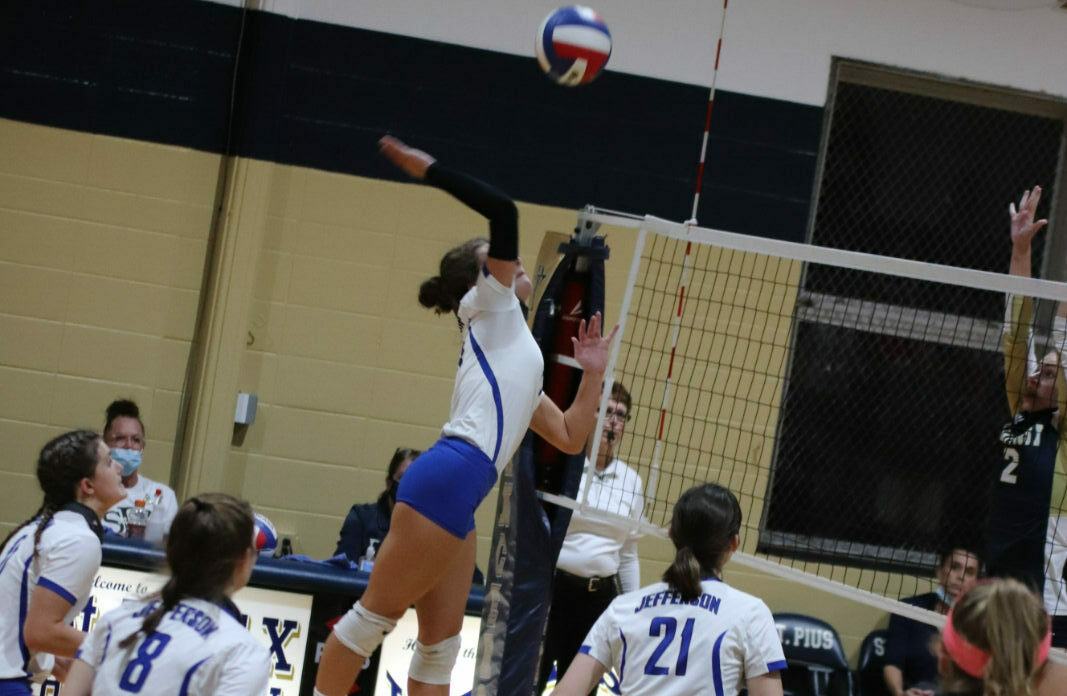 Jefferson tops Saxony Lutheran in the penultimate game of the season.

The 10-5 Jefferson Blue Jays played their penultimate game of the regular season Monday night, and made short work of the 9-16-2 Saxony Lutheran Crusaders. The Blue Jays took control of the match early and never looked back, securing a 2-0 win.

Saxony came into this one hot, winning three of their last four games, which included a 3-0 win over Oran in their most recent contest.  However, strong play by the Jays cooled the Crusaders in a hurry, leaving Jefferson with just one more game before district play begins.

The Blue Jays looked dominant from the beginning of the first set and secured a 25-17 win. In the second set, the Crusaders began to close the gap, keeping the Blue Jays on their toes throughout. Despite this resurgence, the Blue Jays proved too much for the Crusaders and took a decisive 25-21 set win.

It was the performances of Blue Jay Sophomores Kirstyn Loyd, Paige Siebert and Ava Roth that put Jefferson over the top Monday night. Loyd had a spectacular performance, leading the team in kills with nine on 15 attempts and recording no errors while also providing nine assists and six digs.

While the sophomores shined for Jefferson, junior Macie Waddell also put in an outstanding performance in the win. Waddell led the Blue Jays in digs with eight and also had eight serve receptions.

Head coach Tara Fish following the game, praised the team’s effort but made sure to point out that there are still things to work on with the postseason looming.

“We still have some defensive things to work out,” Fish said. “But we are continuing to grow and did some great thing against Saxony.”

The Blue Jays are now 11-5 on the season with just one game remaining before the district playoffs. Jefferson’s final regular-season contest will be an away matchup with Herculaneum (7-13) on Thursday night.

Jefferson will begin its postseason play in the Class Two District Four tournament next Monday when they play West County (11-5) in the first round.