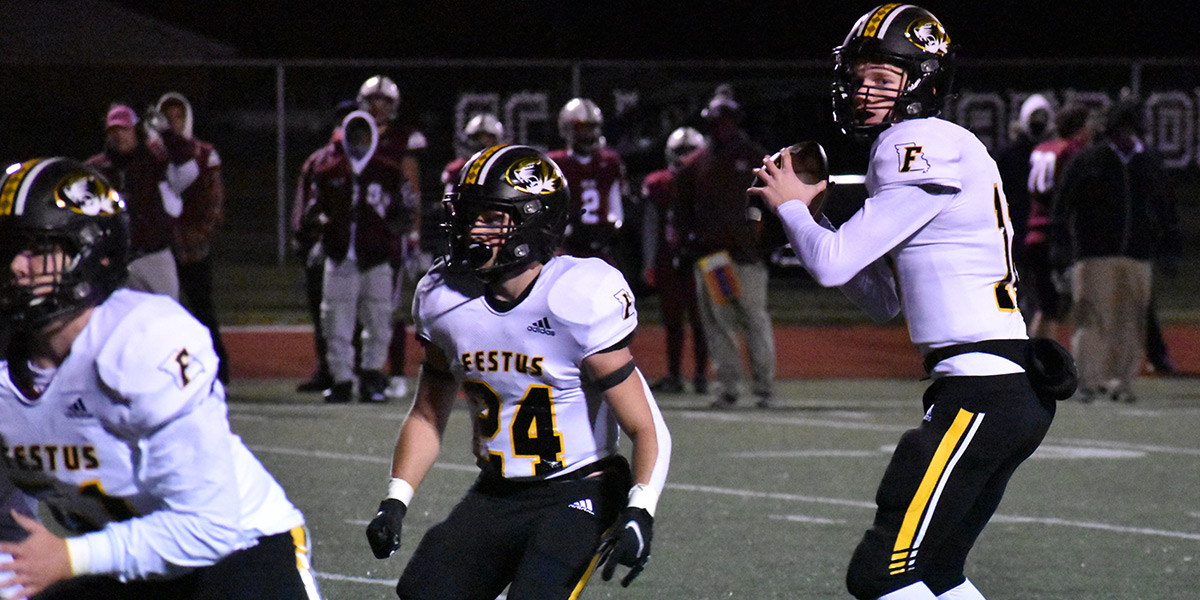 The Festus Tigers make short work of the Warriors with a 55-0 shutout victory to roll into the playoffs.

The Festus Tigers won their final regular season game in grand fashion on Friday night as they made mincemeat out of the St. Charles West Warriors 55-0. The shutout was the first for the Tigers this year, and put an exclamation point on their 8-1 season just before the playoffs. Coming off of their first and only loss of the season thus far, this was a huge bounce-back effort.

And who better to close out the regular season than stalwart Quarterback Cole Rickermann, who put on an absolute clinic in this one. If you’re keeping score at home, Rickermann toasted the Warriors defense for 241 yards and six touchdowns. Typically the ground game reigns supreme in High School Football, but the Tigers’ signal caller flipped the script in this one.

When questioned about how his team rebounded and his masterful 6-TD performance, Rickermann replied, “We just all figured we needed to keep our minds focused on every practice and block out all other things that aren’t football. It resulted in us having a good week of practice and we were able to play well Friday. It was a good feeling throwing for that many. I didn’t know how to feel in the moment but looking back on it was a great experience.” 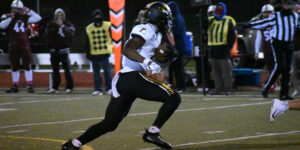 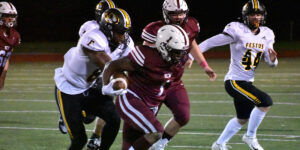 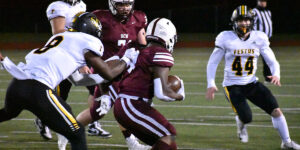 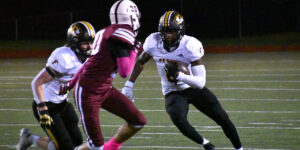 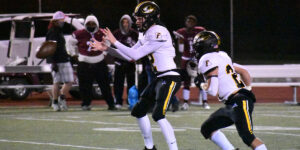 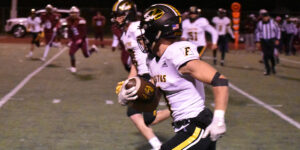 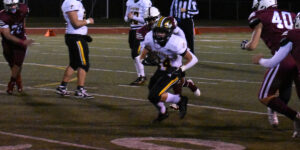 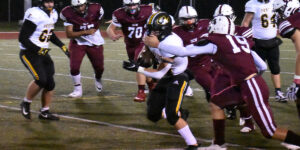 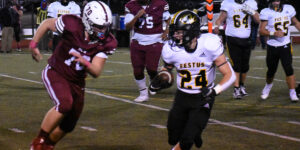 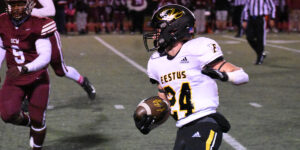 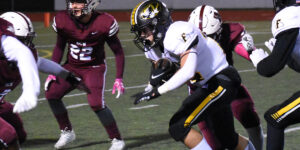 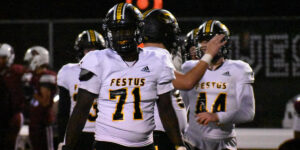 The first quarter featured just one score (Rickermann to Isaac Stucke for 12 yards), but Festsus blew the doors wide open in the second. Rickermann hooked up with Collin Doyel (18 yards), Kaian Roberts-Day (48 yards) and then Stucke again (one yard). Cayse Martin provided the icing on the first half cake with a 54-yard pick-six. Those five TDs, plus four out of five ensuing extra points, saw the score sitting comfortably in the Tigers’ favor at 34-0 as the half came to a close.

Head Coach AJ Ofodile praised his QB by saying, “Cole has a great competitive temperament. He is super competitive but doesn’t get to up or too down. He is a positive leader for teammates and a great example with his diligence in everything we ask of him from weight room to practice to game day.”

Prior to that quip, Coach Ofodile’s intermission speech clearly kept his boys’ heads’ in the game as the Tigers came out roaring again in the third quarter. Rickermann was at it again and hooked up with a couple familiar faces from the first half. A pair of 50-plus-yard bombs to Roberts-Day (58) and Martin (56) catapulted the score to 48-0, and veritably extinguished any hope for the Warriors.

The fourth quarter was a quiet one offensively at both ends, as the only scoring came from a three-yard rush from Trenton Young to push the tally to 55-0. The defense, in an absolutely epic performance, held strong and completed the shutout. The Tigers truly dropped the hammer in this one to finish off the remainder of their schedule before the playoffs in the most convincing of fashion.

Rickermann was clearly a standout, but this was a total team effort that featured championship-caliber efforts across the board. Roberts-Day not only led the Tigers in receiving with his 106 yards and two scores, but totaled a team-high 75 yards on the ground as well.

When asked about his biggest game of the season, KRD responded with, ” I practiced hard, very hard, and felt like I had to step up finally, and I took my opportunities and did my best with them. Sometimes a loss can really knock some sense into you and we are finally looking like a serious team.”

His coach also thought he had an outstanding day on the field. “Kaian Roberts-Day had his best overall offensive performance as a runner and pass catcher. He coincidentally had his best week of practice as well.”

In tow, Dalten Yates added 57 yards on nine carries and Desmond Davis shined on the defensive front with seven tackles, including two for a loss, and an assist. Martin was also a dominant force on both sides of the ball with his 56-yard TD and 54-yard interception return for another score. He added a pair of tackles for good measure.

When asked how he felt about his vaunted, dual style of play, Martin responded, “After the loss the week before we really needed to have a good week of practice and put it behind us and focus on Saint Charles West. And it felt great to contribute on offense and defense and get a big win to boost our confidence into districts.”

With the playoffs looming and a big win in the books following a tough loss, the Tigers Head Coach felt that the team, “had a much more focused approach to practice this week. It’s good to get humbled sometimes.”

Festus has a bye next week after capturing the first overall seed, but you can bet dollars to donuts that they will be ready and waiting for whatever is thrown at them two Fridays from now. 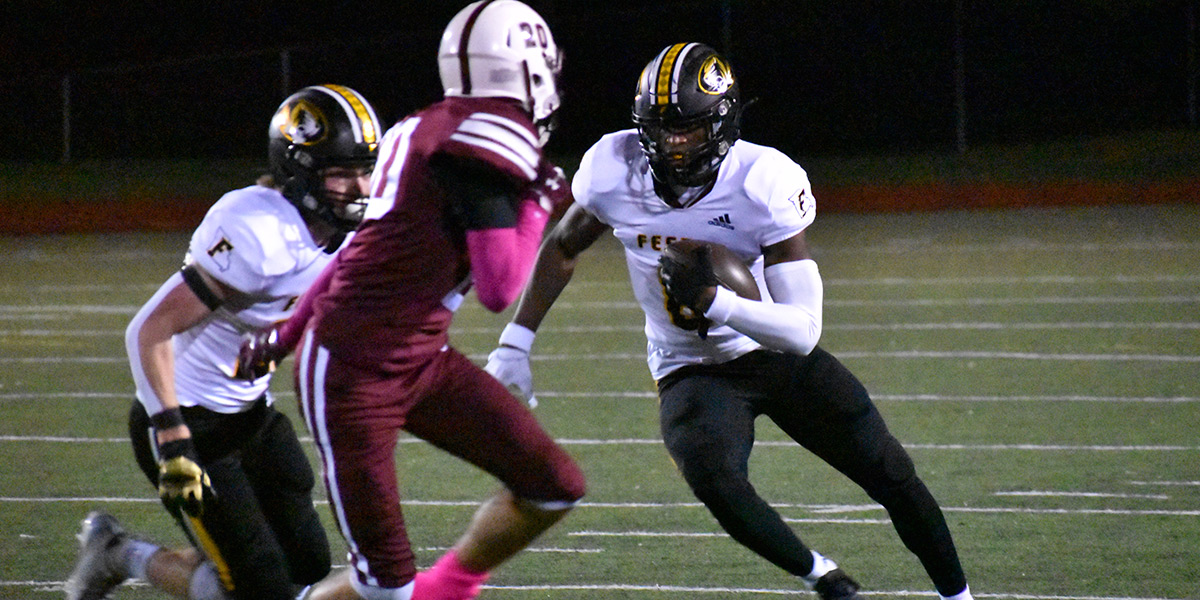