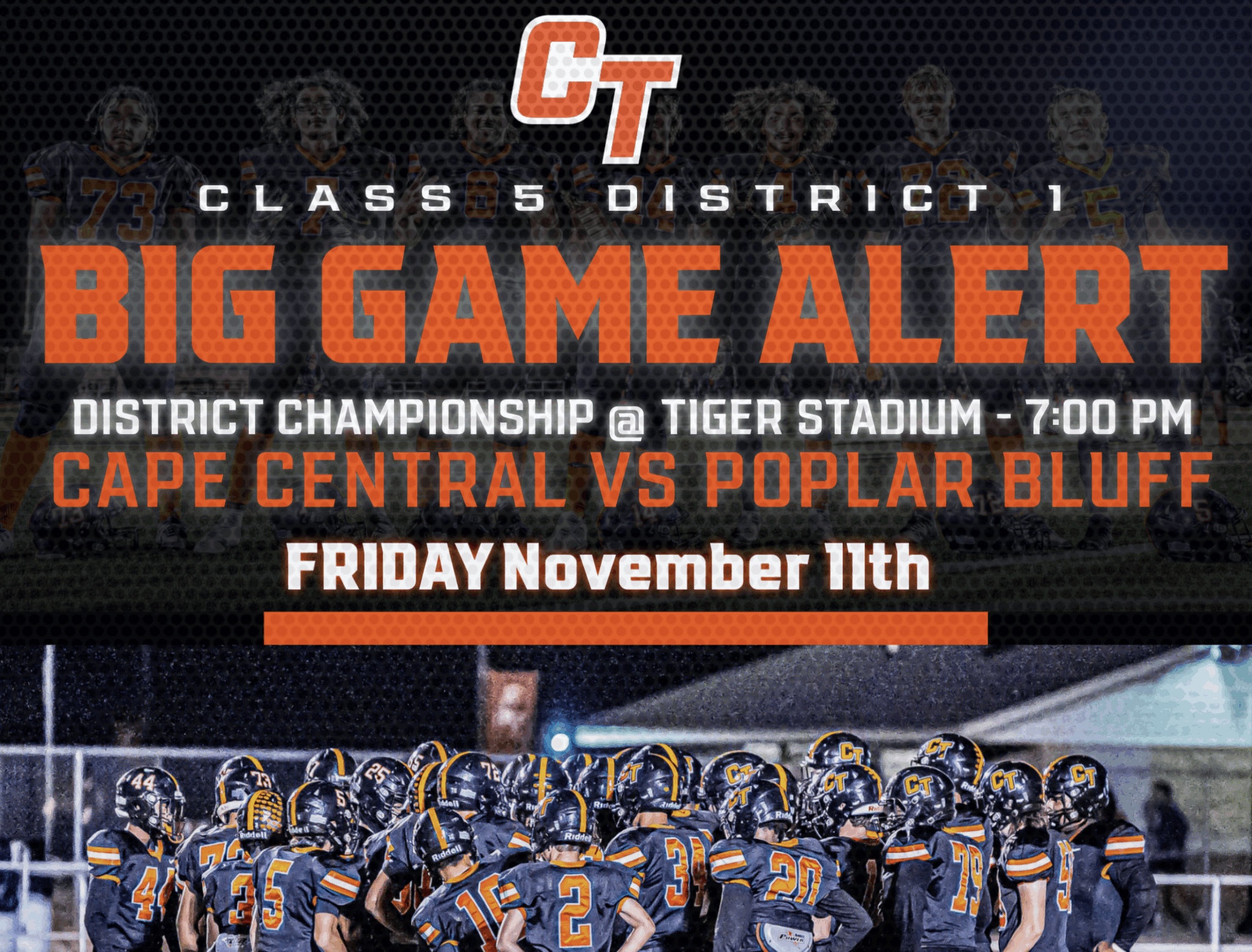 The Cape Central Tigers find themselves in the Class 5 District Championship for the first time as they take on the Poplar Bluff Mules on Friday night.

The Cape Central Tigers have had a wild season.

In just their second year in the District 1, Class 5 bracket, they are now hosting the District Championship game. The number three seeded Tigers destroyed Mehlville 62-7 in the opening round and then played an intense and complete game against Oakville in the Semifinals. It looked like they were going to have to face the dreaded Jackson Indians (the perennial powerhouse that wins the District virtually every year), but the Tribe was upset by the fourth-seeded Poplar Bluff Mules.

That opened the window to the Tigers playing host in the last game of Districts as the highest seed remaining. In the blink of an eye they went from potential impossible underdogs to heavy favorites in Friday’s 7pm matchup.

This is not a game they can take lightly though. The Mules just squeaked by Jackson 21-20 in the Semis, but not getting blown out by 50 points would have been considered a moral victory, so they did something right. Central is going to have to be on their toes if they’re planning on heading to the State Championship playoffs and keeping their season alive.

Poplar Bluff has had a season of two tales. They started out miserably with four straight losses, never managing more that seven points on offense in any game, but flipped the script and won six of their next seven. The offense came alive and changed everything. In their wins they scored 35, 28, 34, 35, 30 and 21 points. A significant improvement to say the least.

The Tigers will want to contain Mason West, who is a threat with his arm and his legs. Last week against Jackson he passed for 214 yards and two TDs in the first half alone. Cape will also have to watch out for Senior Running Back Atari Amos and top Wideout Darious Graham. They both topped 100 yards and scored a touchdown in the previous game.

As for the Tigers, they are going to lean on their big guns. Versatile back Zai’Aire Thomas has 19 total touchdowns and over 1,000 yards rushing on the season, and will be heavily relied upon again in this one. QB Morgan Diamond will look to get him the ball early and often in any scenario, as the duo has been virtually unstoppable this season.

Senior Wideout Clayton McClard will be a huge factor as well. He can get it done through the air or on the ground, as witnessed by his 50-yard rushing score in last week’s win over Oakville. Freshman Keyshawn Boyd has been a nice surprise this year as well, and is a solid change of pace option when Thomas isn’t getting fed on the reg.

Most of these guys play on both sides of the ball as well, so the most talented Tigers are making an impact in multiple ways. As for the pure defensive stalwart, Cayden Butler-Beuchaw has been a beast all season. Look for more of the same on Friday.

The Tigers will host the Mules at 7pm on Friday night in Cape Girardeau.