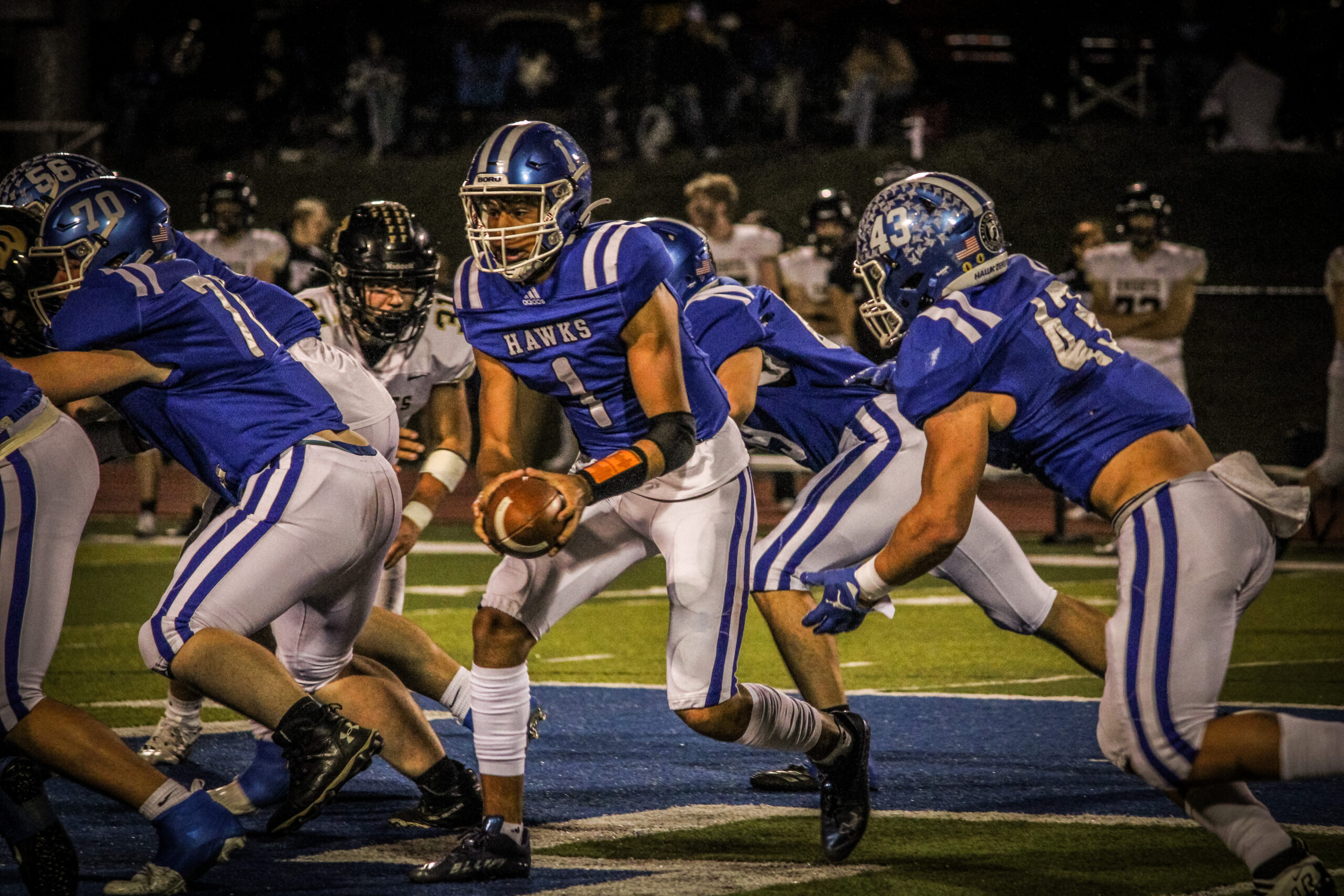 The Hillsboro Hawks slay the Farmington Knight 57-0 on Friday and will take on Festus in the District Final next week.

The Hillsboro Hawks are heading to the District Championship for the second straight year after knocking off the Farmington Knights in convincing fashion on Friday night. The Hawks used their punishing ground game and suffocating defense to run all over Farmington and blank them 57-0 to earn the right to host the Finals next week.

This game was a tale of two themes: running the ball and stopping the run. Hillsboro excelled at both. In a contest where neither team really threw the ball at all, the more dominant running program was going to win the day. And that started early in the first quarter with Tailback Austin Romaine ripping off a 70-yard run for a touchdown, his first of three on the day.

On the next possession for the Hawks, Jaxin Patterson got involved and toted the rock 31 yards into the endzone for a 14-0 lead. That closed out the scoring in the quarter, but left the door wide open for more dominance in the second. In the final six minutes of the half Hillsboro managed three more rushing scores. Romaine again from 40 yards out, Payton Brown from 22 yards out and his brother, Preston Brown, from 48 yards out all found pay dirt. At the half the Hawks were up 36-0.

They didn’t slow down after the break though. Romaine picked up where he left off and opened the second half scoring with a blistering 80-yard dash into the endzone. Payton Brown followed that up with a 34-yard scamper of his own and the Hillsboro rushing attack was just steamrolling the Knights.

Farmington had no answer for the Hawks’ game script, and the fact that they couldn’t get anything going against Hillsboro’s stout defensive front, ultimately spelled doom for the visitors. Cohen Linderer got in on the scoring in the fourth quarter with a 38-yard scamper, which slammed the door on the Knights 57-0.

The win boosted the top-seeded Hawks into the finals and set the stage for a showdown with rival Festus.  Hillsboro attempted just one pass in this one, which went for five yards, but they managed 610 yards on the ground. The defense held Farmington to just 134 total yards and just eight first downs the entire game. The Knights had negative three yards passing on the day.

As for the rushers, Romaine led the way with a ridiculous 204 yards and three scores, while Patterson racked up 123 of his own and a touchdown. Payton Brown was nipping at his heels with 97 yards and a pair of TDs. Eight players in all took handoffs from QB Preston Brown and lit up the scoreboard with eight total touchdowns.

Defensively, in a bizarre stat, Hillsboro actually lost the turnover battle 1-0, but the defense never broke in this one. In fact, they barely even bent. Payton Brown led the team with seven total tackles, while Patterson had six and Romaine had five. Alex Medina registered the game’s only sack.

Now the Hawks will have a week to get ready for their bitter rivals in the District Championship game. The Festus Tigers upset the North County Raiders (the team that bounced the Hawks in last year’s final) on Friday night, so they will travel to Hillsboro with a trip to the State Playoffs on the line.

Kickoff is on Friday, November 11th at 6pm. This one should be a barn-burner.