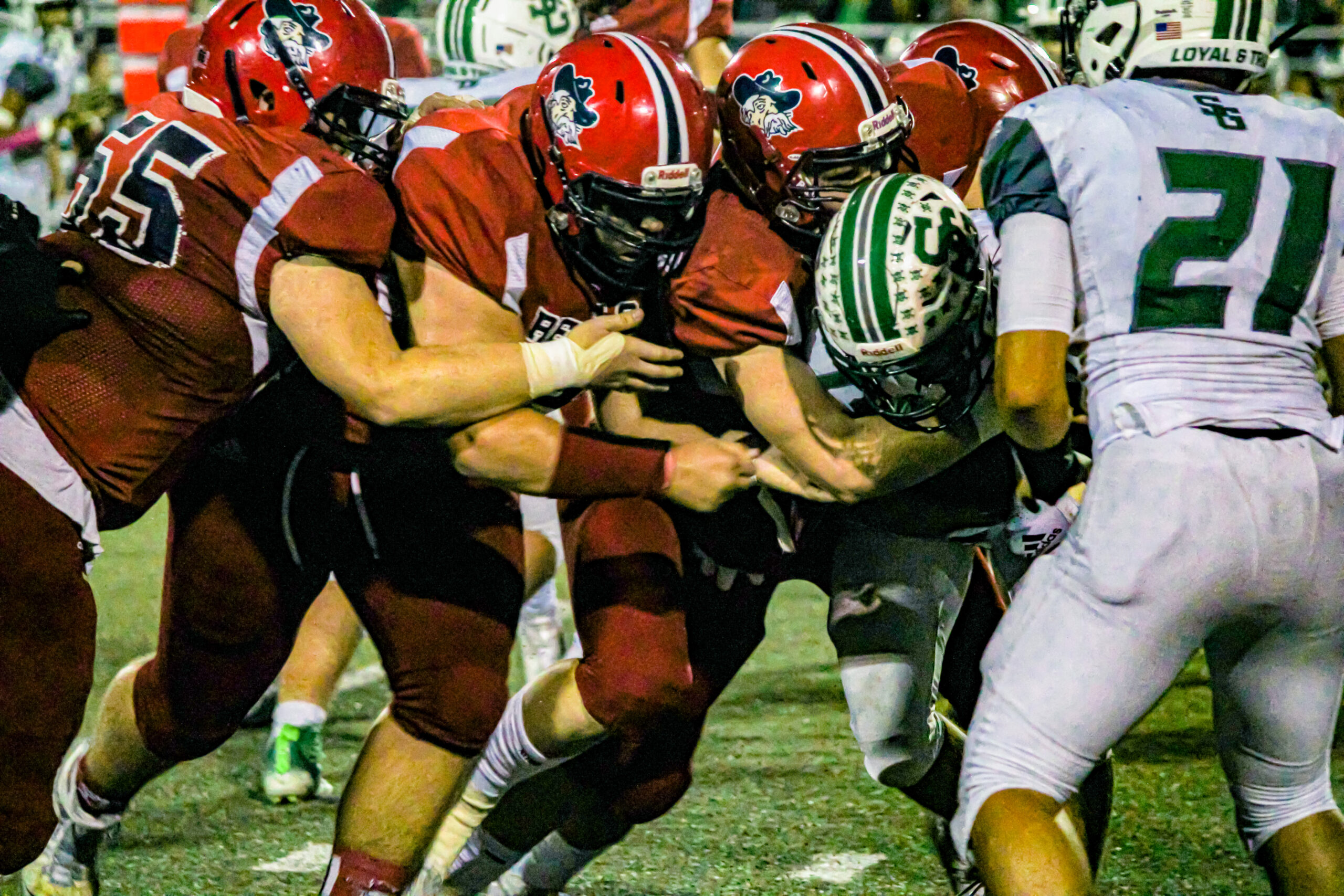 The Rebels stomp out the Dragon’s undefeated flame, as Central Park Hills rolls over Ste. Gen in a stunning offensive showcase 45-3.

It was a battle of two undefeated schools this past Friday, September 23rd, as the Central Park Hills Varsity Football team hosted Ste. Genevieve. Both teams entered the game on an incredible 4-0 undefeated streak. The Central Rebels and the Ste. Gen Dragons were averaging 44 and 54 points respectively, while also playing stifling defense.

However, on Friday, only one could remain undefeated. Normally the first out of the gate, Central had an atypical slow start. Ste. Gen received the ball and drove for four minutes to get into field goal range, which kicker Bryant Schwent blasted through the uprights from 29 yards out to jump on top with a 3-0 lead.

Playing from behind for the first time all season, the Rebels may have felt the pressure as they had a bad snap to set them back on their first offensive play. A penalty on a converted fourth and one also was seemingly a bad omen as Ste. Gen forced Central to punt on their first possession.

However, punter and Quarterback Casen Murphy belted a 68-yard punt to flip the field which allowed the Rebel defense to force a three-and-out of their own. That Dragon punt was returned by Jobe Bryant 61 yards for a touchdown. Kicker Mason Williams added the extra point and set the score at 7-3 in favor of the Rebels after one-quarter of play.

There was no looking back for Central at that point, as the Rebels owned the second quarter. It was a 31-point quarter that started with a safety on the Dragons’ second play. That made the score 9-3 and gave the Rebels the ball back. Shortly after, Murphy hit Caden Casey on a spectacular throw and catch down the left sideline for 35 yards which set up Bryant for a 13-yard touchdown run. Williams added the kick to make it 16-3.

Then the wheels fell off for Ste. Gen, as they had to give the ball back yet again. That led to Murphy hitting Kendall Horton for a 30-yard touchdown, and then on the next possession found Kannon Harlow for a 23-yard score. Finally, he connected with Bryant for a 39-yard touchdown, as Central scored on three consecutive possessions. Williams kicked the point after for the first two, and Bryant ran the two-point conversion on the last one to put the Rebels up 38-3 at halftime.

The Dragons’ offense never got going. The Rebel starters played one more possession to open the third, and Murphy was able to hit Bryant again on a 39-yard scoring strike. Williams added the extra point again, making the score 45-3. That would be the last points put up from either side.

Before this night, Ste. Gen was averaging over seven scores per contest, so holding them to just one was a stellar performance for the Central defense. Sammy Callaway led his team with six tackles and forced the field goal on the first drive when he tackled Dragon Quarterback Aiden Boyer for a five-yard loss on a third and goal.

Ste. Gen had a rough night offensively. Boyer only succeeded in passing six out of 15 times for 83 yards. Rushing, the team netted only 54 yards. Hayden Ford led his team with 39 yards on four carries, while Jack Farlow had 30 yards on five carries.

Now boasting a perfect 5-0 record, Central will have to gear up to face yet another undefeated team as the Rebels will travel to Valle Catholic next Friday to take on their league rival, the 5-0 Warriors. Valle is fresh off a whipping of St. Vincent 67-7 so this will without a doubt be another battle of the behemoths.

Meanwhile, now at 4-1, Ste. Gen will square up with 2-3 Potosi. The Dragons will play host to the Trojans in Week 5, as high school football continues, next Friday, 9/30.