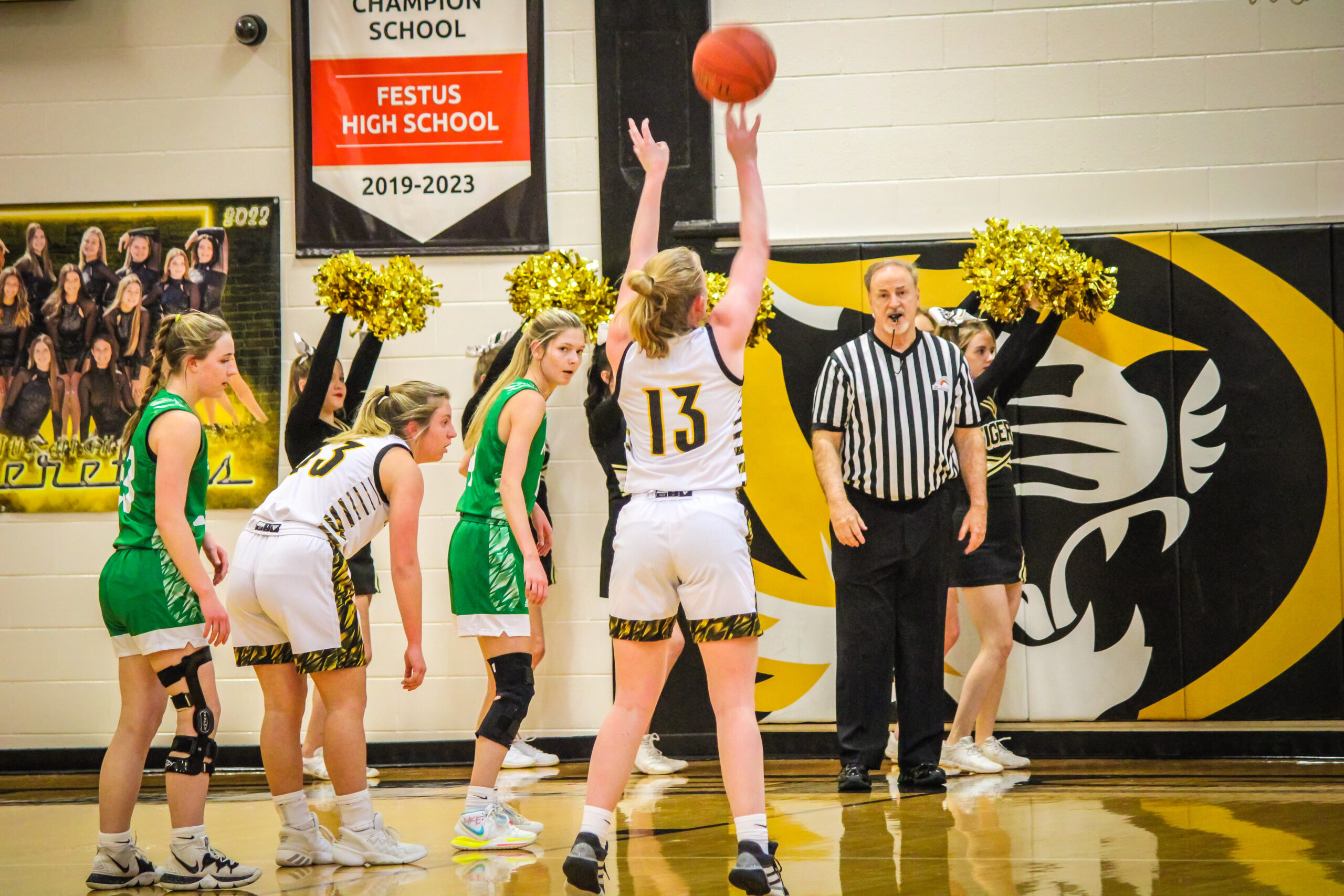 The Lady Tigers of Festus stay hot as the Varsity Basketball squad wins its fourth straight by knocking off DeSoto and Mehlville.

The Festus Tigers Girls Varsity Basketball squad stayed hot this week as they followed up two Christmas Tournament wins with another pair of victories after the Holiday break. They took down DeSoto 52-32 in a dominant win on Monday before raining on Mehlville’s parade, 56-47, on Thursday.

The first game pitted the Tigers against a struggling DeSoto squad and it didn’t take long for Festus to establish its dominance. The offense was put in place early with a 14-point first quarter, and the Tiger defense was no slouch either as they held the Dragons to just six. They followed up that performance with ten points in the second, but DeSoto tightened things up with nine-spot of its own to make the score a more manageable 25-15 heading into the half.

Festus didn’t feel like resting on its laurels though, as they brought it out of the gate in the third quarter, putting up 14 more and holding the Dragons to just eight. Working the full-court press throughout the majority of the game, they snuffed out pretty much any attack DeSoto could muster. That included a 14-9 fourth quarter, paving the way for the 52-32 victory.

The Tigers never allowed double-digit points in any quarter, and spread out their offense over eight scorers for a balanced attack. Josie Allen led the way with 12 points and had six steals, while Kinsey Benack narrowly missed a double-double with 10 points and nine rebounds. Defense was key in this one and Emily Holt‘s strong all-round game was a big factor, as she totaled eight points, six rebounds and an incredible 11 steals.

Head Coach Steve McFarland was blunt yet positive in his comments saying, “Our key to victory was our full-court ball pressure. We learned that we have to come ready to play every night.”

Next up were the Mehlville Panthers, who posed more of a threat than DeSoto, but were still no match for the Tigers. The first quarter didn’t tell that story though as Mehlville came out firing, putting up 21 and holding Festus to just 11. The Tigers needed to adjust their game plan if they were going to fight back in this one, but naturally, Coach McFarland had a solution.

“Mehlville came out hot and we had to make a couple defensive adjustments to slow them down. Then on the offensive side of the ball, we had to adjust to their 6’4 post defender in the middle of the lane.”

It worked. The Tigers put together a 14-9 second quarter and trimmed the Panthers’ lead to 30-25 at the half. They applied that same system after the break and took down the third quarter 15-12 before dominating the fourth 16-5. The impressive comeback showed the Tigers’ resolve and proved that they can win in a multitude of fashions.

Coach McFarland followed up on the winning effort, saying, “We probably did the best we have all year at working the ball and running offense. Only 9 turnovers for the game. These girls are capable of adjusting to do what is necessary to win.”

The usual standouts were on full display and the three-point shooting game was a big factor in the win. Allen led the way again with 16 points and hit three from beyond the arc, and nipping at her heels was Mya Courtois with 15 and three of her own from downtown. Then there were the dominant forces on both ends of the court in Benack and Holt, with both recording double-doubles. Benack had 11 points, 10 rebounds, five assists and three steals, while Holt had 11 points as well and led the team with 13 boards and three steals.

The win was the fourth in a row for the surging Tigers and they now sit at 11-3 on the season. Their next challenge will be at Seckman on 1/11 as they look to make it five straight.