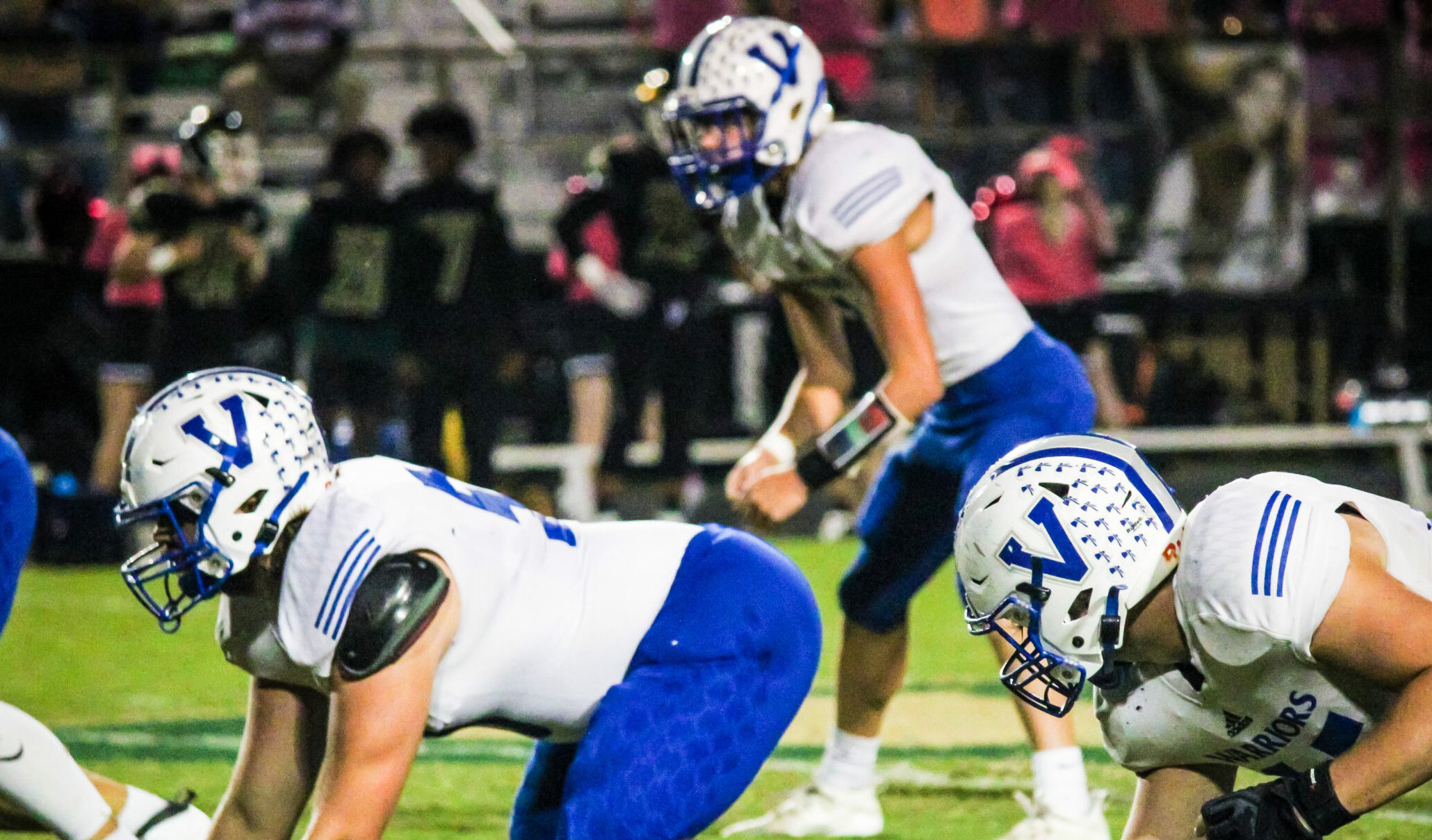 The Valle Catholic Warriors Varsity Football team shines in 2021 with a perfect regular season and a trip to the District Finals.

The Valle Catholic Warriors had an incredible run in 2021. The Varsity Football team added yet another perfect regular season to their resume in dominant fashion, and made it all the way to the District Finals.

Sadly, the final game was a forgettable one. The Warriors, having moved up to Class 3 from Class One in 2020, had to take on a beast of a St. Mary’s team that had moved down from Class 4 (and frankly probably belong in Class 5), and the disparity showed. St. Mary’s came out with a bang and hung three first-quarter passing touchdowns on the Valle defense for a quick 21-0 lead.

The Warriors then answered back in the second when defensive standout Josh Bieser used his arm and zipped a pass to Aiden Heberlie for a 35-yard score. Valle was back in it with plenty of time and now trailing 21-7

Unfortunately, St. Mary’s countered with a passing TD of their own and made the score 28-7 heading into the half. The second half would not be kind to the Warriors either, as Valle just couldn’t seem to get a rhythm going in this one. St. Mary’s opened the third with a pair of big-play passing touchdowns, going for 95 and 61 yards respectively, and blew the game wide open.

As if the 41-7 deficit wasn’t insurmountable enough, St. Marys went into clock-killing mode and used their ground game to punch in two more scores. One in the third and another in the fourth made the final score 55-7, ultimately ending Valle’s season.

But that shouldn’t be the focus here, because this season was one of heart, grit and success. The Warriors were a force to be reckoned with this year as they put up 546 points and only allowed 161 to opponents. That’s an astounding 49.6 points per game while allowing just 14.6, and Valle dominated the turnover battle as well. They themselves turned the ball over just 15 times in 11 games and managed to create 27 takeaways from their consistently outmatched opponents.

During their perfect regular season they pitched four shutouts, one of which was a 46-0 blanking of their crosstown rivals the Ste. Genevieve Dragons. The Warriors also faced the Dragons in the District playoffs and ended their season with a convincing 69-35 win. The team also managed to win the 600th game in program history this year, which goes without saying, is a remarkable achievement. Even for a franchise as storied and respected as Valle.

As for the standout individual achievements of the Warriors in 2021, Grant Fallert did a very impressive job of taking over the quarterback position after Chase Fallert went down with an injury. Grant stepped in and went 48-0f-83 for 756 yards and 14 touchdowns against just three interceptions in a truncated season.

The ground game was mostly handled by other-worldly running back Bryce Giesler, who turned 164 carries into 1,722 yards and a whopping 26 touchdowns. That’s a 10.5 yards per carry average, which even the most novice of football fans knows is extraordinary. To boot, he had 12 catches on the season for 277 yards and three scores. Playing both ways, Giesler also managed 41 total tackles and an interception.

In regards to the receiving core, Heberlie was the true standout. He led the team in catches (39) and receiving yards (689) and racked up 12 touchdowns through the air. He chipped in on defense as well with 28 total tackles, an interception and 13 pass breakups.

For the purely defensive side of things, the three-pronged dagger of Bieser, Michael Okenfuss and Carson Tucker were incredible this year. Bieser led the way in tackles with 81, with 23 going for a loss, and also had four sacks, three forced fumbles and four fumble recoveries. Okenfuss led the team in sacks with 13 and totaled 57 tackles (26 for a loss) and forced four fumbles, while pressuring opposing QBs 32 times. Finally, Tucker managed 67 total tackles with 16 for a loss and recovered two fumbles, broke up four passes and pressed the quarterback six times.

The Warriors also had an impressive 12 players named to the 2021 Missouri All-Independent team. See below:

It was a truly amazing season for Valle despite the bittersweet ending, but you can be sure that Head Coach Judd Naeger, who impressively won his 200th career game this season, will have next year’s group ready and waiting to start their next State Title run. The best way to get the sour taste out of your mouth? …Practice.

A little patience and a lot of practice should translate to a lot of wins in 2022.

Congrats to the Valle Catholic Warriors on an admirable and impressive season.