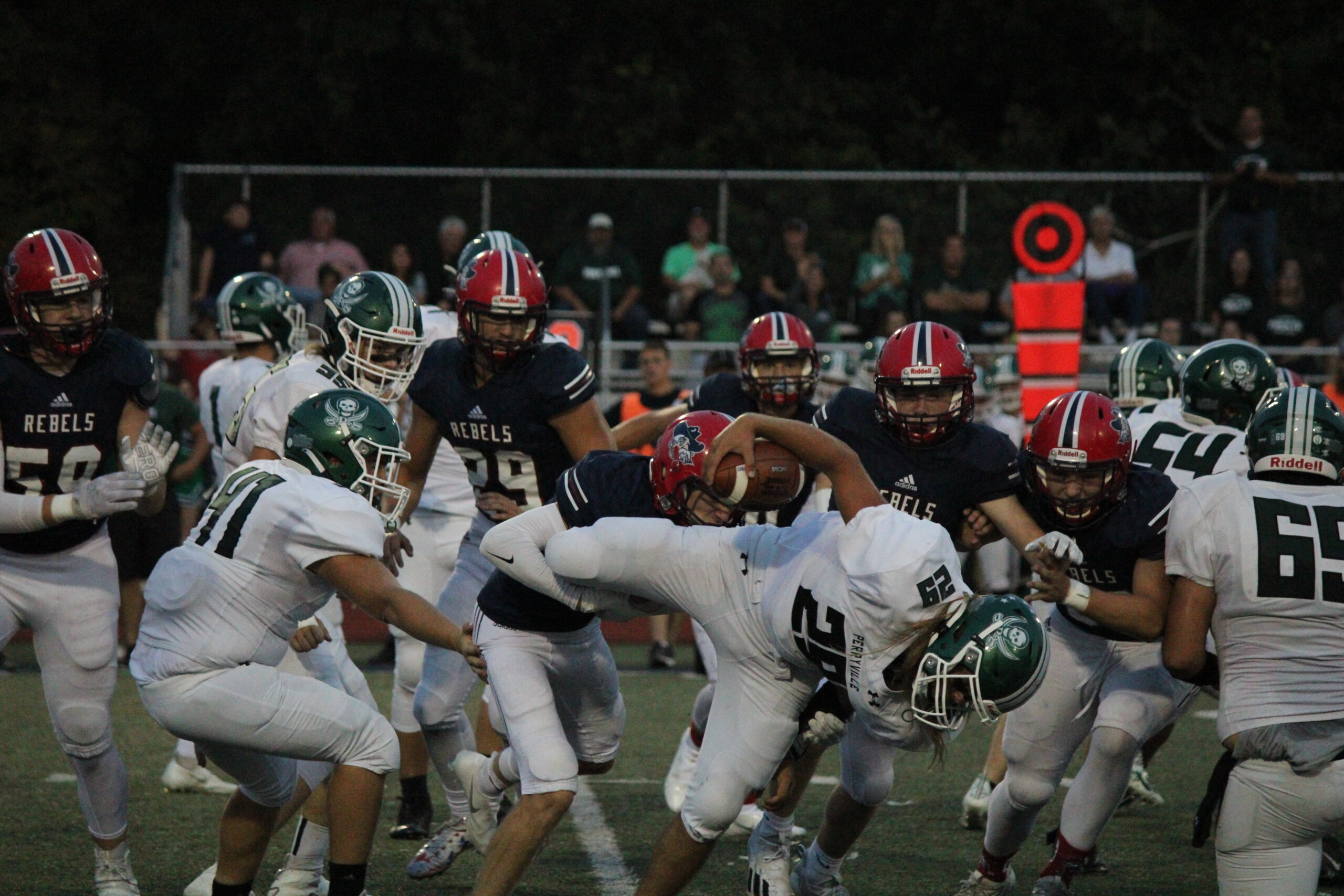 The Park Hills Central Rebels Varsity Football squad annihilates the Perryville Pirates in a 76-0 win to bring their record to 2-1 on the season.

On Friday, September 10th, the Park Hills Central Rebels Varsity Football team played the Perryville Pirates at home in their first district game of the season. Coming off a high-scoring, heart-breaking, last second loss to MICDS, the Rebels came in to this game with the Pirates fired-up and they cruised to a 76-0 blowout.

Things started off hot for the Rebels. In fact, the defense got the scoring going first as they recorded a safety at 9:39 of the first quarter.

On the ensuing kickoff, Jobe Bryant returned it for a touchdown, but it was called back due to a block in the back penalty. Dayshawn Welch then punched it in from 12 yards at the 8:52 mark to make it an early 9-0 lead.

Bryant then recovered a Perryville fumble on the following kickoff. This gave Welch a chance to score again quickly. This time carrying it 21 yards for a touchdown, making it 16-0, with 8:13 still to go in the first quarter.

After a quick stop by the defense, Jett Bridges was able to pound it in from the one-yard line on a quarterback sneak, to make it 23-0.

The defense held strong, and after a big 36-yard punt return from Bryant, Welch took the ball in to the endzone from 23 yards out to score another touchdown. After one quarter, the score was 30-0.

In the second quarter, Bridges was able to hit Grant Manion for 28-yard touchdown, extending the lead to 37-0, with 8:33 left in half.

Defender Troy Harris recovered a fumble getting the ball back for Central. On the next possession, Welch carried the ball 30 yards in for a touchdown. The extra point missed, making the score 43-0.

Ruger Sutton scored the final touchdown of the quarter on a seven yard carry, putting the first half score at 50-0.

Central continued to dominate in the second half as well. This time it was Casen Murphy with a huge 56-yard run to score another TD, making it 57-0.

Kannon Harlow recovered a fumble to get the ball back for Central. This allowed Murphy to connect with Bryant for a 39-yard touchdown pass for a 64-0 lead, still with one quarter to play.

Freshman Jaxon Jones got in on the action in the fourth quarter, carrying the ball 20 yards for a touchdown.

The final touchdown of the game came when Jones threw an 18-yard touchdown pass to Jailen Welch. The extra point missed, so the final score of the game was 76-0.

D. Welch commented after the win, and said, “We are playing very well as a team. There are some things we messed up tonight, but we kept going and playing really hard. The rest of the season will be really good for us. We just got to keep practicing to get better.”

Slade Schweiss also noted, “We’re just improving everyday and getting better at the little things that go unnoticed. We have a talented group that I believe can make a run if we keep improving day-by-day.”

The defense was impeccable. The Rebels never gave up a first down, and allowed less than 10 plays in which Perryville had positive yardage, including scoring on a safety. That is unheard of defensive dominance.

Central will now prepare to host Cuba this Friday, September 17th, as they look to build on their incredible performance, and improve on their now 2-1 record.