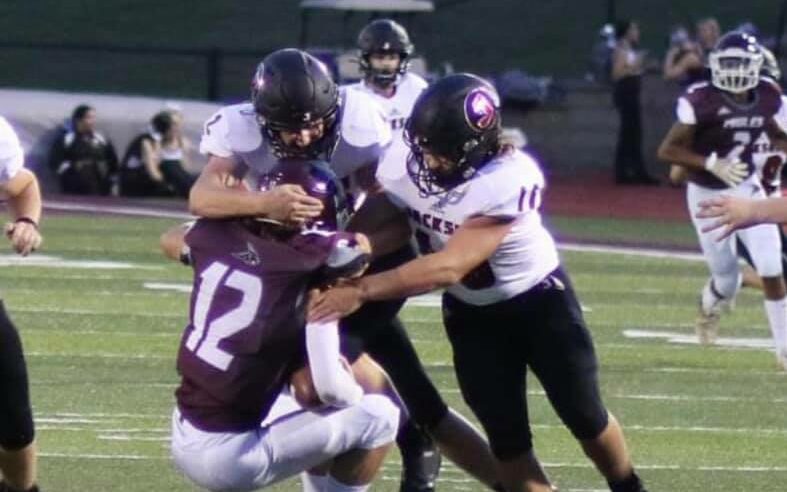 The Jackson Indians Varsity Football team keeps their perfect season alive after moving to 3-0 with a 50-32 win over the Poplar Bluff Mules.

The Jackson Indians Varsity Football team retained perfection on Friday night as they moved to 3-0 on the season after a grueling 50-32 win over the Poplar Bluff Mules. Poplar Bluff was coming off a big shutout win over Bishop DuBourg last week, but (like so many teams do) ran into a buzzsaw in the form of the mighty Jackson Indians.

The defending State Champions wasted no time in this one, as they came out firing in the first quarter.  Barely a minute into the game, stud Quarterback Cameron Marchi found one of his favorite targets in Kannen Turley for a 63-yard bomb. Three minutes later he hooked up with Isaiah Davis for a six-yard strike, and just like that it was 14-0.

Poplar Bluff answered at the end of the first with a 15-yard TD pass, but Jackson blocked the extra point try, leaving the score at 14-6 after 12 minutes of play. Then, the second quarter started out just like the first as the Indians hit the repeat button. Marchi to Turley again for a 30-yard TD followed by Marchi to Davis again for a 12-yard score. The Mules would answer with a TD of their own about four minutes later, but Jackson put the cherry on top of the half with Marchi and Turley hooking up for a third time before the clock ticked down. After 24 minutes the Indians found themselves up 42-12.

Because of their sizable lead, the second half became about clock management and smart football.  Poplar Bluff managed to find the endzone twice in the third quarter to make it 42-26, but the defending champs did a nice job of bending without breaking. Then it was Marchi’s turn once again to put the dagger in Poplar Bluff’s heart. It was with his legs this time though, as he scrambled for a three-yard score and then found who else but Turley for the two-point conversion to make it 50-26.

The Mules would cross the goal line once more, but it wasn’t nearly enough as the Indians hung on for a 50-32 victory. Marchi was sensational in this one going 18-of-27 for 286 yards and five touchdowns against just one interception. A big reason for that success was the blockbuster game for Turley, who grabbed seven balls for a staggering 192 yards, three TDs and a two-point conversion. Davis was clutch as well with four grabs and two big TDs, while Tony Williams handled the ground game, killing valuable clock and moving the chains with his 16 carries for 90 yards.

Turley spoke after his monster game saying, “I think that we started the game really well. I believe we need to work on everyone’s blocks and reading the blocks, and also finishing the game strong.”

This was an intensely physical game and both teams took a beating on the field, but the Jackson defense rose to the challenge. As a whole they racked up three sacks, 13 tackles for a loss, an interception and a fumble recovery. Despite allowing 451 total yards they held a very potent Mules offense off the scoreboard when it counted. Griffin Horman led the way with nine tackles (six assists, two for a loss) and recovered a fumble. Gavin Guilliams had three tackles and an INT and Fisher Stevens had six tackles (two assists, one for a loss) and a sack.

This was by far the closest game the Indians have played this season, and a physically punishing one to boot, but they are still undefeated and never seemed to be in much jeopardy of losing this one at any point. That makes 17 consecutive wins dating back to the start of last season’s championship run.

Next week they return to their home field to take on the Tigers of Cape Central.  Kickoff is at 7 pm on Friday, September 17th in Jackson.