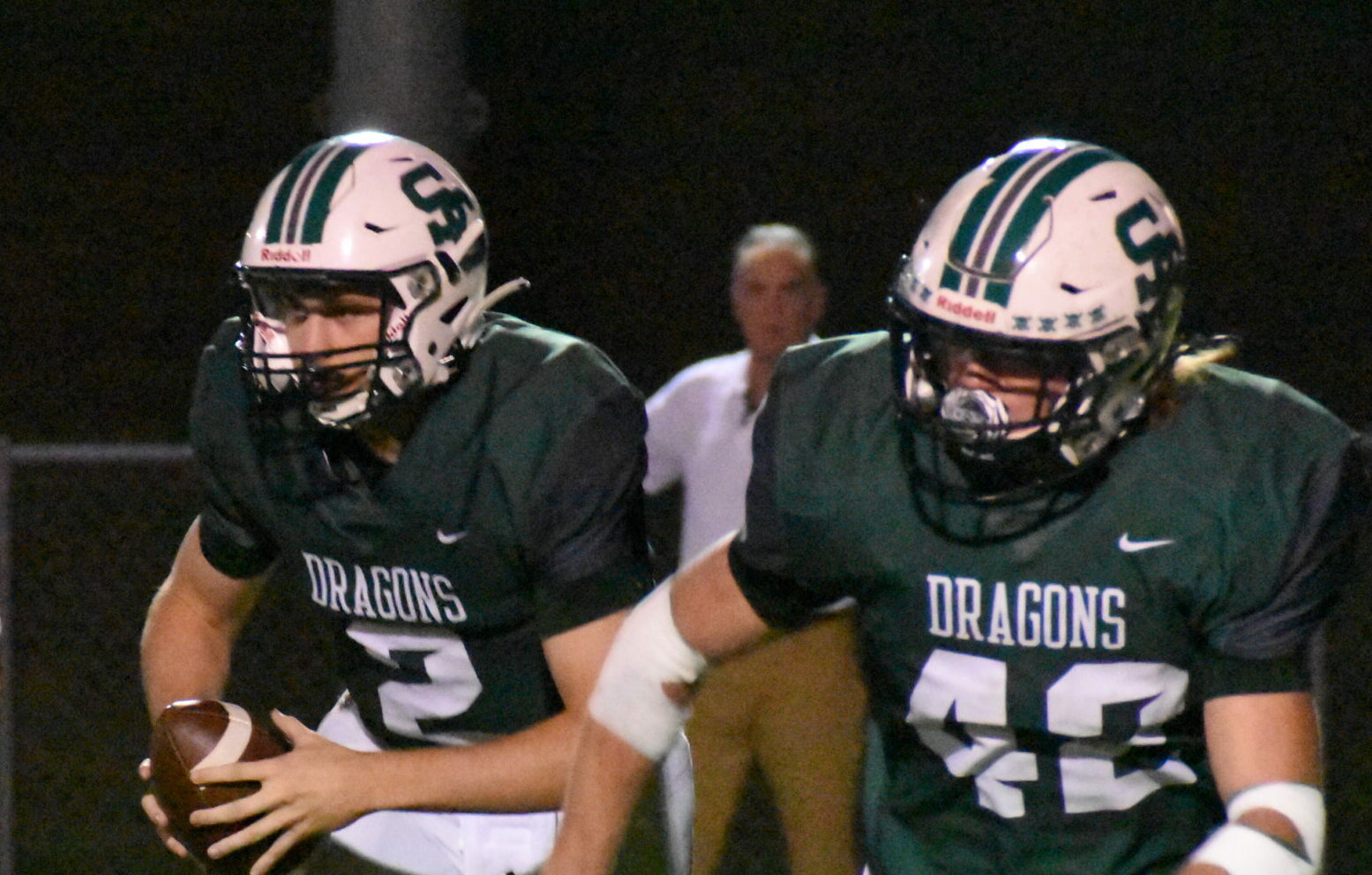 Boyer’s Five Touchdown Passes Not Enough to Get Ste. Gen Past Kennett

The Ste. Genevieve Dragons Varsity Football team falls 40-38 in a heart-breaking game against the Kennet Indians on Friday. Ste. Gen looks to bounce back next week when they travel to Potosi to take on the Trojans on Friday, September 17th.

The Ste. Genevieve Dragons Varsity Football Team lost a close one to the Kennett Indians 40-38 for their second consecutive loss.

This was a long game that featured many ups and downs for both sides. Ste. Genevieve took the initial lead early in the first quarter. Aiden Boyer pitched a ball out of the option to his running back Austin McBride who hustled 13 yards into the end zone and put the Dragons up 6-0. However, Kennett struck back shortly after with a 38-yard touchdown pass that came on fourth down. They converted their two-point conversion and look an 8-6 lead. Ste. Gen was not ready to surrender the lead just yet. Boyer launched a 64-yard bomb to Kaden Flye who found the end zone and wrestled the lead back. The Dragons led 12-8 after the first.

The Indians took advantage of a sluggish second quarter by the Dragons. They methodically marched down the field twice in a row for touchdowns each time. Just like that, they were ahead 22-12, as Ste. Gen struggled to find an offensive rhythm in the second. However, they did draw up a nifty play that allowed Boyer to hit Kaden Buatte for a 19-yard touchdown pass just before the clock expired. They went into halftime down 22-18.

Kennett came out of the half firing. They scored a rushing touchdown and an 11-yard passing touchdown and increased their lead to 34-18. Ste. Gen was not going to go down easy. Boyer helped them fire right back with a 48-yard touchdown pass to Flye that cut the lead to 34-26. Boyer wasn’t done yet. He found his cousin Zach Boyer on a 29-yard touchdown pass that pulled the Dragons within two points. Kennett’s coach took exception to the officiating and got ejected in the third, but Ste. Gen did what they could to take advantage.

As time ticked down the game grew more intense. The Indians were able to find the end zone once more and took an eight-point lead. Aiden Boyer was doing everything he could to keep his team in the game. He threw his fifth touchdown pass of the game to Zach Boyer from 61 yards out which cut the lead to just two. They struggled to convert their two-point conversions all night and that was the case here. The Kennett lead stayed at two and eventually time ran out. In a heart-breaker, Ste. Gen fell to the Kennett Indians 40-38.

“I thought the team did a really good job of just fighting all the way through the game on offense and defense,” Jacob Johns said. “If we continue to play at the level we played tonight, even though it was a loss, I could see us being very successful down the line.”

The loss puts the Dragons at 1-2 on the season. This was a much better showing compared to their loss to Valle, despite the outcome. This team is going to continue to learn and get better as the season moves along. They look to get back to .500 next Friday, September 17th, when they travel to Potosi to take on the Trojans.

Boyer’s Five Touchdown Passes Not Enough to Get Ste. Gen Past Kennett