Ste. Gen Falls to Valle in the Old Settlement Game

The Ste. Genevieve Dragons Varsity Football team loses 46-0 to their cross-town rivals the Valle Catholic Warriors. They look to get back on track and grab their second win of the season on Friday, September 10th against Kennett.

The Ste. Genevieve Dragons Varsity Football team fell victim to the Valle Catholic Warriors 46-0 on Friday for their first loss of the season.

It was a long night for the Dragons. Valle asserted their dominance early in the game and did not let the Dragons breathe. The Warriors Chase Fallert was Ste. Gen’s worst enemy. He threw a touchdown pass and also found the end zone with his feet in the first quarter alone. Valle led 14-0 after one.

Fallert continued to help his team pile it onto Ste. Gen in the second quarter. He ran in two more touchdowns in the second. Valle’s Bryce Giesler added a touchdown on the ground as well and the Dragons went into the half behind 33-0. 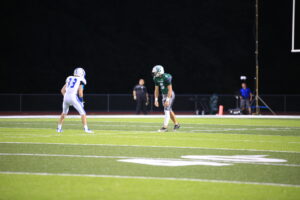 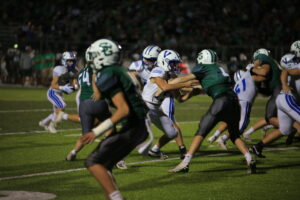 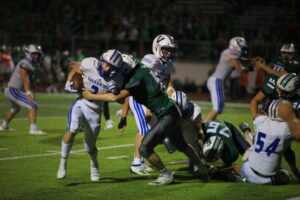 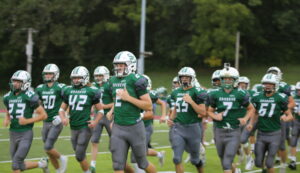 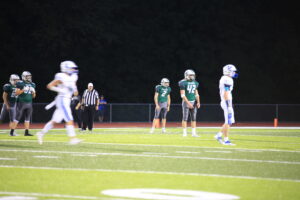 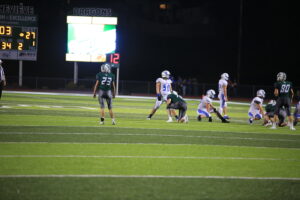 Ste. Gen continued to struggle in the second half. Their defense did a better job of containing Valle, but the lead was too much to overcome. The Warriors ran in one touchdown in the third and fourth quarters before sealing up the 46-0 victory.

“To be honest, there were not many positives from the game,” Kaden Buatte said. “It’s one of those where we just have to reset and get back to business next week. The team that played tonight is not the Ste. Gen team that we are.”

The numbers were all but flashy. Aiden Boyer passed for 68 yards and threw two interceptions. He also added 18 rushing yards. Zach Boyer led the team with 29 yards on three carries. Wyatt Springcamper had 25 yards on the ground as well as 34 receiving yards. Ste. Gen only had 143 yards of total offense.

Tanner Weiler led the Dragons in tackles with eight. Mason Nix had four tackles and one tackle for a loss. Kaden Flye and Klayton Squires each picked up three tackles. Valle racked up 483 yards of total offense.

After a loss of this caliber, it is best to learn from your mistakes and move on to week three.

“I think that we saw our best competition on our schedule,” Thomas O’Brien said. “We will watch the film and get ready for next week.”

The latest edition of this cross-town rivalry did not go the Dragons’ way. That makes it three losses in a row to Valle, all by a comfortable margin.

“Always hard to lose against them,” Jacob Johns said. “We got them to fourth down on multiple occasions and were never able to get them off the field. If we can limit that and get some fourth-down stops on defense it would be huge.”

Ste. Gen now sits at 1-1 with possibly their toughest game of the season behind them. A lot can be taken away from a loss of this caliber. The Dragons will tune some things up and be back at it again next week. For their next challenge, they take on Kennett at home on Friday, September 10th at 7 pm.

Ste. Gen Falls to Valle in the Old Settlement Game