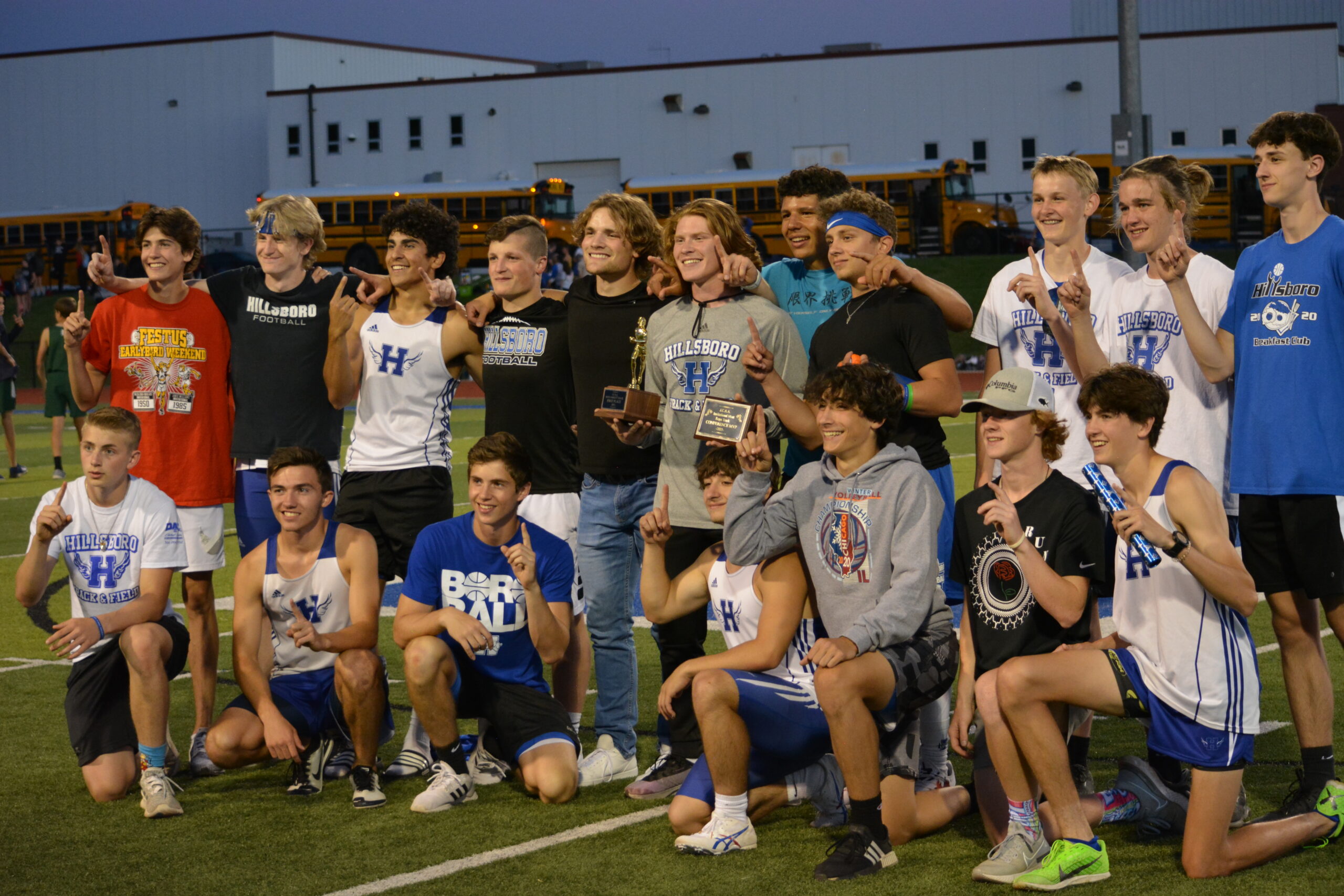 The Hillsboro Boys Track and Field team earned themselves first place in the JCAA Conference Meet over the weekend. The Hawks found themselves tied with rival Festus with one event left to go and didn’t disappoint. The boys had battled hard both days of the meet and it all came down to the 4×400 Relay. The atmosphere was electric even before the crack of the starting pistol, with both schools’ entire teams lining the infield to watch. The Hawks took the race and the Conference Championship.

“The excitement and electricity for that last race is something that I’ve been a part of a few times previously, but it never gets old,” said Head Coach Todd Medely. “With Payton Brown coming in 2nd in Javelin, Zach McNees taking 3rd in Javelin and Discus and Tristan Jones going 3rd place in Long and Triple Jump, it was a total team effort for sure. [Patrick] Lee took 5th in High Jump, and Chase Sucharski scored a point in long jump as well. Everything turned out being important.”

Sam Wright was named Conference MVP thanks to a 40 point performance. Wright ran an 11.30 second 100 Meter Dash in the finals, and Cruz Valencia was right behind him with an 11.41. The one-two punch of Wright and Valencia was instrumental in the Hawks success at this meet, as they also finished first and second in the 200 Meter Dash with times of 22.49 and 23.14 respectively.

“Starting after I was told that our season would be cancelled, I started putting extra work in,” said Wright about his goals for the season. “[I had big goals for this season], and Conference Champs was one of the goals. All my hard work paid off tonight and I am so happy that it worked out in our favor as a team.”

The Hawks would not have been in a position to take first place had their distance runners not won the 4×800 Relay the day before. Jonah Allison, Josh Allison, Jesse Gore and Orville Mann managed to beat Festus with a time of 8:23.04.

The 4×400 Relay was where the entire event came to a head though. The team of Valencia, Mann, Dylan Mooney and Jonah Allison were able to just squeak by the Tigers’ 3:35.77 with a time of 3:34.31 in an absolute nail-biter of a race.

Valencia was quick to point out his teammates’ efforts, saying, “We have an amazing group of runners that work their butts off, and I can’t wait to see where the team goes.”

Hillsboro hosts their final regular season meet of the year on Friday May 7th, and the Class 4 District meet on Saturday May 15th.