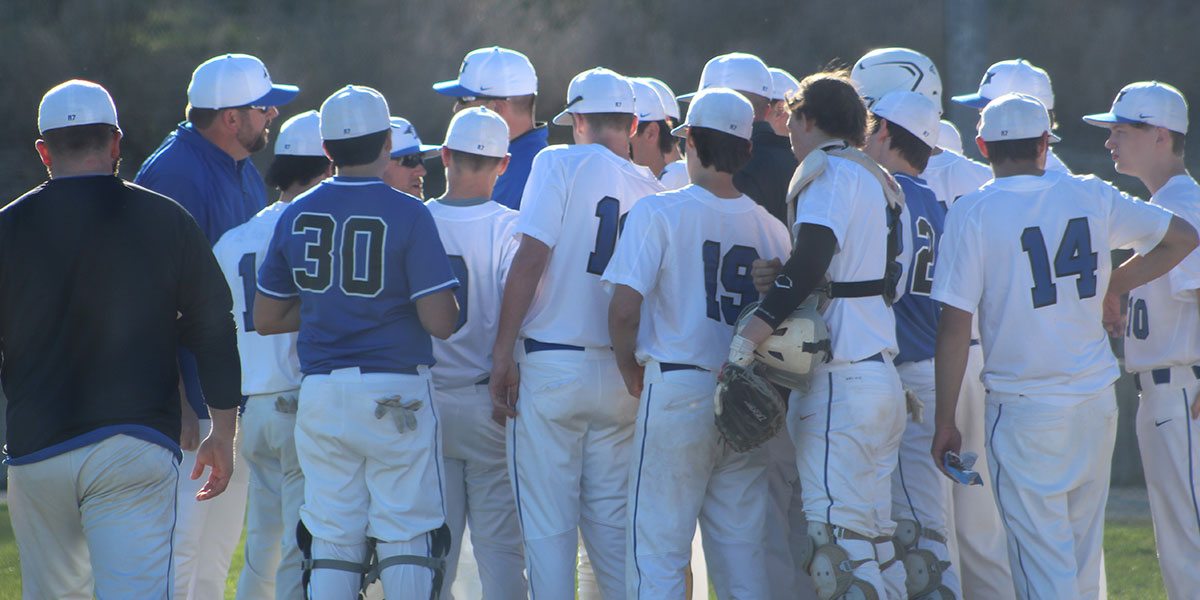 The Jefferson R7 Blue Jays bump their record to 7-6 with wins over West County and Fredericktown in the Fredericktown Wooden Bat Tournament over the weekend. Jefferson’s next challenge comes Tuesday, April 20th against Herculanuem.

The Jefferson R7 Blue Jays Varsity Baseball team went 2-1 with wins over West County and Fredericktown in the Fredericktown Wood Bat Tournament over the weekend.

The Blue Jays had a solid weekend, but it did start off with a loss to the Arcadia Valley Tigers on Saturday. The Tigers jumped ahead 2-0 early in the second inning. Jefferson cut the lead in half in the bottom of the second when Will Schnitzler scored on a fielder’s choice.

Arcadia added another run to their lead in the fourth and went ahead 3-1. Sam Stokes led off Jefferson’s half of the fourth with a solo home run to left field, and then the Blue Jays evened the score when Jack Hueter ripped an RBI double to right field. It was 3-3 by the end of the fourth.

However, the Tigers added two more runs in the top of the fifth inning and Jefferson was unable to recover. Arcadia Valley won 5-3.

Colton Richardson led the Blue Jays with two hits. Stokes was 1-3 with two RBI and scored a run. Hueter, Colby Ott, Dylan Schnitzler and Dawson Jakoubek all picked up one hit.

Dylan Schnitzler started the game on the mound for the Blue Jays. He only threw six pitches and gave up one hit. Jaokoubek pitched an inning and two-thirds in relief. Nolan Roth and Ott also saw time on the mound.

The Blue Jays bounced back later in the day Saturday against the West County Bulldogs.

Jefferson established themselves right away in the bottom of the first inning. They loaded the bases before Jakoubek scored the first run of the game off a Bulldog error. Stokes singled the next at-bat, which brought another run across the plate. West County committed another error and Daylen Whitener smoked a two-RBI double to left field that put the Blue Jays ahead 5-0.

“I think we had great energy in the dugout,” Ott said after the win. “And very good approaches at the plate.”

Ott was dominant at the plate. He was 4-4 with one RBI and scored two runs. Stokes, Jakoubek and Whitener all picked up two hits each. Stokes had three RBIs and Whitener led the team with four. Will Schnitzler had the team’s only other RBI.

Dylan Schnitzler started the game on the bump and went the distance. He threw six innings, allowed four hits and struck out six batters.

The Blue Jays carried the momentum from the win over into Sunday’s matchup against the Fredericktown Blackcats. However, the Blackcats initially jumped ahead 1-0 in the top of the first.

Jefferson immediately answered. Ott kept his tournament bat hot and doubled in Jakoubek which evened the score. Then, Will Schnitzler drilled a double to center field that scored Dylan Schnitzler and Ott. The Blue Jays took a 3-1 lead.

Jefferson added to their lead in the second. Jakoubek hit a sacrifice fly that brought Ethan Boyer in to score. The very next at-bat, Dylan Schnitzler crushed a three-run homer that extended the lead to 7-1.

The Blackcats showed some fight when they scored two runs in the third. However, The Blue Jays had a three-run rally in both the fourth and sixth innings that sealed the 13-3 win and bumped their record to 7-6.

“We had fun while playing the game and never got down,” Richardson said.

Will and Dylan Schnitzler both led the team with four RBIs each. Will was 3-3 and Dylan was 2-3 and scored three runs. Jakoubek, Ott and Stokes all had one RBI as well. Roth scored two runs.

The Blue Jays climbed their way over the .500 mark for the first time this season. They’ll look to make it three wins in a row on Tuesday, April 20th against Herculaneum.