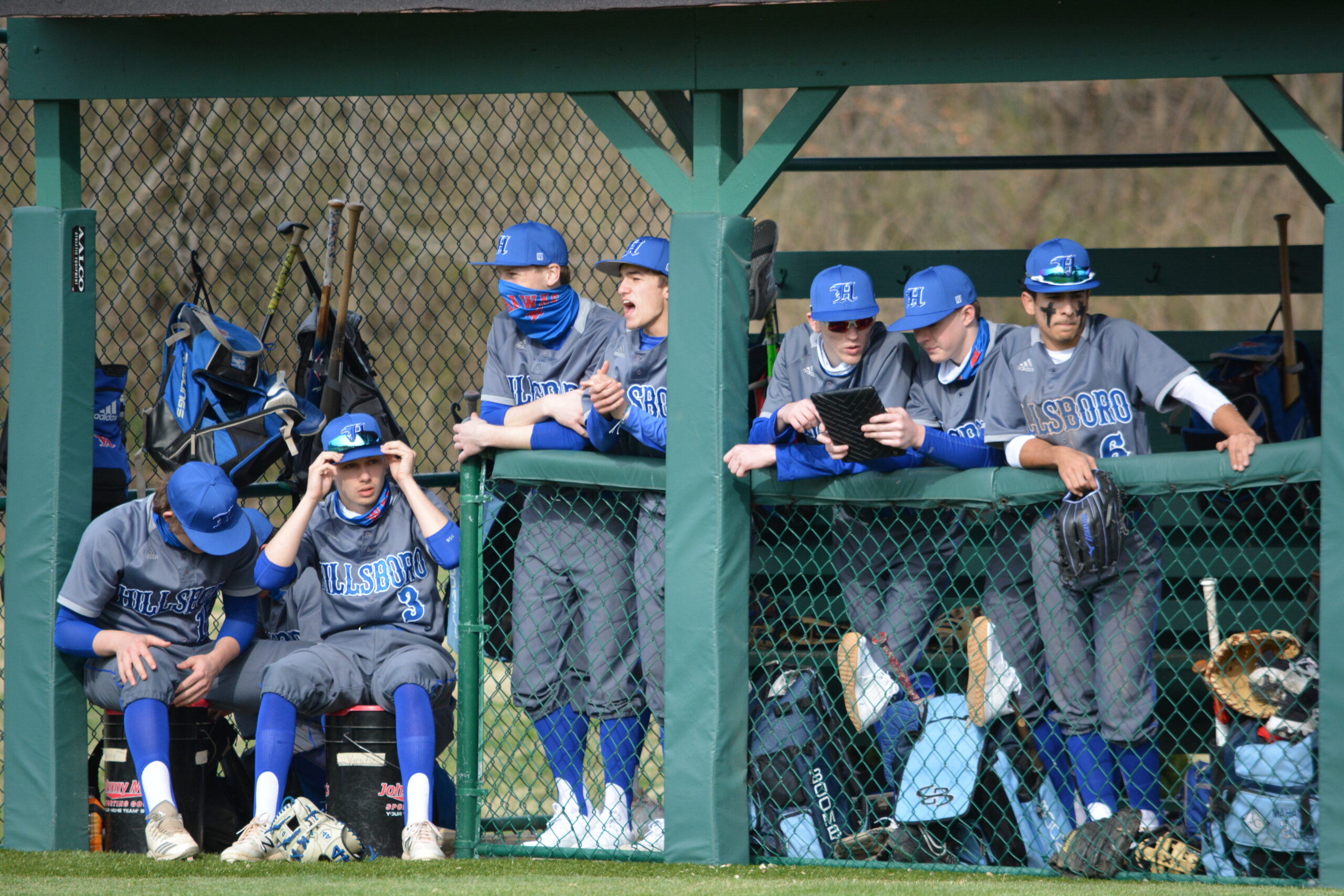 The Hillsboro Hawks Varsity Baseball team drops both games of the De Soto double-header 6-2 and 8-6 on Friday, but look to rebound against Gateway and Parkway West next week.

The Hillsboro Hawks Varsity Baseball team fell behind early and couldn’t recover in a 6-2 loss to the De Soto Dragons in the first game on Friday April 9th. The second game was much closer at 8-6, with the Hawks hanging with the Dragons right up until the end.

The bats showed up in both games for Hillsboro. They collected nine hits in the first game and eight in the second, but they couldn’t get consistent hitting with runners in scoring position. The Hawks had two runners reach in the first inning, but couldn’t convert them to runs. Zach Whaley led off with a single, but couldn’t find the plate after a Gabe King double, as he was picked off at second.

De Soto opened up the scoring in the bottom of the first, plating two runs on a two out single. As for Hillsboro, Connor Jenkins and Austin Romaine had back-to-back singles to start the second inning, but were left stranded.

The Dragons got another in the bottom of the second to make the score 3-0. They were able to keep the Hawks quiet until the fourth, when Jase Stewart and Whaley were able to cross home thanks to a parade of singles and a wild pitch. That would end the scoring from the Hillsboro side, but not the hitting. King, Romaine and Whaley would all have multiple hits this game.

A three-run fourth inning from De Soto came by way of seven singles and a fielder’s choice, and would all but seal the fate for the Hawks in this one as they fell 6-2. It’s worth mentioning however that it could have been much worse if not for a clutch play made by Stewart when he threw out a runner attempting to steal second base. Stewart also thew out another baserunner attempting to take second the next inning and De Soto did not test him again after that.

“We can’t give a good team like De Soto so many extra outs,” said Head Coach Kevin Lucas, “They really capitalized on our mistakes. We stranded too many base runners and you can’t do that against good teams.”

The second game of the double-header began with frightening similarity to the first. A leadoff walk, followed by a single and another walk left the bases loaded for De Soto. The Dragons would then go on to score after tagging up on a fly ball, but that was the only run they managed to score in the first. The Hawks went quietly in the bottom half… and then the floodgates opened.

Six more runners crossed home for the Dragons in the second inning, with four reaching base on walks and two errors before the Hawks could stop the damage. It would have been easy for Hillsboro to throw in the towel at this point, but as we have seen so much this season, they instead got to work.

Facing a 7-0 deficit in the second inning, Andrew Chaves got the rally started with a walk, and Andrew Brody moved him on to second with a single by way of a nine pitch at bat. Junior Arnold stroked a double to deep right field to score Chaves and the Hawks were on the board. Cruz Valencia drew a walk and a Whaley single down the right field line cleared the bases with the Hillsboro track and field athlete Valencia scoring all the way from first.

De Soto was retired in order in the third, and relief pitcher Eli Epley struck out the side in order in the fourth before leading off the bottom of the inning with a double to deep right field. He was moved to third on an infield groundout from Chaves and then stole home to score the sixth and final Hillsboro run of the evening. De Soto had one more left in them in the sixth inning, but were then struck out in order in the top of the seventh again by Epley.

The Hawks attempted to get a two-out rally going in the bottom of the seventh ,starting with a walk from Whaley and a single from King, but were unable to score either runner, which ended the game at 8-6.

King praised Epley’s pitching performance saying, “Our pitching both games gave us a chance to win. I thought Eli [Epley] did a really good job on the mound.” Epley pitched a total of seven innings on the evening, giving up no runs and striking out two in his two innings pitched in the first game, while only giving up one run and fanning 10 batters in the second game.

“We hit decently, but we had too many mistakes on offense,” said King, “We had runners on a lot, but couldn’t seem to bring them home when they were on. I think that if we minimize mistakes on offense and defense and get some better timely hitting, we will have a much better shot against them next time.”

Hillsboro has a home game against Gateway STEM High School on Monday April 12th at 4:30pm, and then travels to Parkway West to take on the Longhorns the next day at 4:15pm.