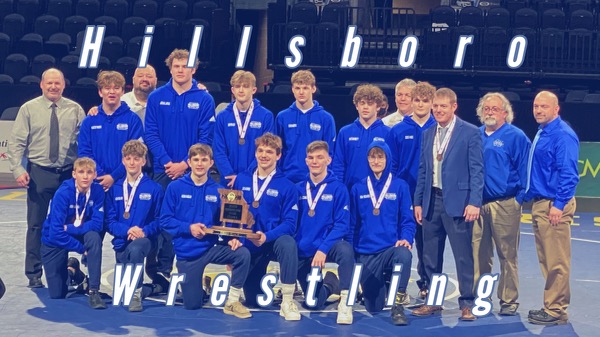 The Hillsboro Hawks Boys Wrestling team finishes third in the State Tournament for the best start in the program’s history. Black, Alexander, Richardson, Litzsinger, Ray, and McNees all finish on the podium after what was a memorable and historic season.

When wrestling practice started in late October 2020, the world was in a tumultuous existence. No one knew if there would even be a wrestling season, let alone a State Tournament in March.

However, for the Hillsboro Hawks, that turmoil never placed any doubt in their minds that they had a chance to do something special. One way or another, the team knew they were going to make an incredible run, and finish amongst the top teams in the state of Missouri. Last week, the Hawks did just that, finishing third out of 44 schools in the final tournament of the 20/21 season.

Hillsboro qualified 12 wrestlers for the final tournament and racked up an impressive 91 team points. Head Coach Matt Mitchell was pleased with the results. He said, “Overall this was a great day for the program. We definitely battled through some adversity all day as a team. It was long and tough on the kids. They responded well and gave a great effort.”

Wrestling at the 106 lb. weight class, Aidan Black finished sixth, and scored eight team points. Black lost his first match putting him into the consolation bracket. He won his next match by fall in 2:43. He won the consolation semifinals by pin in 55 seconds, but was defeated in the fifth place match, still finishing on the podium. Black said, “It felt great! I wish I could’ve done better, but I will just have to get in the room and work harder for next year.”

Mitchell commented, “Black was probably our biggest surprise of the tournament as a team. He wrestled really well and came away with a State medal. He has had a crazy year and to see him perform on the biggest day of our season was great. I’m proud of him for battling a lot of adversity this year.”

Gavin Alexander, at 113, placed fourth and earned 10 team points. Alexander won the quarterfinals by major decision 8-0. He then lost in the semifinals, pushing him to the third place match, where he again lost. Nonetheless, he finished on the podium. Alexander said, “It doesn’t feel as good as it did last year to be honest, but I’ll be back.”

On Alexander, Mitchell said, “He came up short of reaching the finals again. That was a tough weight class and he battled all day. He gets his second State medal in as many seasons. He will be back next year.”

Commenting on Haggard, Mitchell noted, “Aidan has been a big part of the program. He didn’t get what he wanted medal wise, but I think that team trophy meant a lot to him. He is one of our good ones.”

Sam Richardson, at 126, finished in fourth place and won 11 team points. Richardson won the quarterfinal match by pin in 4:57. He then lost the semifinals, and lost again in the third place match. However, he earned a spot on the podium. Richardson said, “It was cool to be on the podium, but it was not what I wanted. There’s a lot more work to do.”

Mitchell commented, “Richardson had a big win in his quarterfinals. He fell to fourth after that. I know he wanted more. This will be good motivation for him going into his Sophomore season.”

Mitchell noted, “Morris lost a heart-breaker. He had a couple of big wins too. He is really close to being very good. I’m excited to watch him get back in the room and wrestle again.”

Dalton Litzsinger, at 138, came in fourth place, and scored nine team points. Litzsinger won the quarterfinals by decision 4-0. He then lost the semifinals and third place match, but ended on the podium.

Litzsinger was content, but wanted more. He said, “It was pretty cool to stand on the podium again, doing it the second time, but I can say that it’s not where i wanted to stand. Anything can happen at the State Tournament and if there is anything I’ve learned it’s definitely that. It’s just who is willing to make it happen.”

Mitchell commented on the finish for Litzsinger, and said, “Dalton didn’t get what he wanted today. He will be back. I know he is excited for his Senior season.”

At 145, Raymund Barnett earned two team points. Barnett won the first match by decision 3-2. He then lost the quarterfinal match, moving him to the consolation bracket, where he lost his next match.

Mitchell was happy for Barnett, and said, “He had a huge win in the first round today. He wrestled great. After that he ran into some really tough kids. I think this was a great learning experience for him.”

Griffin Ray, at 152, placed third and scored 13 team points. Ray won his first match by decision 10-4. He won the quarterfinals by decision 7-1, but lost the semifinal match. Then, he won the third place match by decision 6-2 to earn a spot on the podium. Ray said, “It was awesome as always, but there is still one thing missing and that’s a title. I am proud of what I have accomplished this season, but I’m not satisfied and I won’t be satisfied until I get to stand on top of the podium.”

Thrilled with Ray’s performance, Mitchell said, “Griffin got his rematch with the Mehlville wrestler and got the win. He won when it counted. I was proud of him for fighting back and finishing third in a tough bracket.”

At 160, Eddie Hines added one team point. Hines lost the first match, moving him to the consolation bracket, and lost his next match as well. Hines said, “It just felt like any other tournament. Many people thought I wouldn’t even make it to State this year. But I’m not ok with just being a qualifier. You’ll see me at State again next year but it’s going to be a different story.”

Even though it didn’t go the way Hines had hoped, Mitchell said, “This was a learning experience for Eddie. We are excited to watch him grow from this season. I think he is primed to have a great off-season.”

Zach McNees, at 195, took fifth place and earned seven team points. McNees lost the quarterfinal match moving him to the consolation bracket. He won the next match by fall in 4:51, then he won the consolation semifinals by decision 6-2. Finally, he won the fifth place match 5-1 to land on the podium. McNees said, “It was a good feeling to finally place at State. I’m happy with my career at Hillsboro and glad my team did great as well.”

One of the workhorses for the team, Mitchell said of McNees, “I’m proud of Zach. He got that medal he has been working towards. It wasn’t easy. He beat some good kids today to get there and he wrestled hard. It was a pretty special ending for him as a Senior. It’s been fun to coach him the last four years.”

At 220, Hunter Rhodes scored one team point. Rhodes lost his first match by injury default. He then lost again by injury default in his next match. Rhodes explained, “I was wrestling very well in my first match and then my knee just got caught in a weird position, it went back in, and then it did the same thing. So I went to the trainer. They told me something bad happened and that I needed to get it checked out, but I wanted to wrestle so I got it taped up and went back out there. It didn’t end up the way I wanted, and I may have made it worse when I tried again, but I have years to come back. I’ll be back and be better than ever. Just wait.”

It was an unfortunate day for Rhodes. Mitchell commented, “Hunter got injured in the first match. He was really down about it. Up to that point he was wrestling great. Right now he will focus on getting healthy and then get back in the room. He had an outstanding Freshman campaign. We are proud of him.”

Jordan Jarvis, at 285, scored two team points. Jarvis lost his first match, moving him to the consolation rounds. He won the next match by decision 3-1, but lost the consolation semifinals. Jarvis said, “It was a great experience. I came up a little short, but I will be back next year to earn my medal.”

It wasn’t the day Jarvis had hoped for, but Mitchell was positive in his comments. He said, “This was another great learning experience for Jordan. His effort was great. He lost his last match on a technical violation which really hurt. I wish we had that match back. Jordan will learn from this and get better.”

Mitchell wrapped up the season with some encouraging words. He said, “Finishing third for the first time in program history is pretty special for these kids, their parents, Hillsboro and the community. We had nine kids in the round of eight. I wouldn’t say any of our kids were satisfied. They will get back to work soon and start getting better.”

Just qualifying for the State Tournament is an incredible accomplishment, and for these 12 young men, they have every reason to hold their heads high. For the Seniors, this is the end of the line, but for those that will return to the mats next season, this was simply a taste of the glory for which they will continue to strive.