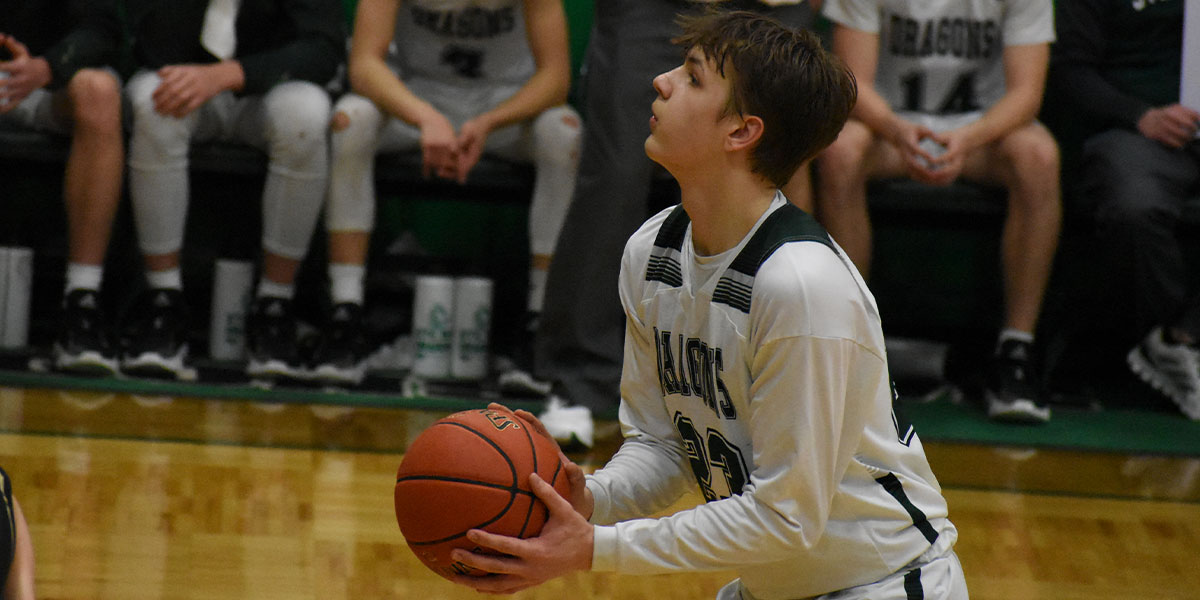 The Ste. Genevieve Dragons Boys Varsity Basketball team send the Fredericktown Blackcats home with a 72-47 win in the semi-finals of the Class Four District Two Tournament. The Dragons run up against the Park Hills Central Rebels Wednesday, March 3rd for a shot at the District Title.

The Ste. Genevieve Dragons Boys Basketball team sent the Fredericktown Blackcats packing in the semi-finals of the Class Four District Two tournament, 72-47 on Monday. The Dragons have won 13 straight matchups with Fredericktown dating back to 2013.

The Blackcats started this game deadlocked with the Dragons. Each side traded blows in the first quarter. Blake Morganthaler heated up early and hit three shots from three-point range. Aiden Boyer hit one as well that helped the Dragons to 14 points in the first. Fredericktown scored 14 as well, and the game was knotted up at the start of the second quarter.

The Dragons began to find their edge in the second. Rudy Flieg started to make his presence known in the paint and scored eight in the quarter. Ricky Hunter got on the board with his first three-pointer and Landon Rose scored his first basket as well. Ste. Gen put up 17 in the second and held Fredericktown to 12. They owned a slight 31-26 lead going into halftime.

The Dragons had another nice quarter coming off of the break. Boyer added six more points to his total, while Morganthaler hit another shot from beyond the arc and drained a field goal as well. Flieg scored four more inside and Ste. Gen. wound up with another 17 point quarter. This time, they were able to lock down the Blackcats and only allowed them to score six. The Dragons led 48-32 after three quarters.

“We played great defense,” Morganthaler said. “We are going to continue to focus on that.”

Ste. Gen. wasted no time putting this game away. They had their best offensive quarter in the fourth. Flieg continued to dominate in the paint and scored nine more points in the fourth. Ricky Hunter added five points to his total, and Boyer hit a couple of free throws along with a couple of baskets. The Dragons capped the night off with a 24-point fourth quarter and sealed up the 72-47 victory.

“We played as a team and played tough defense,” Anthony Nash said. “And that’s what we need to do Wednesday as well.”

Flieg led all scorers with 23 points. Morganthaler and Boyer followed with 16 points each. Six other Dragons contributed with at least one basket.

Ste. Gen now sits at 16-8 and has played themselves into the District Championship. They will have to go through the second-seeded Park Hills Central Rebels for a trip to the State Tournament, as well as a District Title.