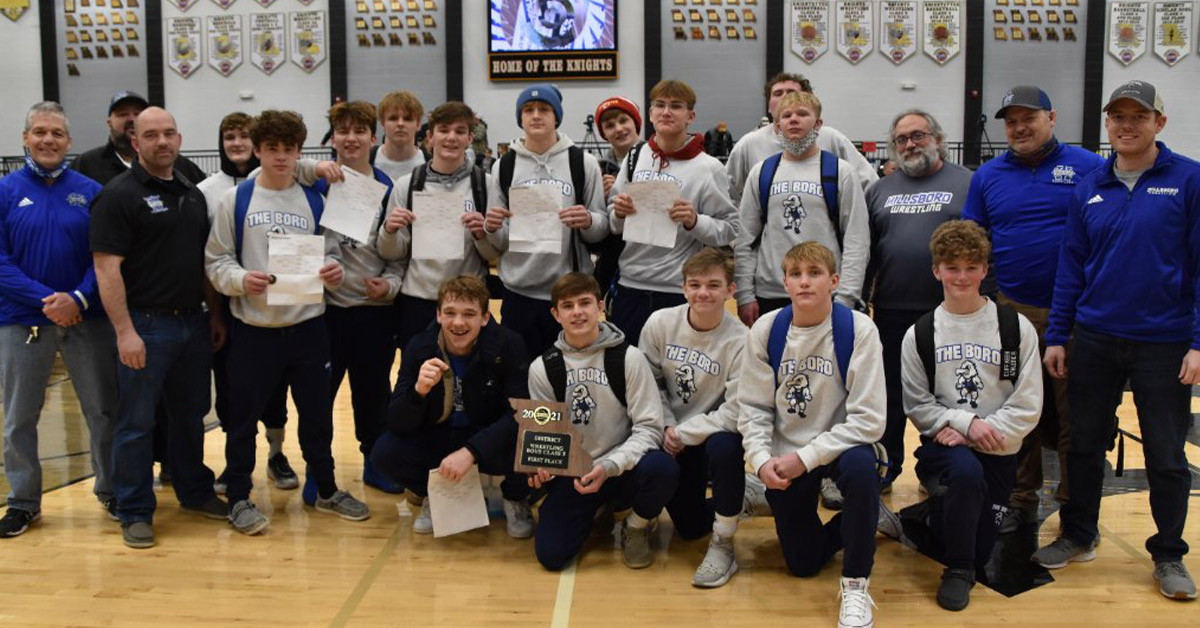 The Hillsboro Hawks Boys Varsity Wrestlers win the Class 3 District 1 Championship, the first in school history! They will send 13 qualifying young men to Sectionals after bringing home Seven Gold medals, Five Silver, and One Bronze in the District Tournament.

When the Hillsboro Hawks Boys Varsity Wrestling team began practicing in October, they had one goal in mind: Win a team State Championship, the ultimate prize in High School wrestling.

On Saturday, February 13th, the Hillsboro Hawks made their presence known by hammering the competition in the MSHSAA Class 3 District 1 Tournament. The Hawks defeated six other schools by scoring 240.5 team points to win the championship, and have taken the first step towards a team State Title. The Hawks qualified 13 wrestlers for the next round, the Sectionals, giving them a great chance to move on to the State Tournament with enough grapplers to win the big one. 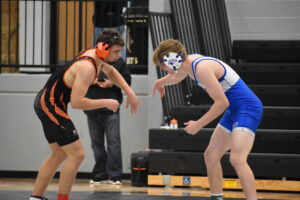 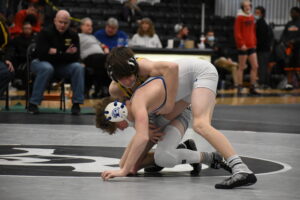 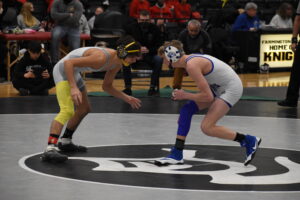 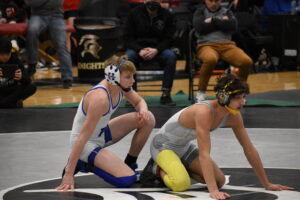 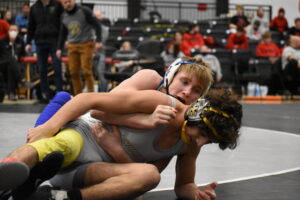 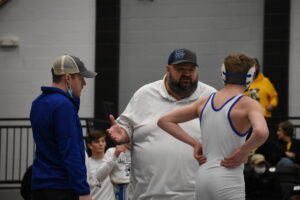 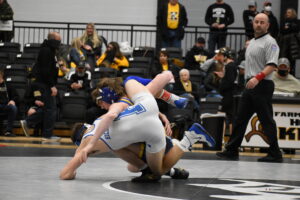 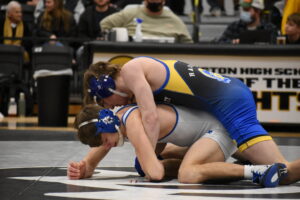 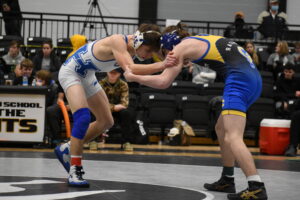 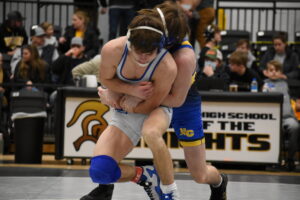 The win was a historical one as it led to the first District Championship in the school’s history. Head Coach Matt Mitchell was incredibly proud of his team, and said, “Overall, the team was prepared for Saturday. They bought into our two weeks of training leading up to it. This has been a goal for the program for a long time. I think the last couple years we have been kind of knocking at the door and this time we were able to grab that District Title. Our kids were excited about being the first group to do that in school history for the wrestling program.”

Wrestling at the 106 lb. weight class, Aidan Black placed second, and brought home 10 team points. He received byes in the quarter and semifinal rounds, lost in the finals, but will still advance to the Sectionals.

Mitchell commented on Black, and said, “Aidan had a tough Festus kid in the finals. He is looking to make some adjustments going into Sectionals. I’m excited to watch him try and qualify for State as a Freshman.”

Gavin Alexander, at 113, also placed second and earned 16 team points. He received a bye in the quarterfinals, and then won the semifinals by pin in 1:00. He then lost in the finals, but advances to Sectionals as well. Alexander said he was nervous and will have to be better if he hopes to advance out of the nest round. He said, “I didn’t handle the pressure well at all and I’m going to have to improve on things these next two weeks to dominate from here on out.”

Mitchell said, “Gavin lost in the finals to a solid wrestler from Farmington. We kind of have a little rivalry going with this kid. They have split matches now. I’m sure we will get another shot at him at Sectionals. Gavin is motivated. He will bounce back.”

At 120, Aidan Haggard won first place, and added 21 team points. He won all three matches, including a 34-second pin in the quarterfinals, a major decision 11-0 in the semifinals, and a 5-2 decision in the finals. He now advances to Sectionals.

Mitchell commented, “I’m happy for Aidan. He got a District championship as a Senior. He avenged a 13-0 loss from earlier this year against the kid he had in the finals. He executed a game plan. He is looking really good going into Sectionals.”

Freshman Sam Richardson also took home the Gold, as well as 24 team points. He pinned his first opponent in the quarterfinals in 1:07. In the semifinals, Richardson pinned the opposition in 1:53 and finished his run in the finals with a pin in 1:40. He moves on to Sectionals.

Mitchell was impressed by Richardson’s performance, and noted, “Sam had a solid day. He pinned his way through. He is exciting to watch. For a freshman to win Districts, that’s a big deal. I was happy for him. I know he wants more though. I think the next couple weeks are going to be fun with him.”

At 132, Evan Morris placed second and scored 16 team points. He received a quarterfinal bye, and then pinned his opponent in 3:32 in the semifinals. He then lost in the finals, but will still advance to Sectionals.

Mitchell commented on Morris, and added, “Evan got another rematch with the Farmington kid. I think we are closing the gap. Evan is focused right now on getting better and better each day. I think that will pay off for him soon. He is a really hard worker.”

Dalton Litzsinger, at 138, placed first and earned 21 team points. He received a bye in the quarterfinals, and then pinned his semifinal opponent, en route to winning the finals by major decision 10-0. He will compete in the Sectionals as well. Litzsinger noted, “There really wasn’t much pressure. I knew there was a job to be done and I had to go in there and get it done. Sectionals is at home and we are all very excited about that, however we still have some work to do to get to where we want to be at the end. Our team is on pace to achieve that goal, but like I said , there are many more things to do and plenty more matches to win!”

Mitchell simply added, “Dalton was our leader. He took care of business all day. He really dominated his opponents.”

At 145, Raymund Barnett brought home the Gold and 21 team points. He pinned his quarterfinal opponent in 1:34. He then won by major decision 17-4 in the semifinals, and in the finals won a narrow decision 3-2 to take first and advance to Sectionals.

Said Mitchell, “Nate was able to put together a great day. He was only seeded third going into the tournament. He was able to knock off the second seed and fourth seeds to win the championship which was pretty cool for him. He wasn’t even in the top five last year at Districts, so he has made a lot of improvement in just one year.

Griffin Ray, at 152, placed first and added 24 team points. He won by pin in 21 seconds in the quarterfinals. In the semifinals, he pinned his opponent in 3:36, and in the finals, he also pinned his opponent in 4:25 to earn his spot in Sectionals. Ray said, “I handled today just how I would any other match. I plan to watch film and keep getting better.”

Mitchell added, “Ray is another one of our leaders. He also dominated the day. I think Griffin is really focused right now. He is going to be tough to beat.”

At 160, Eddie Hines took second place, and scored 17.5 team points. He won his quarterfinal match by pin in 1:44, and won by technical fall 15-14 in the semifinals. However, he lost in the finals, but still will move on to Sectionals.

Commenting on Hines, Mitchell remarked, “Eddie found himself in a wild match in the finals. We came up short against a quality opponent from De Soto. Eddie will regroup. I know he wants to succeed. He will need two good weeks of practice to get ready for Sectionals.”

John Bennett, at 170, had a rough day losing in the semifinals and the consolation semifinals. Mitchell said, “I’m proud of John. He made great strides this season. I know he was bummed out about not making it to Sectionals. I hope he uses that loss as motivation and does some work in the offseason.”

At 182, Nicholas Green placed third and earned 10 team points. He lost in the semifinals which moved him to the consolation bracket. He won the third place match by pin in 1:46, which advanced him to Sectionals. Green said he didn’t feel nervous, and added, “There wasn’t really any pressure because I had a mind set that i was going to beat people, and will just work hard the next two weeks.”

Said Mitchell, “Nick had a solid match for third place. He has been working hard in the room.”

Zach McNees, at 195, earned a first place finish and 22 team points. He won the semifinals by fall in 54 seconds. He also won the finals by pin in 4:53, to take home the Gold and move on to Sectionals.

“I’m really happy for Zach. He has always been a hard worker. For him to get that District championship, I know that meant a lot to him. He isn’t done yet though. I’m excited to watch him finish off his Senior year,” said Mitchell.

At 220, Hunter Rhodes placed first and added 22 team points. He pinned his opponent in 2:49 in the quarterfinals. In the semifinals, he added another pin victory. In the finals, Rhodes won a decision 2-1 after using the ultimate tie breaker rule. Rhodes said, “My teammates and coaches help me a lot with the pressure aspect. They have a lot of confidence in me and help me. To prepare for Sectionals I will just continue to improve in the practice room every day.”

Mitchell talked about Rhodes, and said “Hunter had a gutsy performance in the finals. He was able to win with a ride out essentially. He has been working hard since being back from quarantine. He also got some Freshman nerves out. I was proud of him. He competed very well with everyone.”

Lastly, Jordan Jarvis, at 285, earned the silver medal as well as 16 team points. He won by pin in the semifinals in 3:07. However, he lost in the finals by decision, but will go on to Sectionals.

Mitchell commented, “I know Jordan was disappointed with his second place finish. He really wrestled well enough in the finals to win and just fell short. I hope we get the chance to wrestle that kid again. I think we will be able to get that takedown the next time around.” 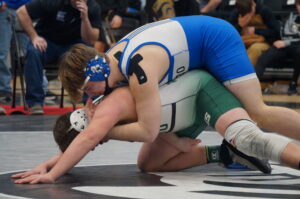 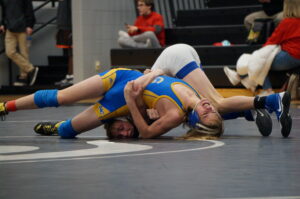 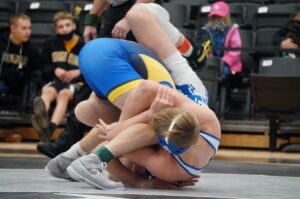 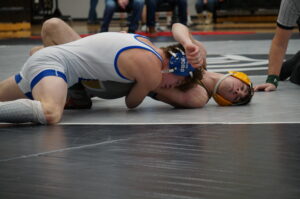 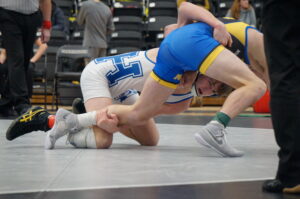 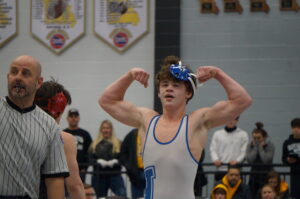 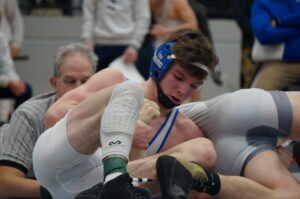 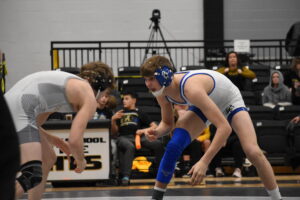 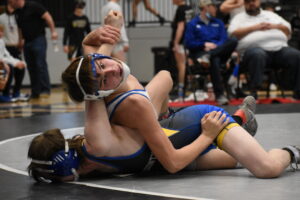 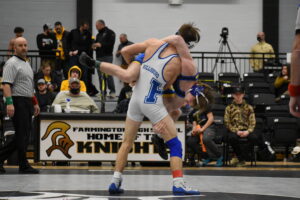 With the team win, the Hawks have advanced 13 wrestlers to the Sectional round, which will determine who will move on the State Tournament. If any team is poised to make a championship run, the odds are strongly in the favor of Hillsboro.

Sectionals will take place in two weeks, on Saturday, February 27th, at Hillsboro. Mitchell said, “Now, we look ahead. This group still has more to do. They are motivated for more. The program has high expectations and now we look to get back to our training phase again and get ready for Sectionals.”

Until then, the Hawks will continue to sharpen their talons and make any final adjustments before strapping up the head gear yet again. 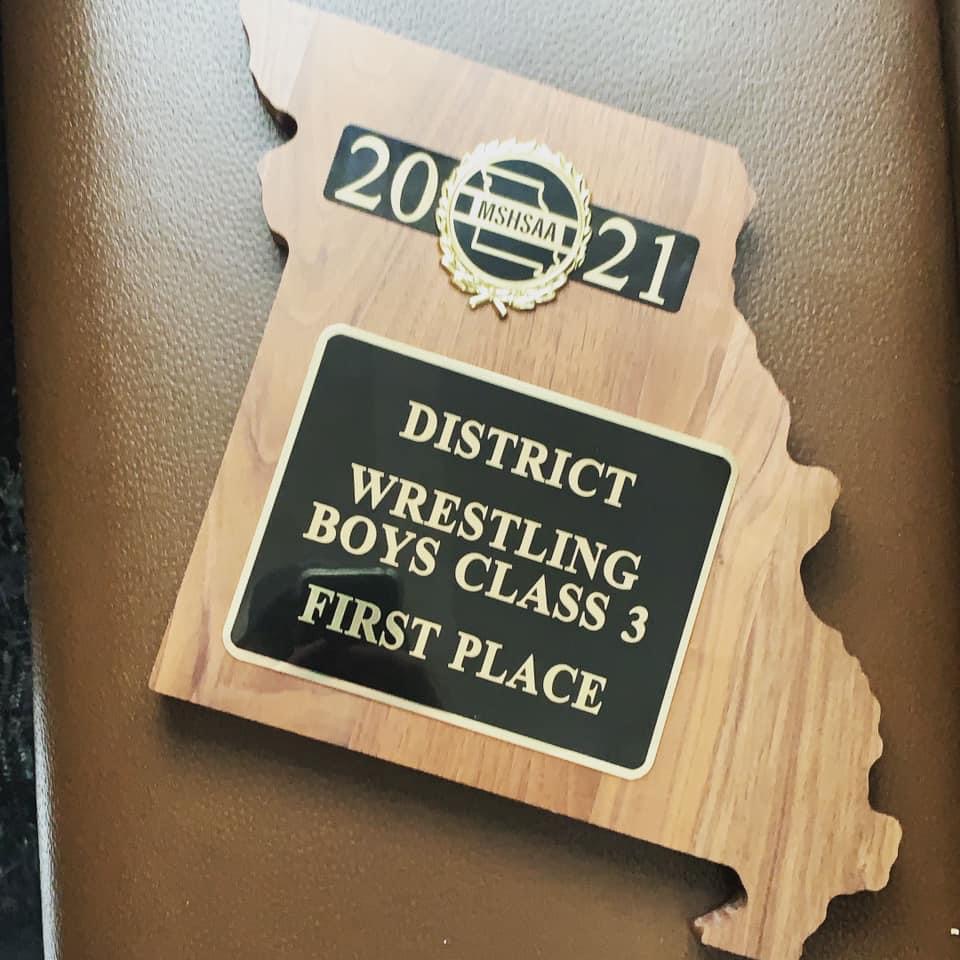 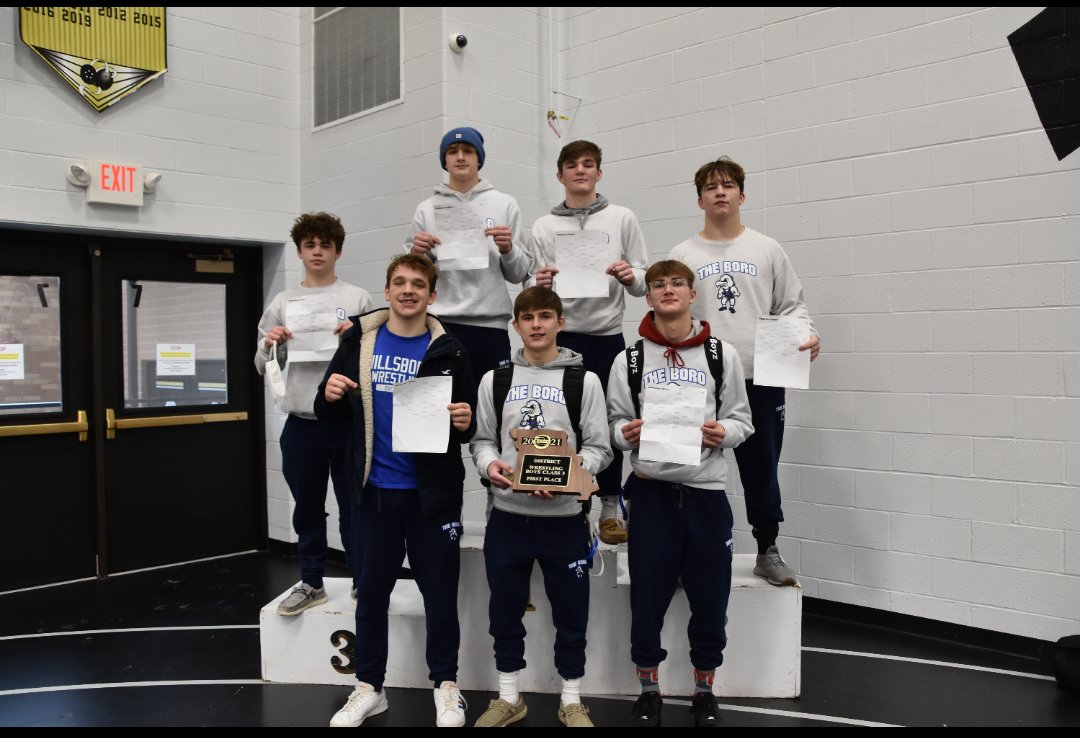