These Lady Blue Jay Seventh Graders of Jefferson are ready to shine, as they tackle tough matchups and whatever the world has to throw at them, under the tutelage of Head Coach Tara Fish.

Commitment.  That is one word that could be used to describe this year’s Jefferson R-7 Seventh Grade Blue Jays Basketball team, run by Head Coach Tara Fish and her volunteer assistant (and husband) Aaron Fish.  If there is a practice or open gym held, they are there. When practice is finished, they complain because it went by too fast… and they don’t want it to be over. On top of that, most of these girls are involved in club volleyball at the same time. They appear to be a corral of workhorses, if you will.

The results: lots of skills, court sense and fun basketball.

“The best part is watching them continue to grow and have fun while doing it,” noted an exuberant Tara Fish.

To say that this year’s 7th Grade Girls team has really been something to watch would be an understatement. Six out of their eight games, The Lady Jays defense held their opponents to 11 points or less. In four of those six games, they held teams to four points or less. I know what you’re thinking, but you read that right, f-o-u-r points or less, and that folks… is unbelievable!

On top of that, this is with all the girls playing all games (unless they were out due to illness).  Every single player on the Lady Jays brings something to the table to create a crazy mix of dominating defense and unstoppable offense.

The aggressiveness and speed are brought to the court by Louise Duepner, Peyton Guffey, Natalie Haug, Ella Hueter and Halayna Loyd. Then you’ve got Brooke Blankenship, Ella Fogelbach, Ryleigh Johnson, Nancy King and Annabelle Richardson backing them up with toughness and height under the basket. It’s starting to feel like we’re describing the bad boy Detroit Pistons from the late 80’s… parents will get the reference. 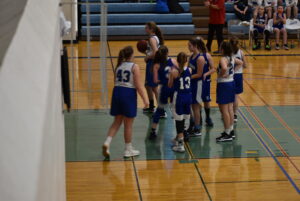 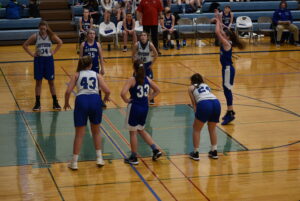 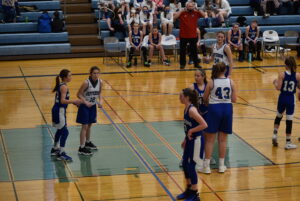 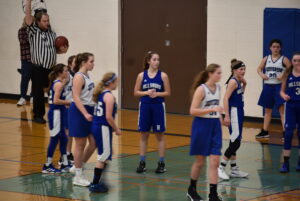 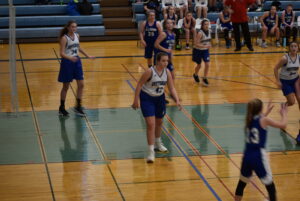 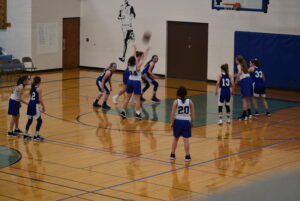 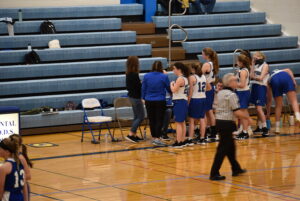 Monday night brought the biggest challenge these young ladies have faced yet, as they welcomed an excellent Hillsboro team. For the Jays though, it was no different than any other team they faced.

“Fogelbach is a calm kid but as the game went on, we watched her start to feel confident enough to fight for a jump ball, which excites us all,” noted Coach Fish. We saw Duepner get into foul trouble early, but with Guffey, Haug and Hueter they all took turns wearing down their guards.

At one point Blankenship took her toughness into the paint making way for Johnson to drive in for an easy layup.

Richardson and King took their height advantage to work, utilizing hard box outs and earning the Jays rebounds. King was also able to dribble the ball up for the press break, which is an unusual task for her, but did it with confidence.

Loyd, who’s a skilled player with a ton of court sense, impressed everyone in attendance with not only her skills, but also her mental toughness. At the end of the game, during a crucial moment, she got called for a travel.

Loyd, who was playing in what might have been the biggest game of her basketball career, could have taken the mistake one of two ways. She could have completely shut down or taken the support from her teammates and coaches. Coach Fish called a quick timeout, to assure Loyd and the team that other players had made mistakes too, but that she needed to shake it off and get after it.

The pep talk from Coach Fish worked, as Loyd responded with a huge play resulting in a steal for the Blue Jays, leading them to victory over Hillsboro in a 33-32 nail-biter.

If this group continues along this path with their dedication and excellent family support, they will find TONS of success in the future. And you are not going to want to miss it!