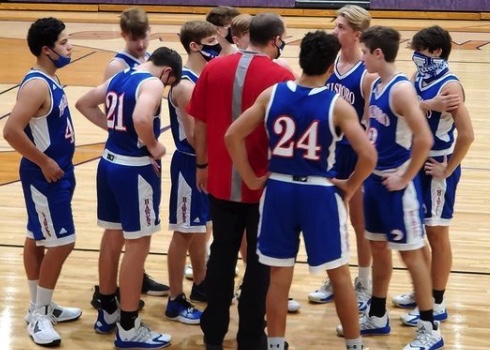 It was a dominant first quarter from the Hawks as Chase Sucharski, Dominic Sutton and Payton Brown got the offense firing on all cylinders. The Hawks defense was arguably more dominant against the Lancers only allowing seven points. The were off to another great start leading 22-7 after 8:00 minutes of play. Its offense stayed hot in the second with the defense shutting down almost everything St. Pius threw at them. Gavin Hite led the second as the Hawks held a 16-8 advantage to lead 38-15 at the break. Payton Brown led with nine points at halftime, while Chase Sucharski added eight.

Coming out of halftime, Hillsboro decided it was time for a Pool Party, as Luka Pool added nine points and the final nail in the Lancers coffin. The fourth brought much of the same for both teams, the Hawks scored at will and shut down anything the Lancers tossed in their general direction, and the Hawks were able to cruise onto the 43-point win.

“Jumping out to a big lead helped put the pressure on the opposing team,” said Sucharski. “When things like full court press are successful, it allows us to comfortably run the offense and play aggressive defense. Getting everyone rotating in and out of the game also helps with experience for the entire team and gives us all confidence into each game.”

Luka Pool led the floor with a game-high 16 points. Sucharski ended with 12 points, while Gavin Hite (11), Brown (11), and Dominic Sutton (10), each finished in double-figures.

It was another offensive explosion in the first quarter for the Hawks with Payton Brown leading the way. Brown pulled up twice beyond the arc, sinking both attempts along with any hopes Potosi envisioned getting a win. In what has become a normality at this point, the defense shut down the Trojans offense leading 17-2 going into the second.

The Trojans decided to go with a different approach in the second quarter and utilize their own brand of shutdown defense, but that ultimately sent Hillsboro to the charity stripe which wasn’t the best idea. Dominic Sutton took the reigns, leading the Hawks with seven in the second quarter, as Hillsboro went into half on top 35-7 over Potosi.

The third quarter was the most highly contested of the game with the Hawks outscoring Potosi 6-5. Its strong offensive and defensive efforts on both ends of the floor carried Hillsboro as they went on for the 28-point victory.

Sutton led with a game-high 12 points. Payton Brown was the final player in double-figures with 11. Both Jack Prince and AJ Heuszel contributed seven points each.

The team returns to action on January 15th against Festus. Tip-off at 4:30 p.m.

***If these boys keep it up we might need to throw them an actual pool party at the end of the season!