The Ste. Genevieve Dragons handed the South Iron Panthers their third loss of the season 66-55 on Monday. The Panthers have had trouble with the Dragons in the past. They are 1-4 against Ste. Gen dating back to 2016.

The Ste. Genevieve Dragons put a stop to the South Iron Panthers win streak on Monday. The Dragons have been a thorn in the Panthers’ side the past few seasons. They are 1-4 against Ste. Gen dating back to 2016.

“Tonight was one of those games that allowed us to see where we are at as a team,” Head Coach Lawrence Graves said. “Ste. Gen is one of the most talented and veteran teams in our area and we knew we would have to play really well to have a chance to win.” 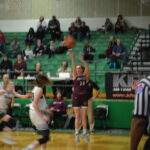 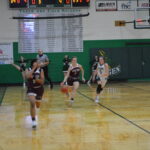 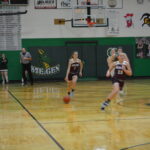 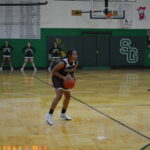 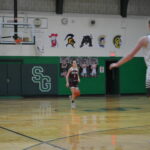 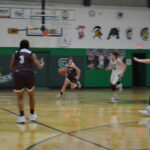 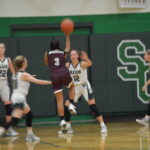 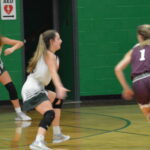 “Ste. Gen did a great job of getting transition shots and speeding us up throughout the game,” Megan Lashley said. “I think that we could have done a better job of reducing the amount of transition layups they got. I thought our defense was good and our effort was there.”

South Iron came out in the second half and topped both of their first two quarters with 14 points. However, Ste. Gen’s transition game continued to give the Panthers problems and they kept the pressure on. They scored 19 in the third and extended their lead to 18. The Panthers outscored the Dragons 18-11 in the fourth but ultimately came up short. They lost 66-55 and were handed their third loss of the season.

“We are really pleased with what we saw,” Graves said. “Our girls showed up to compete and really laid it all on the line for each other the entire game. We obviously had our share of mistakes, but that’s what good teams have the ability to make you do.”

The duo of Allecia Cornell and Madison Ayers took on most of the offensive workload. Cornell scored 19, grabbed four rebounds and had three steals. She also hit three shots from beyond the arc. Ayers had 18 points, seven assists, three rebounds and six steals. Enzley Dinkins had eight points and three rebounds. Lashley scored six points and shot a perfect 3-3 from the floor. Their record now sits at 9-3.

“We played hard from start to finish,” Dinkins said. “We could have made more of our layups and free-throws that we missed.”

South Iron is not discouraged. The effort and defensive energy were there for them throughout the night.

“The biggest takeaway was all of the positives we saw,” Graves said. “Our girls worked really hard to help each other find great shots all night long.  If we can bring effort, intensity and focus like we had tonight to each game we play, we feel like we will always be in a position to find success.”

The Panthers’ next opportunity for success comes against the Twin Rivers Royals. That game is Saturday, Jan. 16.