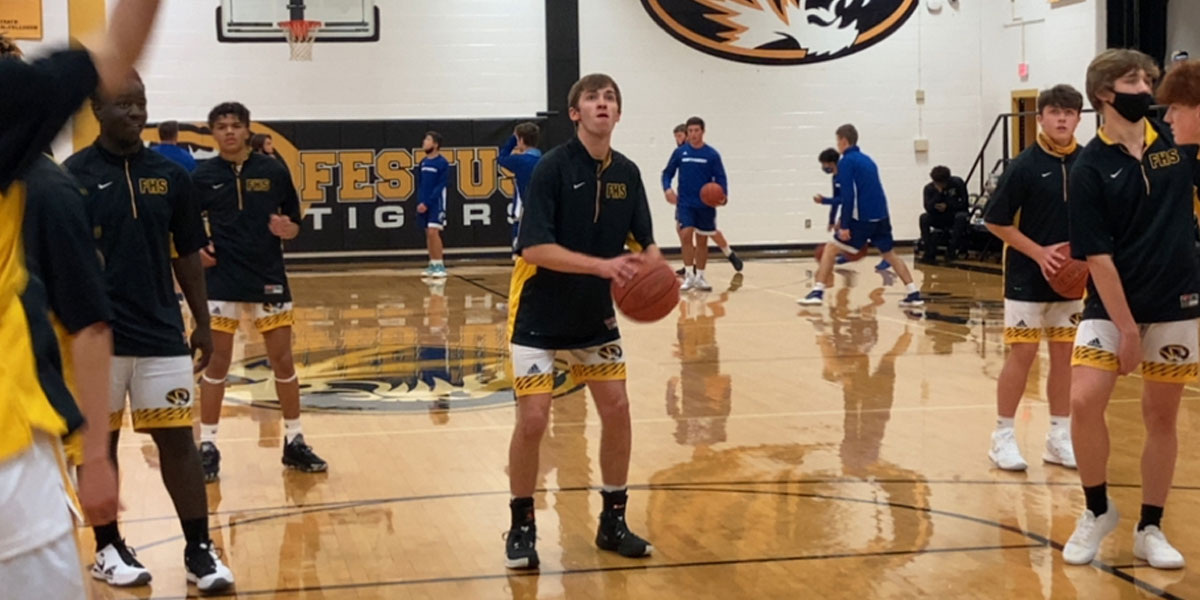 The De Soto Dragons avenged their loss in the Christmas tournament to the Festus Tigers on Tuesday night. Festus is 2-2 in their last four matchups with De Soto.

The De Soto Dragons avenged their loss to the Festus Tigers in the Park Hills Christmas Tournament with a 57-52 win over the Tigers on Tuesday. The Tigers are 2-2 in their last four matchups with the Dragons.

The win Festus had over De Soto in the Christmas tournament capped an impressive showing for the Tigers. This was their first game since the tournament, and De Soto came to play. Festus had trouble matching their energy early.

“We came out very slow and just couldn’t work our offense out,” Collin Reando said. “Our defense was very slow and we were just not working hard enough on either end. De Soto came out strong and pushed us around, so I give them props for that.”

De Soto came out firing. They scored 19 points in the first and were able to hold the Tigers to just nine. Festus woke up and began to settle in at the start of the second. Cole Rickermann hit two shots from beyond the arc, and Arhmad Branch scored five points of his own. They cut into the Dragons lead and outscored them 15-11 in the second. However, Festus still trailed 30-23 at the half.

The Dragons adapted to the adjustments the Tigers made in the second and took back control of the game. Collin Weinhaus got on the board for Festus in the third with six points, but Festus continued to fall further behind. De Soto led 47-34 at the start of the fourth. The Tigers did not go away quietly. JD McDowell came alive and scored nine points in the fourth. Branch did his best to help out with five points of his own. Festus outscored them 18-10 in the quarter but ultimately came up short. The Dragons won 57-52 and handed the Tigers their fourth loss of the season.

“We got off to a really tough start and were never able to find a rhythm on offense,” Head Coach Jason Therrell said. “We ended up tying the game late before coming up short by five.”

Branch and McDowell led the team in scoring with 13 points each. Rickermann was just behind with 11 of his own. Weinhaus scored eight, Reando had five and Kaian Roberts-Day had a basket as well.

Branch was disappointed in the game’s outcome. He said nothing really changed in De Soto’s game plan. It was more of an issue with the Tigers’ execution.

“We had an off night,” He said. “Nothing was going down but that’s not an excuse. They played well.”

So far, the season series is even at one win for both sides. They see each other again at the end of January and both sides will be anxious for a victory.

“They were fired up and ended up outworking us overall,” Reando said. “We will be fine and hope to change the outcome when we play them later in the season.

The Tigers now sit at 8 and 4. They won seven of their last nine games and hope to continue to carry some of that momentum. Their next test comes against the Seckman Jaguars. Festus lost to the Jaguars earlier this season. The Tigers will plot their revenge and take on Seckman Friday, Jan. 8.