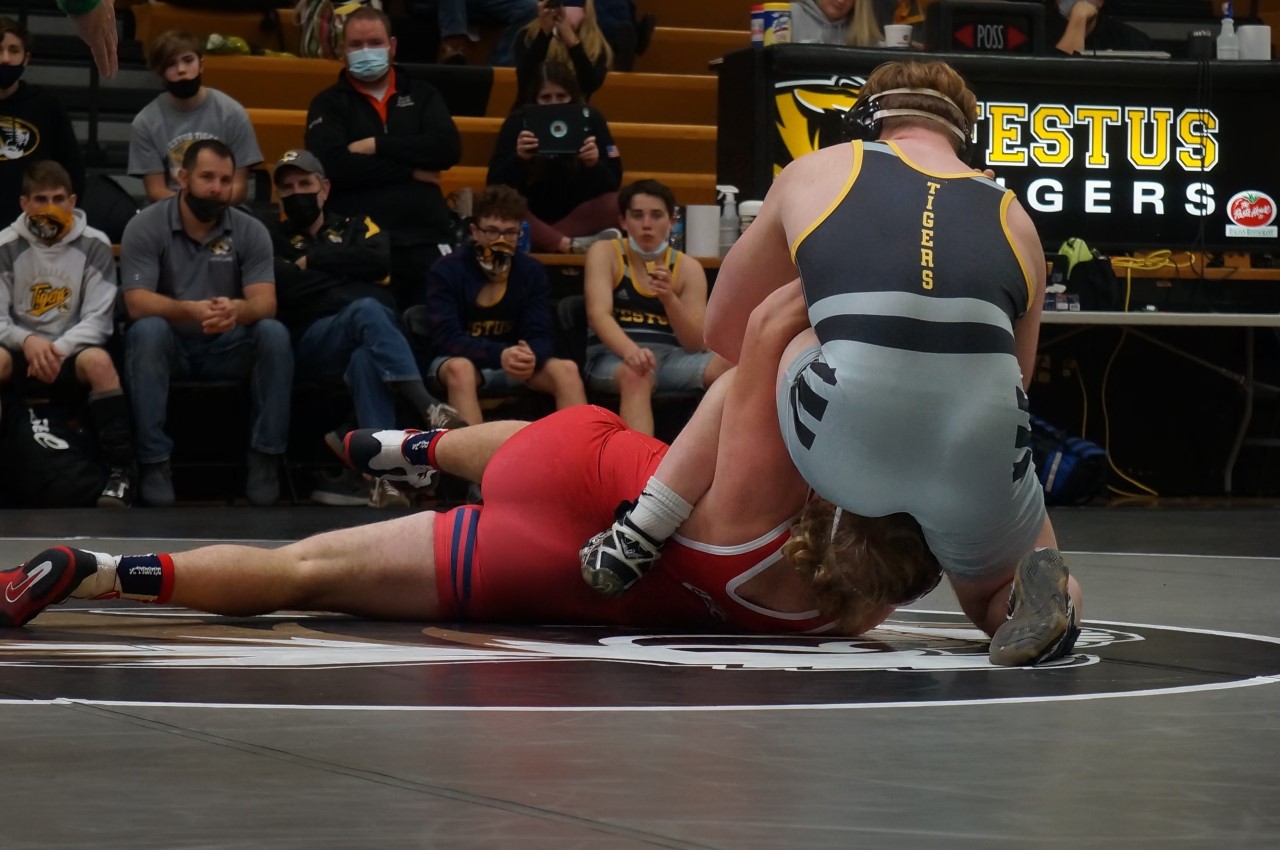 Tough competition for the Festus Tigers Boys Varsity Wrestling team leads to a 1-1 outcome against Oakville and Valle in a triad meet. Standouts on the mats, Austin Neff, Luke Shaver and Jordan Banks as each earn two pins in the meet.

The Festus Tigers Boys Varsity Wrestling squad entered a triad dual meet on Wednesday, December 16, against the Tigers from Oakville and the Warriors from Valle Catholic. The team went 1-1, defeating Valle Catholic 58-18, and losing to Oakville 45-27. Head Coach Jason Nahlik commented, “It is always disappointing when we lose a dual, like we did against Oakville, but when you consider we are a young team, and they are a class four school, we did pretty well. I was very happy with our performance against Valle as well.”

The result against Valle came on the strength of five pin victories from the 10 contested weight classes. At the 126 lb. weight class, Neal Kausler started the dual off with a major decision win 12-0. At 160, Robert Buehre pinned his opponent in 31 seconds. At 182, Jordan Banks also pinned his opponent in 1:33. Luke Shaver, wrestling at 195, took 1:48 to pin his opponent. Shaver knows what he needs to do to improve, and said, “I need to focus on my single leg takedowns.”

Connor Holt, wrestling at 285, earned a pin at 5:30. Holt commented on his evening and said, “Both athletes were good opponents for me, as each had different styles of wrestling that made me adapt. I improve every time I’m on the mats, regardless of the outcome. I will continue to work hard in practice, listen to my coaches, and stay mentally and physically prepared.”

Wrestling down a weight class at 106, Austin Neff defeated his opponent by pin in 2:49 to finish the dual against Valle.

Starting off the next dual against Oakville, Neff came out on top again with another pin victory, at 2:26. At 182, Banks earned a second pin, taking only 28 seconds to do so. Shaver, wrestling up a weight class and giving up about 30 lbs., defeated a very tough opponent by decision 8-5.

Nahlik sees what his team needs to do to improve, and said, “We have a lot of small adjustments we need to make moving forward, and we will do so in the practice room. One way we will accomplish this is by differentiating our practices based on our wrestlers’ needs.”

Festus will strive to keep the intensity high in the practice room as they will have the holiday week off from competition, and be back in action on December 30 in the Hillsboro Tournament.