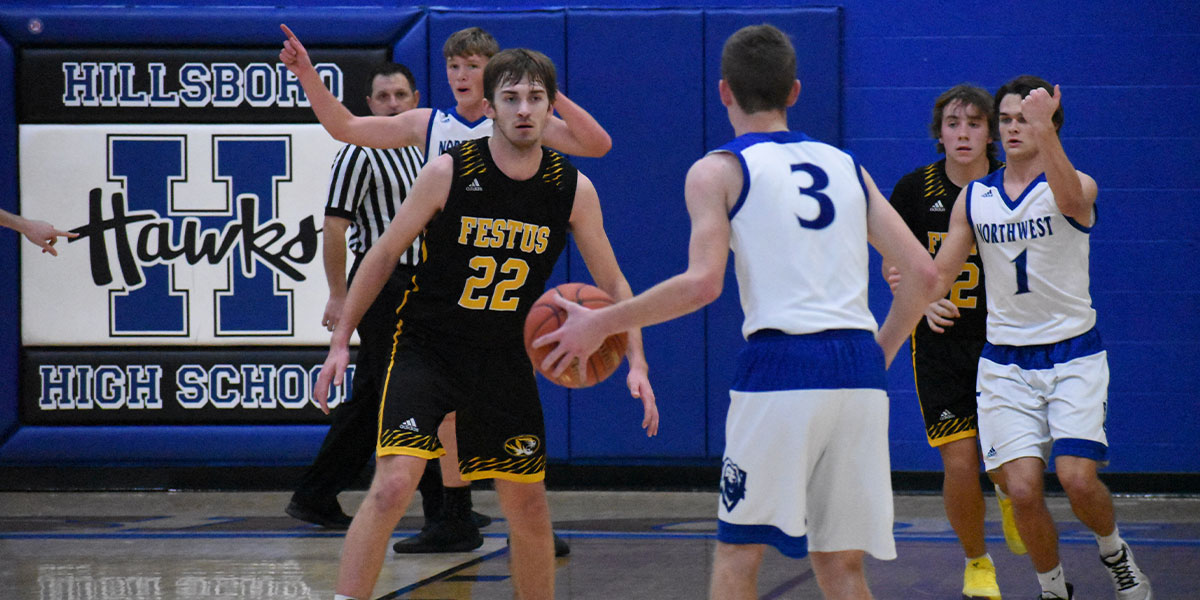 The Festus Tigers Boys Varsity Basketball squad powers past the Northwest Lions 50-37 on Wednesday. The win pushes the Tigers’ record to 2-2 and sets the stage for a battle with Windsor on Saturday in their final game of the Steighorst Tournament.

The Festus Tigers Boys Varsity Basketball team won their second game of the season Wednesday night as they trounced the Northwest Lions 50-37 in their first game of the Gene Steighorst Tournament.

The Tigers took control of the game from the beginning and never looked back. Collin Reando started his night with four points in the first quarter. Connor Westhoff then hit a shot from beyond the arc to help the Tigers to an early 11 to 5 lead. They extended their lead in the second quarter as Reando scored four more points and Desmond Davis etched his name in the score column with five points of his own. They outscored Northwest 16 to 10 in the second, taking a 27-15 lead into halftime.

JD McDowell started hot in the second half for the Tigers. He scored six in the third quarter, while Cole Rickermann also had a bucket and hit two shots from the line for good measure. Festus outscored the Lions yet again in the third 16-12, giving them a 43-27 lead at the start of the fourth. The Lions were finally able to outscore the Tigers in the final quarter, 10-7, but it didn’t matter. Festus’ lead was too much to overcome, and the Tigers won 50-37,  improving their record to an even 2-2 on the season.

The offensive production was spread throughout Festus’ roster. Eight different Tigers saw the ball go through the net.

“I think us playing together as a team helped us get the win tonight,” Collin Weinhaus said.

Playing as a cohesive unit, helped the Tigers improve on the defensive side of the ball as well.

“We fixed our press and we played together,” Arhmad Branch said. “We were sloppy towards the end but we still pulled it off.”

Reando led the team with 13 points, while Rickermann and Davis each scored nine. Rickermann was 5-of-7 from the free-throw line, as McDowell was just behind in total points with eight of his own.

Festus will look to improve on its 2-2 record over the weekend as the Tigers play the Windsor Owls on Saturday, Dec. 12 in an attempt to move their record above .500.