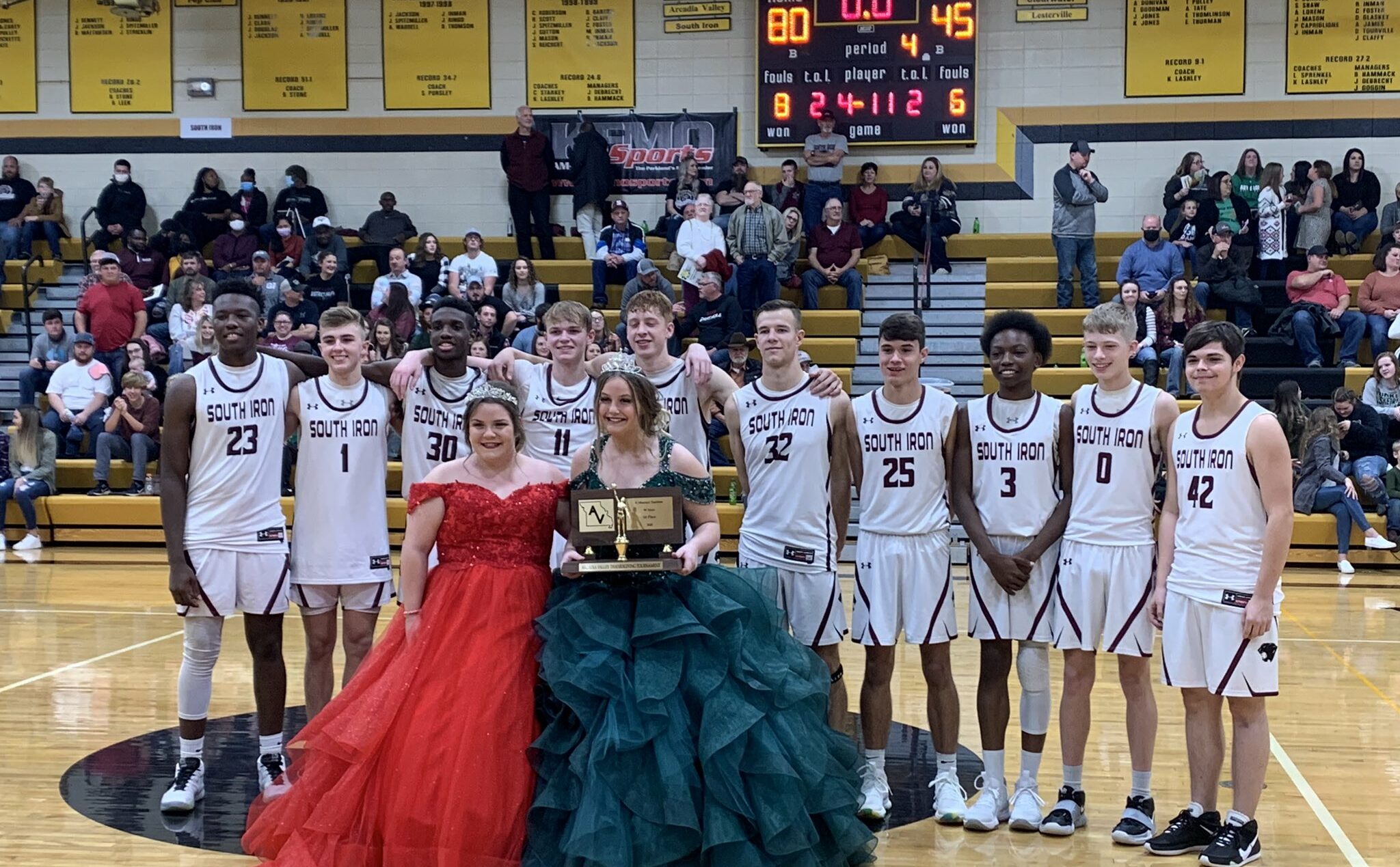 The South Iron Panthers take home the Arcadia Valley Thanksgiving Tournament with an 80-45 victory over Bunker. The win makes South Iron 11-1 in their last four appearances in this tournament.

The South Iron Panthers Boys Varsity Basketball team took down the Arcadia Valley Thanksgiving Tournament for the third straight season with an 80-45 win over Bunker on Thursday.

The Panthers are 11-1 in their last four appearances in this tournament and this is the third year in a row they have won it. They are starting to get used to eating their Thanksgiving feast fresh off of a tournament victory.

“It feels great to start the year off on a championship,” Lucas Lunyou said. “I think we have had great chemistry with each other throughout the first three games.”

Last year’s matchup between these two teams also went South Iron’s way. The Panthers won 88-44. They kept their game consistent throughout the tournament this time as well. For the third game in a row, they jumped out to a big first-half lead. They outscored Bunker 26-8 in the first quarter and 21-13 in the second.

That made the score 47-21 headed into the second half. They then outscored Bunker again in the third 26-12. Bunker did win the fourth quarter, but it was inconsequential. South Iron’s lead was too much to overcome, awarding them the game, 80-45, and the tournament.

Brock Wakefield had 31 points to lead the team, and added eight rebounds and five assists. Drenin Dinkins had 22 points, six rebounds and four assists. DJ Prater was the only other Panther in double figures. He had 14 points, four rebounds and seven steals.

“We are very excited to be able to have our entire team healthy and intact for the entire tournament,” head coach Dusty Dinkins said. “We have a talented team who can put pressure on our opponents through their defense as well as their offensive abilities. We will continue to focus our attention on working together to embrace the challenges this season presents us.”

The Panthers have fit seamlessly together on the floor this season. They haven’t missed a beat, even in a year that has been taken over by unforeseen circumstances.

“In all three games we got off to really great starts,” Drenin Dinkins said. “Our press was a huge contributor to those fast starts with getting steals and converting on the opportunities where the offense had moves.”

The Panther defense has been especially dominant so far.

“We’ve put a lot of defensive pressure on teams the last three games and it has led to easy points on the offensive end,” Wakefield said. “We also have a lot of guys who are very skilled offensively.”

The tournament championship win brought the Panthers’ record to a perfect 3-0 on the season. They have a little time off to rest up and bask in their recent victory, as South Iron’s next test will be a rematch from its second game of the season against Ellington. That game takes place at Ellington on Tuesday, Dec. 8 at 8 pm.