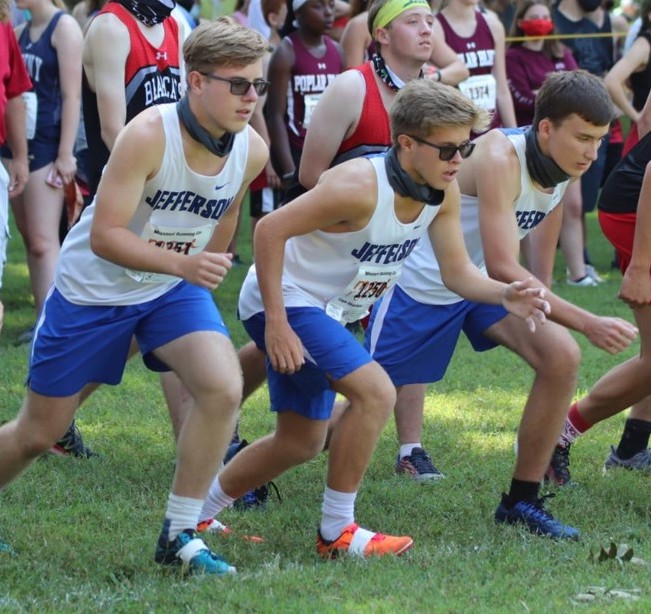 The Jefferson Blue Jays boys varsity cross country team knows expectations will be higher this year. Last year, the team almost exclusively ran at the JV level. This year, it’s varsity competition for a team that’s been running together for a while.

There’s no doubt that cross country is an individual sport.  It’s just a runner running against himself…trying to eclipse his own goals and standards he has set personally.  But cross country can be an amazing team sport when runners are able to run as a team, using strategy and methods to make the team more important than the individual.  In 2020, the Jefferson boys varsity cross country team can finally run as a true varsity team.

“This team has been running together for several years now,” head coach Mollie Rhodes pointed out.  “With several of our boys now being seniors, we are ready to see what they can do as a team.  Many of them have put in the work over the summer and are ready to compete.”

Let’s begin with two young men who have already experienced varsity competition and have fared just fine.  Jeremiah Chipps and CJ Johnson competed at the state meet in Columbia last season.  “Jeremiah was 10th at district, and CJ was 12th,” Rhodes remembered.  “Both boys ran personal bests at that meet.  They ran well at the state meet considering it was their first time there.” 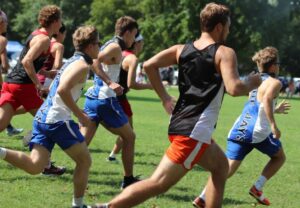 Both runners have goals to return this season, but they’d like to bring some friends along.  Bradley Glass, Matthew Glass, Christian Stark, and Jack Hueter each return to the team this fall.  “I expect this team to continue to work hard,” Rhodes said.  “Their goal is to try to take a team to state this year before we lose several key senior runners.  This is going to be a huge challenge for them, as they have not come close to placing in the top two yet at districts, but it’s not an impossible challenge.”

According to Rhodes, it will take a full team effort to accomplish this goal.  “We need several boys to break the 20-minute barrier this season to accomplish the goal of taking a boys team to state.  Jeremiah and CJ are going to have to continue to run even faster, as they are our only state runners in the past several years for the boys team.  They are really going to have to help out their team by finishing with as low a score as possible.  Bradley Glass is also going to have a big role to play this year.  He is the only other boy to run under 20 minutes for a 5K, and we are really going to need him to make a push to get into the top 15 at the district meet.  This is going to be a big year for the boys team.  There is so much potential on this team, and I cannot wait to see them race throughout the season.”

The season got underway on Saturday at the Jackson Invitational, and the team did not disappoint.  “We had three boys medal today,” Rhodes pointed out.  This is one of the best performances we have had at Jackson for the boys in several years.”

Johnson led the way, placing 11th in the sophomore race.  Johnson ran a 14:50.41 and said it was nice to compete.  “It felt good to get back and running,” he said.  “I felt like I did pretty good at the race, and I hope I can improve at Forest Park (the next race).  Chipps ran a 14:48.32 on the 2.35 mile course.  That was good for fifth place in the junior class race.  “It was really exciting to get back into racing again,” Chipps noted.  “Having our track season cut off because of Covid made me even more 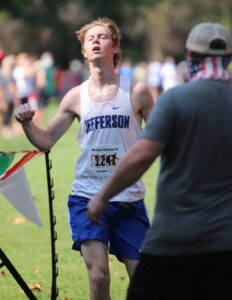 anxious because we have been out so long.  I felt strong and calm during the whole race, and coming out with a fifth place finish felt pretty good to me.  Overall, the whole team did fairly well.  What surprised me more than anything though, was Christian stepping up this year and grabbing a real fast time in the senior race.”

“Our boys put in a lot of miles over the summer to prepare for the season, and they are making a great deal of progress at practice,” Coach Rhodes noted.  “We have talked a great deal about how they need to treat every race as if it is their last this year, and they did exceptionally well for the first race of the season.”

Coach Rhodes also wanted to give a shout out to the team’s lone freshman, Alex Breeze.  In his first high school race, running by himself, he finished 37th out of 60 runners with a time of 14:45.32 on a 1.95 mile course.

“This group of boys has been great about pushing each other, and we believe that they have a great season ahead of them,” Rhodes stated.  “It was a great day to be a Blue Jay!”

The boys will be back in action next Saturday, September 12 at the Forest Park Invitational.  This is always one of the largest and most competitive meets of the season. For meet details, which have changed a bit this year, go to the event website at https://fpxc.com/.