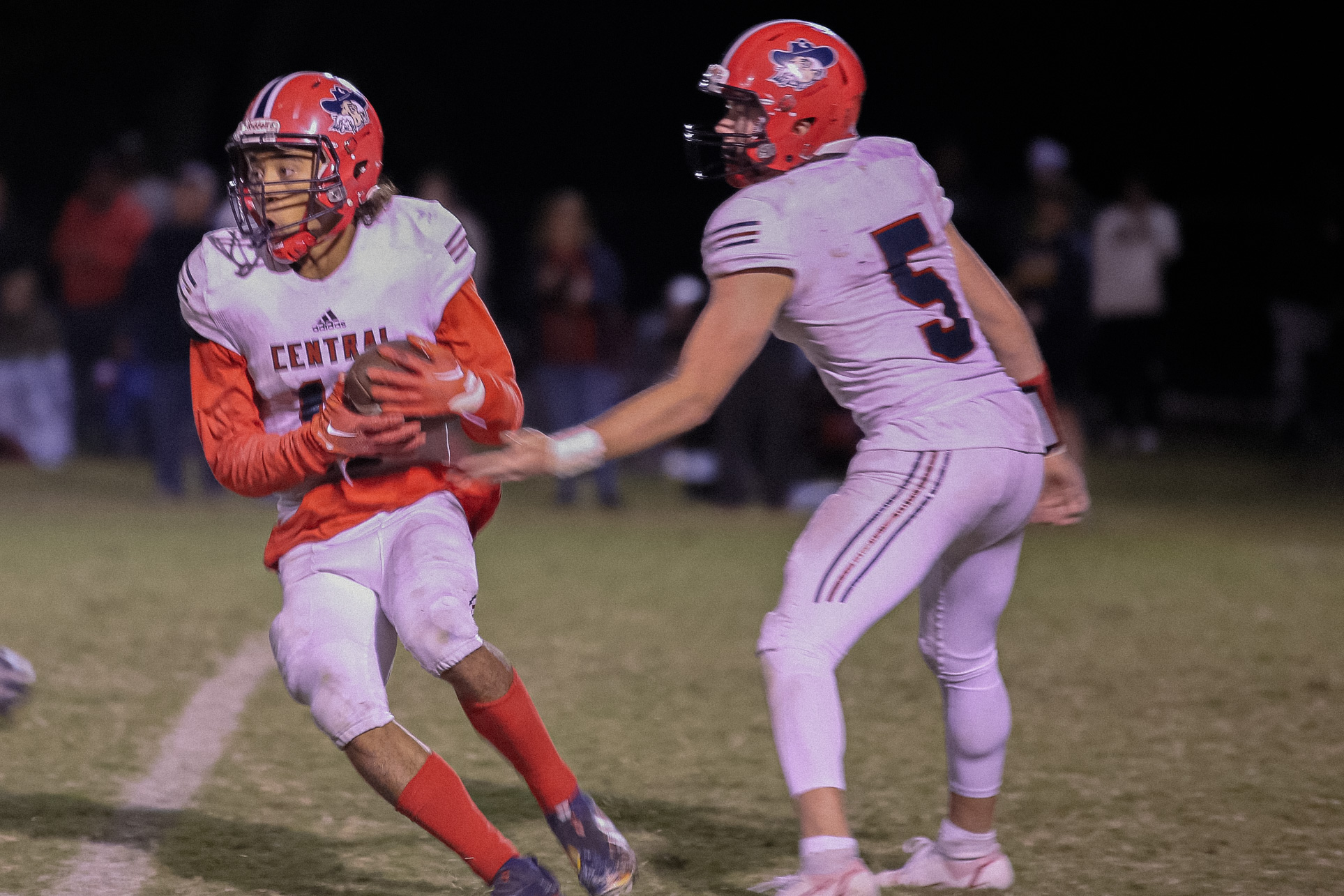 Central Avenges Only Loss to Capture District Title at Valle

For the third straight season since being placed in Class 3 after years of dominance in Class 1, Valle Catholic completed a perfect regular season only to see its season end in district competition.

On the other hand, the Rebels earned their second consecutive District 1 Championship and avenged a 40-30 loss at Valle in week six of the regular season.

If that 30-21 final score in favor of Central seems familiar, that is the exact score of the Rebels lead over the Warriors with nine minutes left in the fourth quarter of the regular season meeting. In that match-up, Valle scored three unanswered touchdowns to close the game and earn the victory.

But in the District Title showdown, Central made sure history would not repeat itself with stifling defensive pressure on Warriors’ quarterback Chase Fallert down the stretch. They assured there would not be a furious comeback this time around.

On a cold, blustery night in Ste. Genevieve, these two tremendous teams made their fair share of special plays. But there were plenty of mistakes as well. There were 14 penalties and six turnovers combined, with Valle committing five of the giveaways.

The uncharacteristic miscues started on the opening kickoff when Valle’s kick returner Rylan Fallert fumbled and Central recovered to take over at the Warriors 28 yard line. But a holding penalty, a personal foul and a sack forced the Rebels to punt on fourth and 35 from their own 47.

A short punt set Valle up at its own 41. On the second play, C. Fallert outran the defense down the right sideline for a 58-yard touchdown. Will Kuehn added the extra point for a 7-0 lead with 9:15 to go in the first quarter.

It appeared the Warriors were about to take control of the game when they recovered a fumble by Central’s Kannon Harlow at their own 40. But the Rebels’ defense stepped up to force a three and out to get the ball back to the offense.

After a Rebel punt, Valle running back Bryce Giesler fumbled to give the ball back to Central at the Warrior 30. This time the Rebels took advantage of the miscue as quarterback Casen Murphy tossed a six-yard touchdown pass to Jobe Bryant on the second play of the second quarter to tie the game 7-7. That was Bryant’s 11th touchdown reception on the season and his 27th overall.

But in typical fashion the Warriors answered right back with a 25-yard scoring run by Giesler to go back in front 14-7 after Kuehn’s PAT at the 9:41 mark. That was Giesler’s 20th rushing touchdown on the season.

Then it was Central’s turn to find the end zone again. Murphy found Bryant for a second time, this connection was from 15 yards out on a third and goal. The PAT tied the game at 14 with 7:30 left in the first half.

The final points of the half were set up after Murphy picked off fellow signal caller Fallert at the Rebels 26.

Bryant got things rolling with a 43-yard run to set up a 37-yard field goal by Mason Williams that just snuck over the goal post. The Rebels took the 17-14 lead into the locker room at halftime. They scored ten points off two of the four Valle Catholic turnovers in the opening two quarters.

Judd Naeger’s defenders came out to start the third quarter as if they were determined to grab the school’s first Class 3 District crown. A sack on Central’s first offensive play pushed the ball back to the Rebels’ five-yard line, which forced a three and out.

Sam Drury returned the ensuing punt all the way back to the Central two-yard line. Fallert ran in the next play for his second touchdown to put his team back in front 21-17 with 10:55 remaining in the third quarter. Fallert finished the season with 11 rushing touchdowns.

Then the game turned thanks to the Rebels’ special teams.

After another Central punt, the Warriors moved the ball down the field and lined up for a long field goal from Isaac Basler. The kick was blocked and returned more than 80 yards for a touchdown by Bryant, one of the most electrifying players in the region. Valle blocked the extra point to keep the score 23-21 with 4:33 left in the third quarter. His third touchdown of the game was Bryant’s 29th trip to the end zone on the season.

Late in the same quarter, the Rebels appeared to tack on another score when Murphy found Harlow on a 75-yard catch and run. But the huge play was called back by a penalty, something that hampered Kory Schweiss’ squad throughout most of the game.

Undaunted, Central worked its way down the field again and this time Murphy punched in a decisive score from a yard out. The all-important extra point made the score 30-21 with 6:59 left.

Valle’s best chance at getting back in the game ended on downs at midfield with 4:54 on the clock.

The Warriors’ got the ball back one more time at their own 20 with 2:36 remaining but they ran out of time as Harlow picked off Fallert’s pass into the end zone on the game’s final play.

Finally, a chance for the Rebels’ coaches, players and fans to exhale and celebrate another District Title under Schweiss.

On a field full of elite players, the junior Murphy stood out with two touchdown passes, a rushing score to seal the victory and two interceptions on defense. He had 154 yards passing and 40 on the ground. Bryant, another junior, wasn’t bad either with 85 yards rushing on just ten carries, two TD catches, a pass completion and the return of a blocked field goal to turn the tide in the second half. Sophomore Jaxon Jones and the Junior Harlow combined for 90 receiving yards. Central finished with 296 total yards thanks to a balanced attack with 137 rushing and 159 passing yards.

The Senior quarterback Fallert led the Valle ground attack with 96 yards on 16 attempts with a pair of touchdowns. He was 11-21 for 124 yards in the passing department with three interceptions. Giesler closed out a brilliant career with 85 yards for the game and 1,166 on the season. He averaged more than a first down each time he touched the ball at 11.7 yards per carry. The Warriors had 225 rushing and 124 passing for a total of 349 yards.

Carson Tucker concluded an impactful Senior season for the Warriors with 13 total tackles against the Rebels and a team-high 88 for the season. Another Senior, Tim Okenfuss, had one of the team’s five sacks and two tackles for loss to lead the team in both categories at 12.5 sacks and 36 stops behind the line of scrimmage.

Central will put its 11-1 record on the line in the State Quarterfinals at home against top ranked and undefeated Cardinal Ritter. The Lions crushed University City in their District 2 title game 54-8. The game is scheduled for Saturday, November 19 at 1 p.m.

Central Avenges Only Loss to Capture District Title at Valle