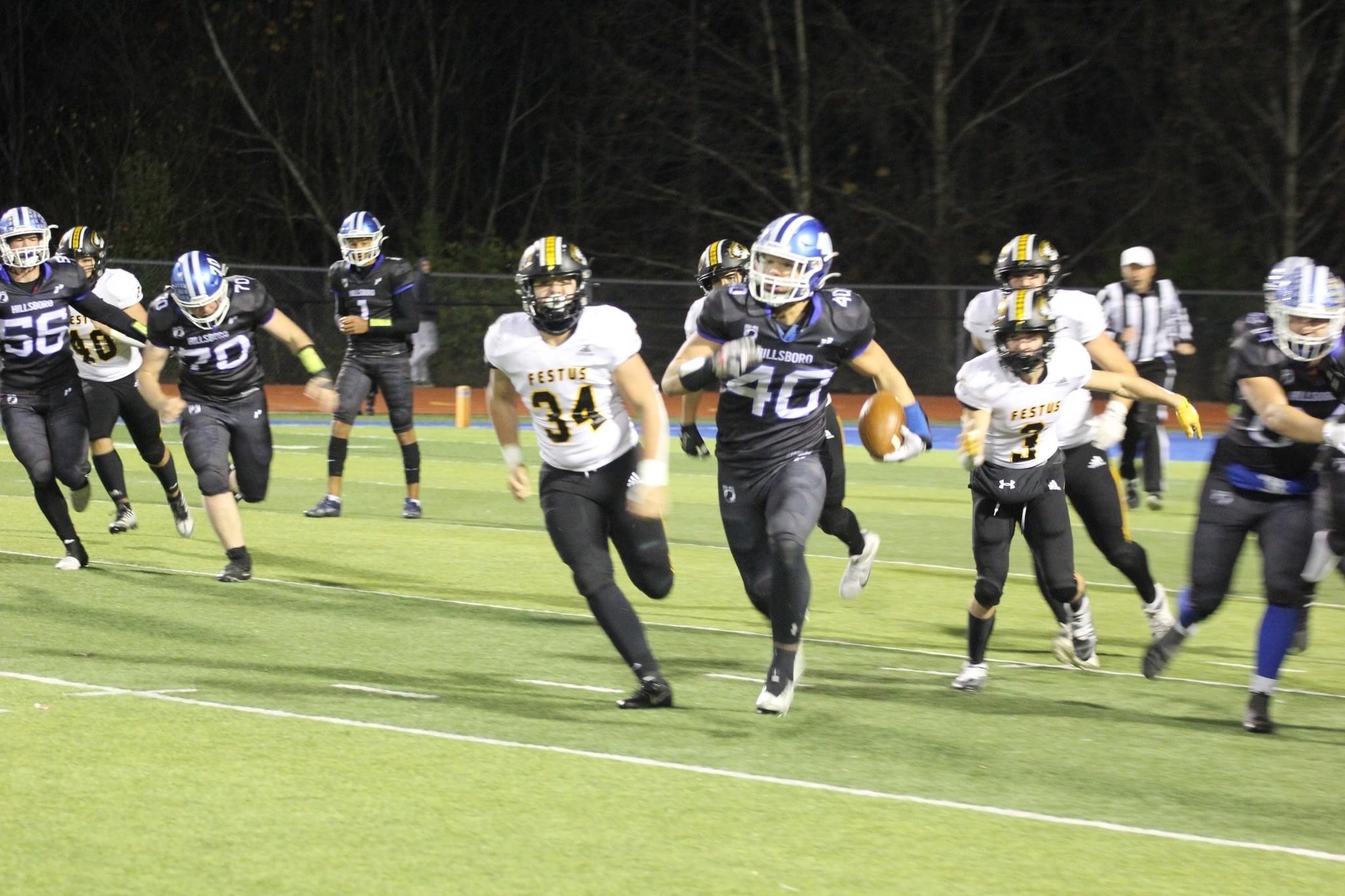 The Hillsboro Hawks take down the rival Festus Tigers to claim their first District Championship in five years.

The Hillsboro Hawks used a massive six-TD performance by Austin Romaine to extend their season on Friday night while simultaneously eliminating their crosstown rivals in the process. The Hawks pounded the ball on the ground and the defense held a dangerous Festus Tigers offense to just six points in the District Championship game. Hillsboro won 55-6 and will move on to the State Quarterfinals next Saturday against St. Mary’s.

The Hawks used a stout offensive line to open holes for their punishing rushing attack all night long. Head Coach Bill Sucharski commented on the effort, saying, “the O-line came through with another game allowing our backs to have a huge night. Really proud of our kids and coaches.”

The scoring opened up in the first quarter with Romaine doing his thing, as he rushed one 22 yards to the house for a quick 7-0 lead. It would be a recurring theme on the night. Then just over three minutes later on their next possession, Jaxin Patterson found pay dirt from four yards out to double the lead.

The Hawks weren’t done scoring in the first yet though. Romaine found the end zone again on Hillsboro’s next drive and scampered in from 39 yards out for his second score. Festus did manage to answer back after that one as QB Jeremiah Cunningham score on a nine-yard quarterback keeper to cut the lead to 21-6 after the first 12 minutes of play.

The second quarter was all Romaine. He found the endzone for the third and fourth times with TD runs of seven and one yard, respectively. That made the score 35-6 as the two rival squads headed to the locker room.

Hillsboro didn’t take their foot off the gas in the second half either. It was Romaine again as the stud tailback broke one off for 78 yards about halfway through the quarter. Then in a surprising turn of events, the Hawks took to the air as QB Preston Brown found (no surprise here), who else but Romaine. He snagged a 28-yard dart and streaked into the endzone to extend the lead to 49-6, giving him six total TDs on the day.

In the fourth quarter Payton Brown got in on the scoring with a two-yard TD run and that capped all of the offense for the day. The Hillsboro defense didn’t bend the rest of the way and they held on 55-6 to end their bitter rivals’ season and capture their first District Title since 2017.

The Hawks out-gained the Tigers 465-188 and racked up 396 yards on the ground. They won the turnover battle 2-0 as Chase Sucharski and Canyon Stout each had key interceptions, and the pass rush was able to penetrate the Tiger defensive front. The Hawks racked up five sacks and had Cunningham and Essien Smith on their heels all night.

Romaine had the game of his life with 179 yards and five rushing TDs, caught his only target for a 28-yard score and also led the team in total tackles with 9.5. Two and a half of those went for a loss and he also registered a sack in the complete effort.

Patterson eclipsed the century mark on the ground as well, totaling 123 yards on just 10 carries. Preston Brown completed 3-of-5 passes for 69 yards and a score and chipped in with 77 yards rushing. Defensively, the entire team was suffocating, but Alex Medina was an absolute beast. He managed 7.5 tackles, with 3.5 going for a loss, and registered 2.5 sacks.

This was a complete effort for the Hawks, and a disappointing outcome for the Tigers. Festus ends a very successful season at 6-6, while Hillsboro now has some new District hardware and is off to the State Quarterfinals with their 10-1 record in tow.

They will travel to take on St. Mary’s on Saturday November, 19th at 1pm to see if they can extend their season by at least one more game.