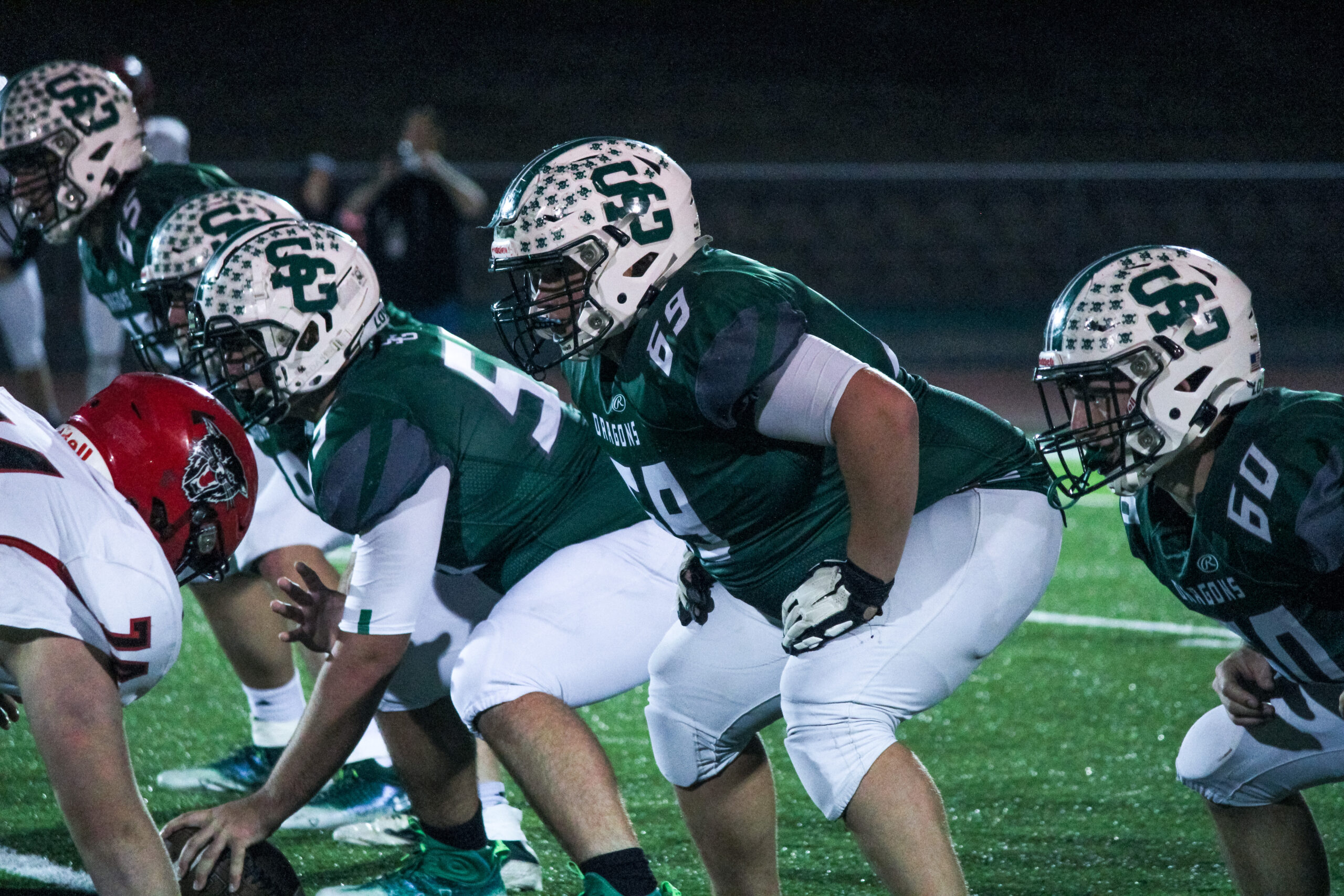 The Ste. Genevieve Dragons pound the Dexter Bobcats 56-17 and advance to the District Semifinals.

The Ste. Genevieve Dragons are moving on to the District Semifinals after Friday’s dominant 56-17 victory over the Dexter Bobcats. The Dragons used a combination of rushing and arial attacks to put up a 42-point first half that set the stage for their first Playoff victory of the season. They have now won three in a row and move on in Districts to take on the rival Central Rebels.

The first quarter was relatively quiet in this one. The visiting Bobcats got on the board first with a 38-yard field goal, but Ste. Gen answered right back with QB Aiden Boyer hooking up with his favorite target Wyatt Springkamper for a 43-yard bomb into the endzone and a 6-3 lead. That got the ball rolling, heading into the most exciting frame of the day.

Dexter struck first once again, with a one-yard TD run to retake the lead at 10-6, but the Dragons blew the doors off after that. Boyer, on a quarterback keeper, rushed the ball 59 yards to the house to give Ste. Gen a lead they would not relinquish. It was all Dragon fire after that, as Boyer found Springkamper again, this time from 22 yards out, and then first-string Running Back Ayden Butcher took over from there.

The grinding tailback had rushing scores of two and 59 yards on back-to-back possessions to give the home team a 35-10 lead, and pump up the crown in Ste. Genevieve. The cherry on top of the first half, was Boyer and Springkamper connecting for the third and final time with a 53-yard catch and run into the endzone. That sent the Dragons into the locker room with a 42-10 advantage.

The first half was so dominant that Ste. Gen could afford to rely on the reserves, so Sophomore Running Back Jack Farlow stepped in for Butcher, and stepped up in a big way. The only scoring in the third quarter belonged to him as he ripped off touchdown runs of 57 and 37 yards, respectively, to blow the game completely open at 56-10.

The Bobcats managed a meaningless TD in the fourth quarter, but the writing was on the wall well before that. The game ended at 56-17 and the Dragons celebrated their advancement to the District Semifinals.

It was the usual culprits doing all the damage once again in this one. Boyer led the charge with 187 yards and three TDs against just one interception, and also ran for 66 yards and a score to give him four total on the day. Springkamper caught just three passes, but each one did tremendous damage, totaling 118 yards and all going for touchdowns.

Butcher owned the ground game in the first half with 82 yards and two scores on just seven carries, but gave way to Farlow who lead the team with 122 and two TDs of his own. Jacob Johns led a smothering Dragons defense with 12 total tackles and a fumble recovery, while as a team they allowed just 298 yards and forced two turnovers.

Now with that one in the books, Ste. Gen will have to focus up as they will face a very formidable and very familiar foe. Next week they will travel to Park Hills to take on the Central Rebels in the second round of the playoffs. The two teams matched up in Week 5 and the Rebels dominated that one 45-3, so the Dragons are going to want to adjust their game script accordingly if they’re going to hang with the number two seed in the District.

It should be an exciting offensive affair.