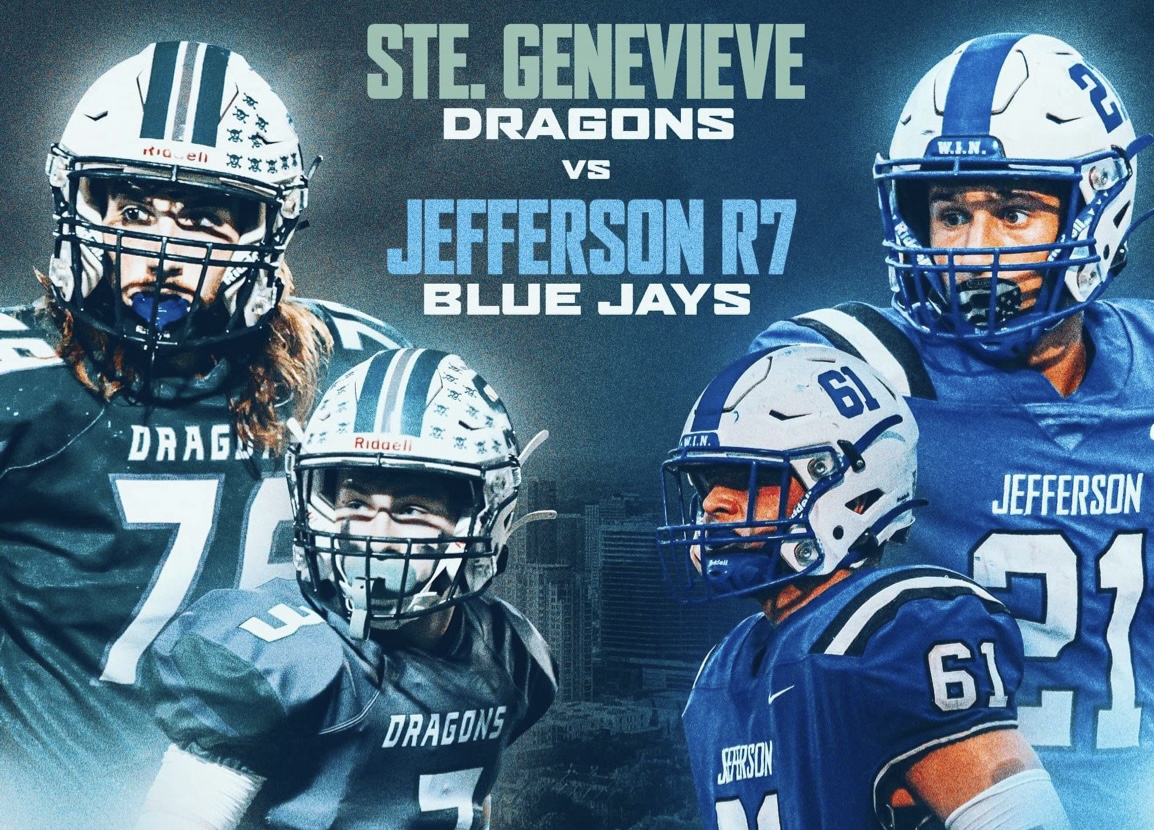 Ste. Gen Comes Out on Top in Shootout with Jefferson

The Ste. Genevieve Dragons and Jefferson Blue Jays go back and forth in an offensive battle, but the Dragons prevail 41-34.

Despite the loss, Jefferson likely had its best offensive performance of the season, considering the opponent, as the Dragons are known for their high flying offense.

A week after piling up a season-high 441 yards in a lopsided win over a struggling Grandview squad, the Blue Jays put up 387 total yards against Ste. Gen, who improved to 6-2 on the season. And those Dragons needed a big win after dropping their last two games to two extremely tough opponents in Valle Catholic and Park Hills Central.

The first quarter of this game didn’t necessarily provide a preview of the fireworks to come in the final three quarters.

The only score of the opening 12 minutes came when Jefferson quarterback Kole Williams connected with Sam Stokes on a 54-yard touchdown pass. The extra point failed and the score was 6-0 heading into the second quarter.

This was just the opening act for a second period in which five touchdowns would be put on the board.

It started when Ste. Gen found the end zone on a 13-yard scoring pass from stud QB Aiden Boyer, who connected with Tucker Reed. The PAT put the Dragons ahead 7-6.

Undaunted, the Blue Jays roared back on the legs of Stokes, who ran it in from 56 yards out. The two-point conversion failed and the score was 12-7.

Then, in a quarter of whatever you can do I can do better, the Dragons regained the lead on a two-yard touchdown run from Jack Farlow. The two-point attempt failed to keep the score 13-12.

After that, R7 star running back Sean Usery took matters into his own hands, or should I say legs, when he scampered to the end zone from 65 yards away. The successful two-point try put Jefferson up 20-13.

Cue the back and forth.

Ste. Gen would get the equalizer before halftime on a 51-yard scoring strike where Boyer hooked up with a streaking Wyatt Springkamper. The extra point sent us to halftime all knotted up at 20-20.

It was going to be tough for the third quarter to live up to the fast-paced, big play excitement of the second frame, but while it may not have been as electrifying, it was quite compelling, and kept the suspense building for an exciting finish.

The Dragons broke the halftime deadlock with a 24-yard touchdown pass where Boyer and Springkamper got together again, as the duo was making some serious noise in R7 territory. The extra point put Ste. Gen ahead 27-20…for the moment.

Jefferson answered back with Usery up to his old tricks. He found the end zone for a second time on a 22-yard run. The kick tied the game again at 27-27 after three quarters.

Did I mention the back-and-forth nature of this game?

Sticking to the script, that sentiment just set the stage for the Dragons to regain the lead for good in the fourth quarter on a five-yard run from Boyer who decided to keep it for himself to reach pay dirt. The PAT made it 34-27.

Ste. Gen then grabbed the only two-score lead of the night on 34-yard TD run by Farlow to go up 41-27 and put the game out of reach.

The Blue Jays didn’t go away quietly though. Williams tossed his second touchdown pass of the game, this time to Nate Breeze from 37 yards out to pull back within seven at 41-34.

But the Dragons held on from there to earn the hard-fought road victory and possibly some renewed confidence after getting blown out in the two of the past three weeks by Central and Valle. Not to mention they put up 41 points against a defense that came into the game allowing less than 12 ppg. They also won the third down battle, converting at 56% (5-of-9) compared to just 14% (1-of-7) for the Blue Jays.

Boyer was a beast in this one, throwing for 342 yards on 25-of-31 attempts with three passing TDs and a rushing score to boot. Farlow paced the ground game with his 71 yards and two touchdowns on 19 carries, while Springkamper absolutely went off in the contest with a 209-yard effort through the air. Boyer’s favorite target grabbed 14 passes, scored two TDs and also rushed for 20 yards on three carries.

On the other side, it was a game of big scoring plays for Jefferson. They finished the game with five touchdowns on plays that averaged nearly 47 yards per snap.

Usery led the way with 97 yards on the ground, stopping his streak of 100 yards rushing or more in consecutive games at three. His two touchdowns gave him a team-high 12 on the season.

Stokes added a season-high 78 yards rushing and his third touchdown. His touchdown reception was his first of 2022.

Williams finished with a season-high 127 yards passing with two touchdowns, giving him a total of six for the season. He also chipped in with 55 yards on the ground.

Breeze continued his strong play at wide receiver with his sixth touchdown catch.

Stokes and Usery were strong on both sides of the ball as each were credited with 11 total tackles apiece. Usery also had a fumble recovery. Breeze came to play on defense as well with eight tackles, while Gavin Theodoro finished with five tackles and a pass break-up.

Jefferson continues to sit in the middle of the seven-team Class 2, District 1 standings with one regular season game to go, and the Dragons are now third in Class 3 with a 6-2 record, sitting behind Valle Catholic and Park Hills Central.

The Blue Jays at 4-4 face another tough home match-up on Friday, October 21st when the I-55 Conference champion St. Vincent Indians pay a visit. The Indians only loss this season is to Valle Catholic.

Ste. Genevieve will close out their regular season at home next week against a tough 5-3 Kelly squad.

Ste. Gen Comes Out on Top in Shootout with Jefferson