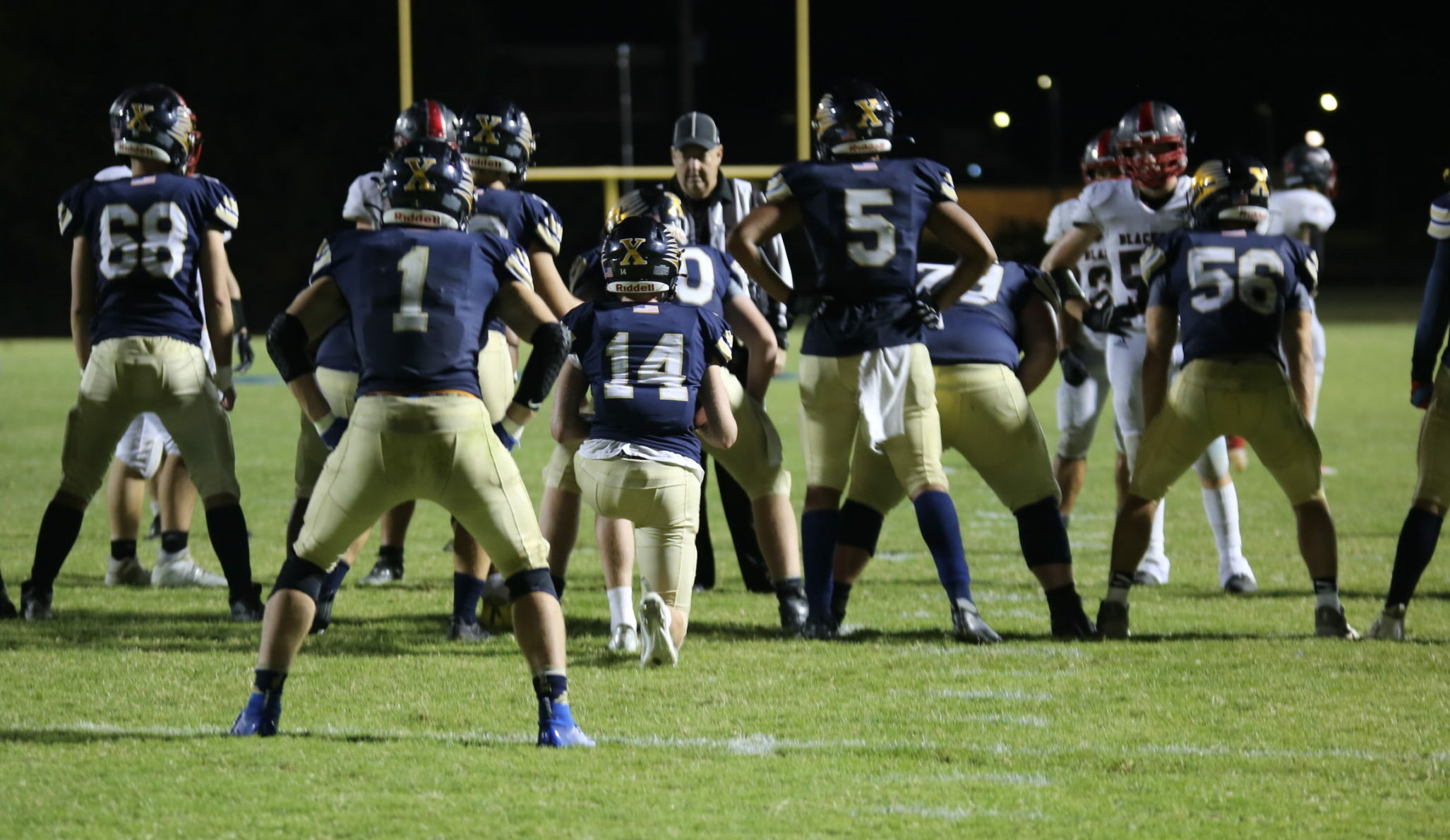 The St. Pius X Lancers win their fourth straight game on Friday as they narrowly edge the Blackcats of Herculaneum.

“An ugly win is better than a pretty loss” is an old coaching cliche. On Friday night, it held up.

In an I-55 Conference slugfest that featured hard hits and plenty of penalties, the St. Pius X Lancers outlasted the visiting Herculaneum Blackcats 13-6. Both teams entered the contest with 3-1 season records, however, Herculaneum’s lone loss on the season was to another conference opponent, St. Vincent during Week 4.

Neither team’s offense moved the ball downfield early in the first quarter. Any momentum gained was quickly negated by penalties, causing both teams to trade field position and possession. The Lancers offense would strike first with 2:55 left in the first quarter on a 35-yard touchdown pass from Junior Quarterback James Smith to Senior Receiver Matt Miriani. After a failed 2-point conversion attempt, the Lancers took a 6-0 lead into the second quarter.

Both defenses flexed their muscles in the second quarter and made life miserable for the offenses. Herculaneum accumulated 35 yards of offense in the quarter while St. Pius X would tally 33 yards of their own. Penalties continued to add another level of frustration for both sides as the teams combined for 12 penalties and 115 yards… in the quarter alone. After an hour and a half of football, the two teams entered halftime with the Lancers still on top 6-0.

Receiving the ball to start the second half, Herculaneum tried to establish their passing game out of the gate, but three straight Jackson Dearing incompletions resulted in another punt for the Blackcats. Unfortunately for the Lancers, the offense continued to be plagued by penalties, killing any momentum gained.

A 26-yard run by Senior Running Back, Mike Moloney, gave the Blackcat offense life and moved the ball down to the Lancer 12-yard line. However, two plays later, the Lancer defense came up with another play as Sophomore Linebacker, Justin Lehn, intercepted Dearing’s pass. Celebration would be short-lived for the Lancers though, as Smith would not return to the game after a tackle from a couple of Blackcat defenders. Sophomore backup Quarterback, Brennan Ervin, entered the game and took over the reins of the offense, as Smith would not return, and the Lancers were forced to punt again. Both teams continued to trade field position with punts as the defenses held their ground and the score remained 6-0 in favor of the Lancers through three quarters.

The fourth quarter began with more of the same, as both teams exchanged punts on their first possessions. However, a 37-yard punt return from Senior Receiver, Eli Frimml, put the Lancers at the Blackcat 15-yard line. Three plays later, the Lancers capitalized on Frimml’s return, scoring on an 8-yard touchdown run by Senior Running Back Austin McGuckin with 8:07 left in the game. A converted extra-point try by Senior Andrew Merseal put St. Pius X up 13-0 over Herculaneum.

During the next possession, the Blackcat offense gained two first downs on two Lancer penalties. The great field position finally gave way to a Herculaneum score, as Dearing found Senior Wide Receiver, Dylan Jarvis, on a 7-yard touchdown pass with 2:30 left in the game. After a failed extra-point attempt, the Lancers still held a 13-6 lead. The next Lancer series on offensive yielded only 3 yards rushing, and they lined up to punt on 4th down. However, a botched snap to Merseal and a 3-yard loss would give the Blackcats the ball on the Lancer 46-yard line with 1:40 left in the game.

The Blackcats seemed to have all the momentum and Dearing moved the ball through the air deep into Lancer territory. A holding penalty and an incomplete pass put the Blackcats at second-and-goal from the Lancer 22-yard line with under 30 seconds left in the game. On the next play, Lancer Defensive Back, Connor Hamilton, made the play of the game, and intercepted Dearing’s pass to Wideout Lucas Bahr at the goalline, sealing the game for the Lancers as they held on to win 13-6.

Herculaneum fell to 3-2 on the season and 1-2 in the I-55 Conference. They will host conference opponent Grandview next Friday as they look to even their conference record.

St. Pius X improves to 4-1 on the season and 3-0 in the I-55 Conference. They will travel to Cuba next Friday.