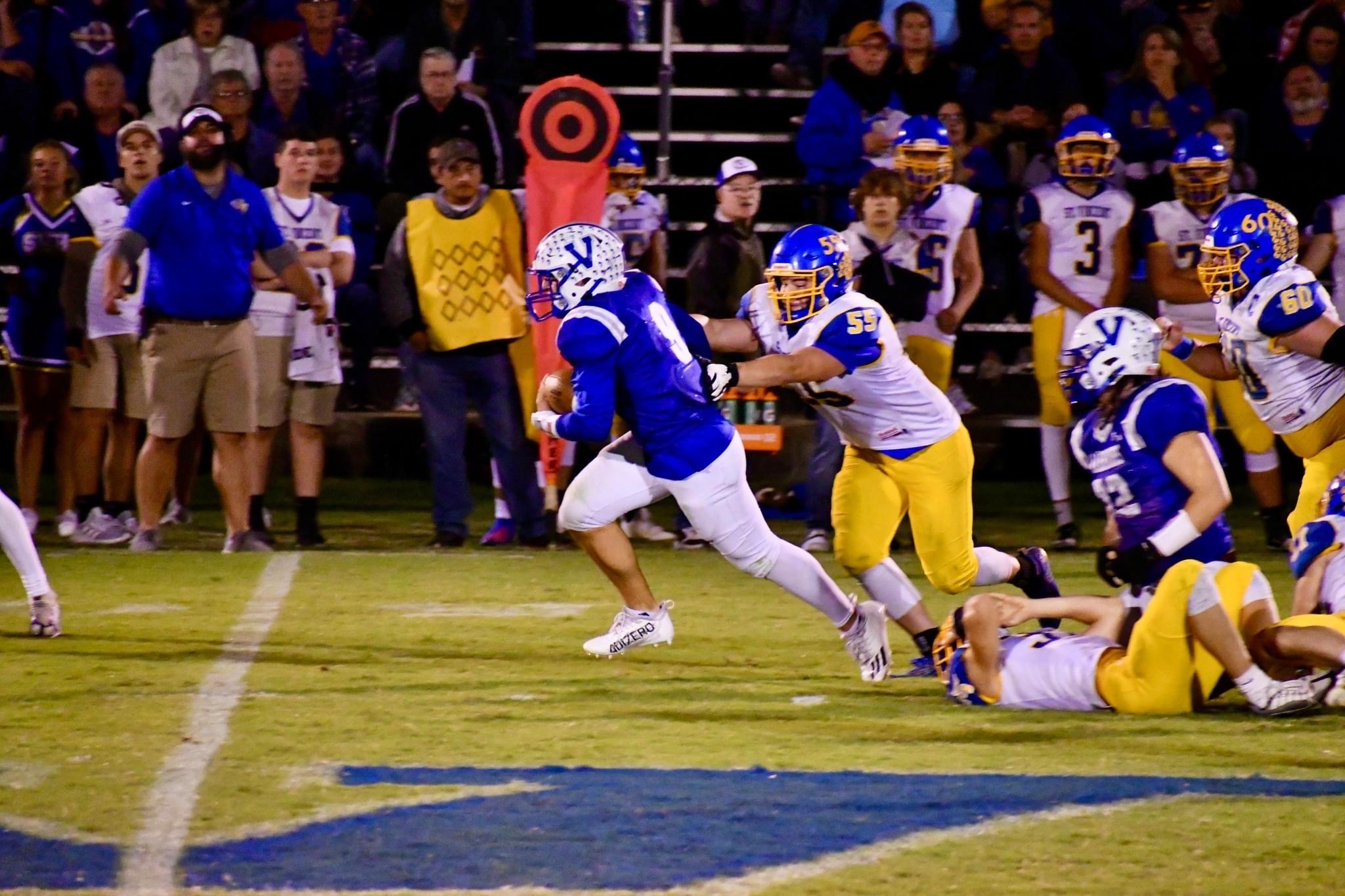 The Valle Catholic Warriors score 60 first half points for the second straight week to take down their longtime Catholic School rival, St. Vincent.

The Valle Catholic football team continued to put up videogame like numbers in its homecoming win Friday night against ancient rival St. Vincent. In fact, it was the 107th time these two squads have matched up, and there is a lot of history there. When Valle first became a team in 1928, St. Vincent actually supplied the Warriors with jerseys so they could take the field for the first time. The respectful rivalry has continued ever since.

Valle has gotten the better of the Indians in recent years, but this season St. Vincent started 4-0 for the first time in 22 years and has a revamped roster. Still, it didn’t seem to matter against the might Warriors, as they were picked apart 67-7.

In the demolition of the Class 1 State-ranked Indians, the Class 3 State-ranked Warriors scored at least 60 points in the first half for the second straight week, and in customary fashion, Valle scored before the fans could settle into their seats.

Just 1:19 after the opening kickoff, quarterback Chase Fallert scored on a 15-yard run. Will Kuehn‘s PAT failed and it was 6-0.

Just 1:13 after that, Sam Drury caught an 11-yard scoring pass from Fallert to make the score 13-0 after the PAT.

St. Vincent showed signs of maybe making this a game when Trevor Moonier caught a 19-yard touchdown pass from Christian Schaaf at the 7:40 mark of the first quarter. The PAT cut the Valle lead to 13-7.

But, that would be it for the Indians, while the Warriors continued to make the endzone their second home.

Valle scored again at the 6:36 mark when Bryce Giesler ran it in from 41 yards out. The PAT again failed and it was 19-7, but the game was still not even halfway through the first quarter.

Giesler would score again at the 2:05 mark, this time on a nine yard pass from Fallert. Those two hooked up again on the two point conversion to make it 27-7.

The Warriors added a fifth score just as the first quarter ended on a 61-yard touchdown run by Tim Okenfuss. Another failed PAT left the score 33-7 at the end of a fast and furious first quarter.

The second quarter opened much like the first with Valle scoring just 30 seconds into the period. This time Alex Viox tossed a 23-yard scoring strike to Grant Fallert. The two point conversion was no good leaving the score at 39-7.

Two minutes later, Okenfuss found the endzone again on a three yard run. Kuehn’s PAT made the score 46-7 with 9:31 left in the opening half.

Midway through the quarter, Grant Fallert scored again, this time on a 58-yard run and Kuehn’s extra point made it 53-7.

Valle closed its scoring extravaganza at the 4:22 mark when Rylan Fallert joined in on the fun with a 37 yard run. The extra point pushed the lead to 60-7 at halftime.

The last three weeks in the first half, the Warriors have scored 53, 61 and 60 points. That’s not a misprint.

The only score of the second half came at the 7:51 mark of the third quarter when Brendon Corbett took it in from five yards out. Kuehn added the PAT to make the final 67-7.

Through five games, Valle has scored more than 60 points three times, 59 in another and a “measly” 48 in the remaining contest.

The Warriors rolled up 404 yards rushing and seven touchdowns. A fun little statistic to go along with the running game, of the 12 players who carried the ball, six of them were named Fallert and three of them scored.

Giesler led the rushing attack with 114 yards and his tenth touchdown of the season.

Valle’s rushing attack averages more than a first down every attempt at 10.8 yards per carry.

Drury led the receiving corps with three catches for 52 yards.

The videogame like numbers are not exclusive to the offense. The defense collected 22 more tackles for loss by an impressive 12 different players against St. Vincent, giving the Warriors a whopping 84 on the season.

The Warriors are 5-0 and will host another 5-0 squad in Park Hills Central Friday, September 30th at 7 p.m. The Rebels have scored at least 41 points in four games, including 58 against Caruthersville and 55 versus Potosi.

This will be a huge game, with the number one seed in the District and a first round bye likely on the line.