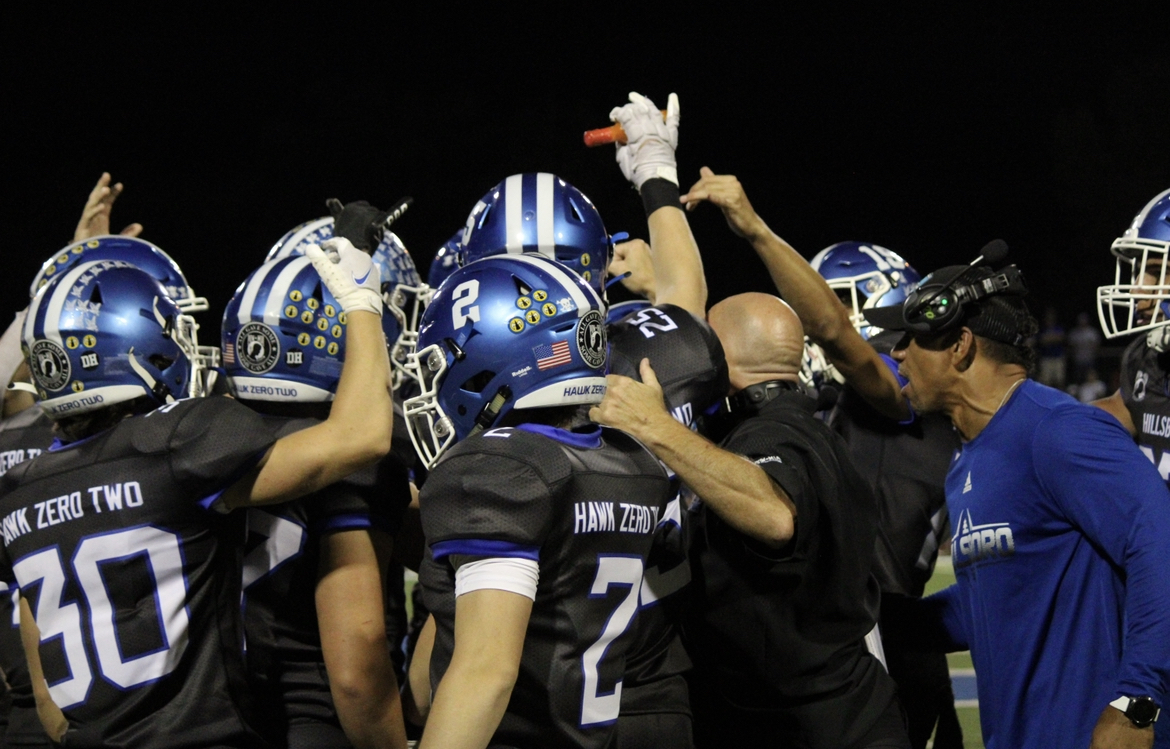 The Hillsboro Hawks move to a perfect 4-0 on the season after wiping out previously undefeated North County 31-10.

Hillsboro had two goals in mind on Friday night against previously undefeated North County in order to win; run the ball like they have in their previous three games and stop Raiders running back Jobe Smith.

The Hawks achieved both of those things and defeated North County 31-10 at Hillsboro High School to start their season at a perfect 4-0. They will undoubtedly move up the Missouri State High School Football rankings next week as a result.

“Our goal on defense was to contain Smith as much as possible,” Hillsboro head coach Bill Sucharski said. “Our kids played great defensively and bottled him up all night.”

The Hawks only allowed Smith 27 yards on 16 carries for the game, but the talented Senior running back/safety did manage to catch three passes for 44 yards. One of those darts, courtesy of quarterback Jack Moore, produced the only touchdown of the game for the Raiders.

The Hawks however started the scoring in this one with an Austin Romaine 4-yard run that generated a 7-0 first quarter lead, after a made PAT by near automatic kicker Nick Marchetti.

The Raiders then cut the lead down to four with a made field goal at the 7:46 mark of the second quarter, as GR Mullins split the uprights with a 24-yarder.

Just before halftime, North County got on the board with what would be its only touchdown of the game, as Moore found an open Smith, and the impressive back took it to the house from 15 yards out. That put the Raiders in the lead 10-7 with a successful Mullin’s PAT and only 15 seconds on the game clock. That would be just enough time though, as Hillsboro would take the kick-off down to the North County 27-yard line with :02 seconds remaining. That paved the way for Marchetti to drill a 37-yard field goal to tie the game up at 10 points apiece.

Coach Sucharski’s locker room speech must have been a good one, because the second half was all Hawks. They kicked off the third quarter with a 55-yard rumble by Romaine that gave them a 17-10 advantage after a successful Marchetti PAT with just 3:14 expired off the clock.

Hillsboro turned on the jets after that and found the endzone two more times in the final quarter, as quarterback Preston Brown ripped one off from 36 yards out to boost the lead to 24-10 with 10:28 left. The final Hawks’ touchdown was scored with 2:33 left in the game, this time by Payton Brown, who took the handoff from Preston to the house from 31 yards away to give Hillsboro a commanding 31-10 lead. That score would hold up and keep Hillsboro’s perfect season alive.

The Hawks out-rushed North County 299 to 51 and out-gained them 349 to 211 overall, which barely speaks to the overall defensive effort of Hillsboro’s impressive front five.

Preston Brown was the top rusher for Hillsboro with 112 yards and a TD on 12 carries, while Romaine (12 carries, 106 yards, TD) and Payton Brown (6 carries, 61 yards, TD) also contributed to the ground game in a big way.

On defense, Hillsboro limited North County to just 51 yards on the ground, but did give up 160 yards and a touchdown through the air. Romaine was solid again at linebacker with 10 tackles and 1.5 sacks to lead the Hawks, while Jaxin Patterson notched seven tackles with four of those for loss. Patterson, Payton Brown and Connor Boyster each assisted on a sack.

Hillsboro (4-0) will host Festus (2-2) next Friday at Hillsboro High School as the two crosstown rivals will lock horns for the first time this season. Coach Sucharski would like to see an all-around more efficient effort against Festus come Friday, saying, “We will look at some tape to see what Festus does well and hopefully we can have a much cleaner game on offense and continue to play solid defense.”