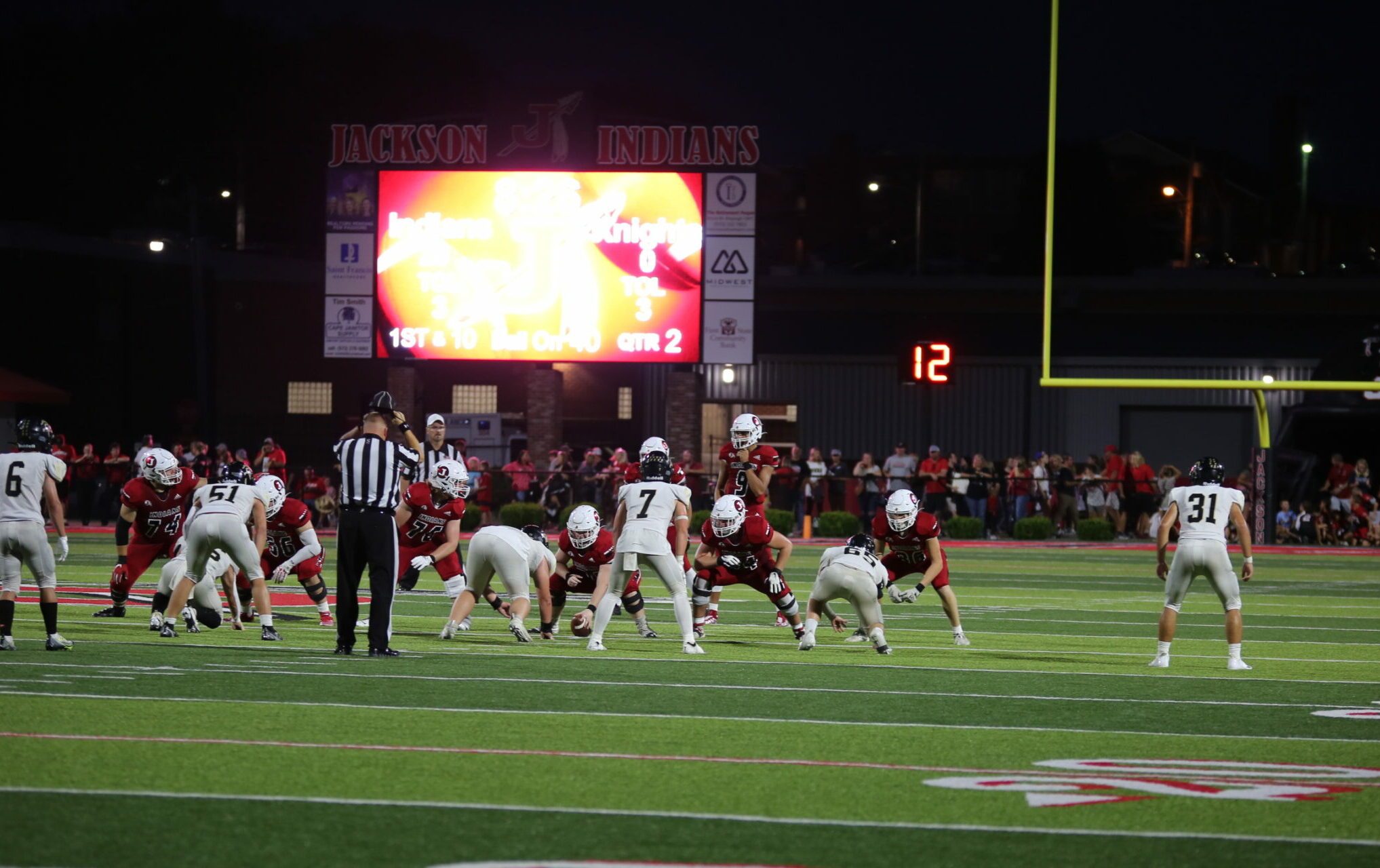 The Jackson Indians come through with a dominant 47-7 Week 3 victory against the Farmington Knights for their first win of the season.

The Jackson Indians got the monkey off their back on Friday Knight, and sent a message to the rest of their competition: “we’re baaaack.” The Tribe had their most complete effort of the season in Week 3 as they welcomed the Farmington Knights to The Pit and dispatched them with ease, 47-7.

Facing their first conference opponent of the year, the Indians had a take no prisoners attitude from the jump. The defense was as stout as ever and in ball-hawking mode in this one, forcing and recovering a fumble on the second play of the game. It only took a minute after that for the offense to put a crooked number on the board, as QB Zach Calder hooked up with wideout Kai Crowe for a 26-yard strike. Then just three and a half minutes later Calder found Senior Isaiah Davis for a 25-yard dart that made the score 14-0.

Still in the first quarter, and after another successful defensive stop, Jackson employed the two-quarterback system and Adrian Fox got in on the scoring. He found Davis from seven yards out and Mr. Reliable took it to the house for his second consecutive score and a 21-0 lead to cap the first quarter theatrics.

Amazingly enough, the second 12 minutes of the game would be even more exciting than the first for the raucous crowd at The Pit. With Calder back under center the Indians made quick work of their drive as he hooked up with Crowe for a 37-yard bomb to make the score 28-0. That seemed to be enough domination through the air for Head Coach Brent Eckley, as the Indians switched over to the ground game.

Lead back Tony Williams broke free with a back-breaker and scampered 40 yards downfield for a TD, effectively sealing the fate of the Knights. But Jackson wasn’t done pouring it on just yet as his partner in crime, Zach Crump, broke loose for a 14-yard score to put the Tribe up 41-0. It was Williams though who had the honor of icing the cake, as he closed out the first half scoring with his second touchdown of the game. This time he bulldozed in from three yards out and gave Jackson an insurmountable 47-0 lead at halftime.

The second half was considerably more tame, as the Indians put in some reserves and just rode their stifling defense to close out the game. Farmington did manage to scratch out a meaningless touchdown around the ten-minute mark of the fourth quarter, but that was as close as they would get. Jackson got the sorely needed 47-7 victory to turn the ship around and potentially flip the script on their inauspicious season’s beginning.

Defensively, the Indians had an answer for everything Farmington threw at them. They shut down a normally very dangerous Knights’ offense and allowed just 148 yards of total offense, and Farmington didn’t even attempt a single pass. Maybe they should have because the ground game didn’t offer much more success, and the Indians won the turnover battle 2-0.

Offensively the first half was incredible, led by the two-headed monster of Calder and Fox. Calder was 8-of-10 for 14 yards and three scores, while his counterpart was 4-of-5 with 74 and a score. Fox also had 31 yards on the ground. On the receiving side of things Crowe and Davis were outstanding with 100 and 98 yards through the air, respectively, and each had a pair of touchdowns.

As for the ground game Williams and Crump found the end zone three times between them, totaled nearly 100 yards and averaged over nine yards per carry. Zach Zimmerman actually led the team in rushing yards with 64 and attempts with 10 as the lead back in the second half.

This was a statement game for the Indians and they came through in spades. They’re still only 1-2 on the season, but it feels like the tide is turning. And that’s bad news for everyone remaining on their schedule.  They will look to make it two in a row and get back to .500 next Friday as they host the Mules of Poplar Bluff.