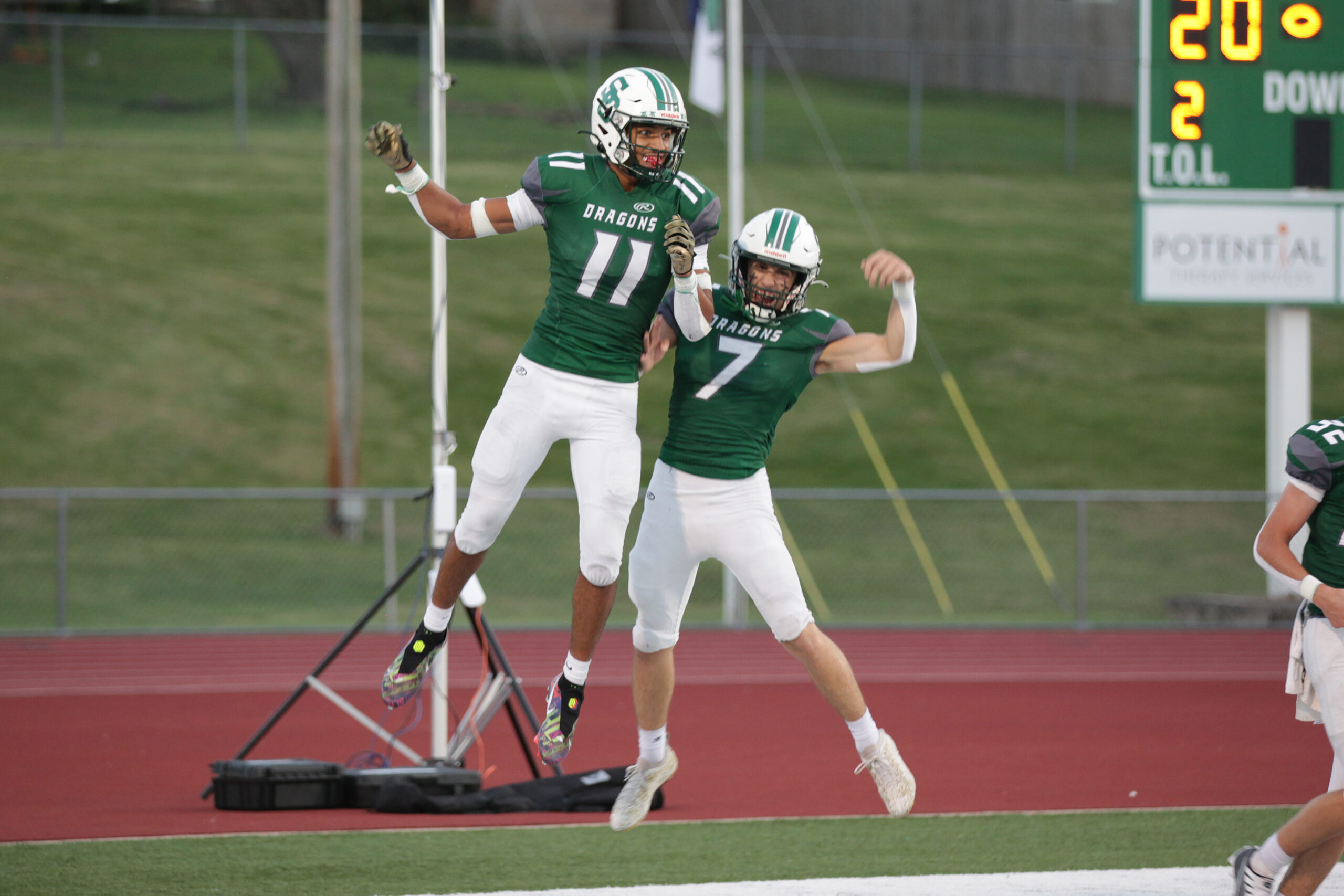 Ste. Genevieve Explodes for 70 First-Half Points in 83-36 Drumming of Affton

The Ste. Genevieve Dragons hang a staggering 83 points on Affton to win their second consecutive game to start the season.

The Ste. Genevieve Dragons were firing on all cylinders Friday night, putting up 70 first-half points as the Dragons blew out Affton at home 83-36 to move to 2-0 on the season.

Affton would open the scoring in the first quarter as Jaguar quarterback Antonio Muyco found an open wideout for a 29-yard touchdown, but the two-point conversion failed and Affton held a 6-0 lead.

It didn’t take long for Ste Gen to get on the board though. Dragon running back Ayden Butcher ignited the team and hometown crowd when he crossed the goal line to tie the game up with a nine-yard scamper. Kicker Bryant Schwent then quickly gave the Dragons the lead with a successful extra point.

Affton regained the lead quickly thereafter as Muyco connected with a 91-yard TD strike to put the Jaguars back in the lead, 12-7, after another unsuccessful two-point conversion.

That was the last time the Jaguars and Head Coach Tony Muyco II would have the lead though.

The very next Ste. Genevieve possession, quarterback Aiden Boyer found wide receiver Kaden Flye on a 58-yard completion that put the Dragons up 15-12 after a successful two-point conversion by Boyer.

Ste. Genevieve then started putting up points like it was going out of style, and the Dragons’ defense (Aiden Meyer’s 32-yard interception return), coupled with two rushing touchdowns by Butcher and a second touchdown by Boyer to wide receiver Jayden Rhinehart, had Ste. Genevieve up 43-12 at the end of the first 15 minutes of play.

The second quarter more of the same for the Dragons as rushing touchdowns by Jack Farlow, Jacob Johns, Boyer and Butcher saw Ste. Genevieve’s lead balloon to the biggest of the game, 70-20.

“Offensively the game plan is to always take what the defense gives us,” Dragons head coach Jay Pope said. “That is exactly what we did. We saw Affton playing light at the line of scrimmage and our offensive line made some huge holes for our backs so we stuck with the running game throughout.”

By the end of the game, Ste. Genevieve had put up 83 points and had rushed as a team 26 times for 257 yards and five touchdowns.

Boyer hit seven of 11 of his targets for 175 yards and threw two for scores while Flye led all Ste. Genevieve receivers with 91 yards receiving and pulled in one touchdown. The Dragon’s defense also accounted for a touchdown as defensive back Meyer picked off a Muyco pass and returned it to the endzone.

“Our backs ran great tonight,” Pope said. “They used the holes the O-line made for them and some of them were big enough to drive a dump truck through. Boyer is a very smart leader and does a fantastic job managing and understanding the nuances of our offense. Butcher and Flye give us a dual threat offense and when you mix in our other ball carriers it allows us to attack defenses differently.”

Rewatch the Dragons dominate on the Streamline Sports app:

Ste. Genevieve Explodes for 70 First-Half Points in 83-36 Drumming of Affton