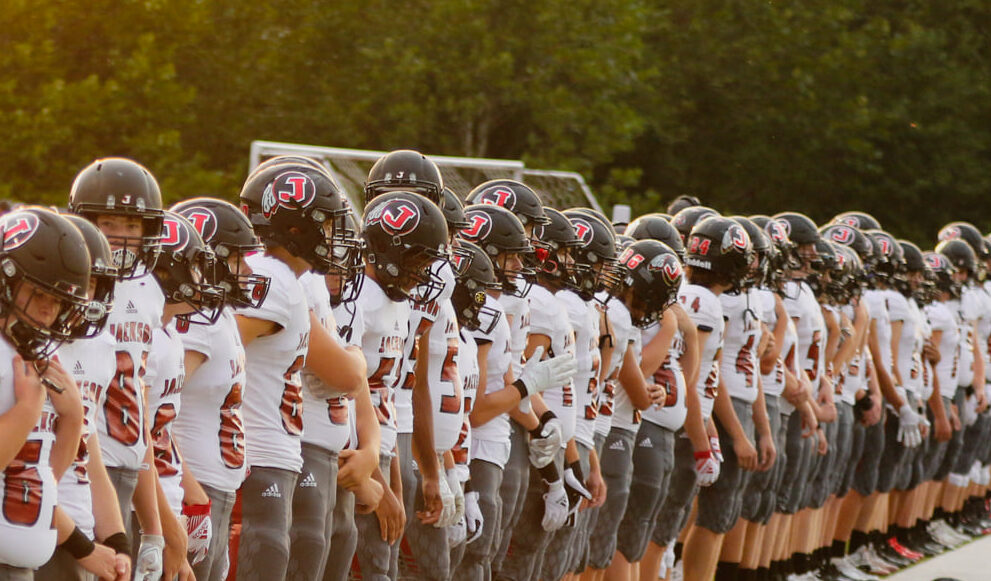 The Jackson Indians fall 41-14 to the Vikings of Francis Howell, losing consecutive games for the first time in seven years.

On Friday night the Jackson Indians took on a Class 5 offensive juggernaut in the Francis Howell Vikings, and the end result was not what Indian fans were hoping for. The Vikings scored early and often and Jackson couldn’t muster much offense of their own, falling 41-14. The loss marked the first time since 2015 that the Indians have lost back to back games, and dropped them to 0-2 on the young season.

The game was actually a lot closer than the score indicated, but missed opportunities and turnovers were bugaboos for the Indians that they just couldn’t overcome. The contest started out like gangbusters with Howell breaking off a 52-yard TD run to open the scoring, but Jackson fired right back as Zach Calder hit Isaiah Davis in stride for a 38-yard strike to tie the game at 7-7.

The Vikings would answer the bell though with a four yard run to close out the first quarter before opening the second with another rushing TD to go up 21-7. Jackson had some fight in them though. Francis Howell was driving again, but the Indians forced a key fumble with just a minute and a half remaining and Calder immediately pounced, hooking up with Kai Crowe for a 28-yard score to trim the lead to 21-14.

Then on the next possession the Indians forced another fumble and recovered it with less than a minute to go. They drove into the Vikings’ red zone, but ultimately turned the ball over on downs and couldn’t break the goal line. As the game clock hit zeros Jackson found themselves still trailing after one half of football.

Then came the third quarter, where things quickly got out of hand. The Indians muffed the opening kickoff and the Vikings recovered it before punching it into he end zone from two yards out. To add insult to injury, Calder was trying to find Davis again to close the gap but his throw was picked off and the Vikings took it to the house to complete the pick-six and extend their lead to 35-14.

The defense held strong in the second half of this game and really stood their ground, only allowing a pair of field goals, but the damage was too great and the offense just couldn’t get the chains moving. The Tribe fell 41-14 and dropped to 0-2. Still, Jackson didn’t look as overmatched as the final score depicted. They just had some bad breaks and costly mistakes. Sometimes that’s just how football goes.

Offensively Calder was 9-of-18 for 100 yards through the air with a pair of touchdowns, but was also picked off twice. Zach Crump was the only Indian to make any noise in the ground game with 23 carries for 89 yards, while Davis and Crowe were pretty much Calder’s only targets. They caught five and three passes for 54 and 43 yards, respectively, and each scored a touchdown.

The defense, which had shining moments in this one, allowed 390 total yards with 269 of them coming on the ground. They pretty much kept the passing game in check and the two huge fumble recoveries almost flipped the script at the end of the first half. Certainly some positives to build on for next week.

This was a tough opponent that only lost one game last year, making to the State Quarterfinals, and is now 2-0 ,having outscored their opposition 86-14. A couple bounces go their way and this could have been a very different game for Jackson, but they need to shake it off and have a hard week of practice to prepare for Farmington in Week 3.

The Jackson faithful are ready for that first win.

Rewatch the Jackson game on the Streamline Sports App: