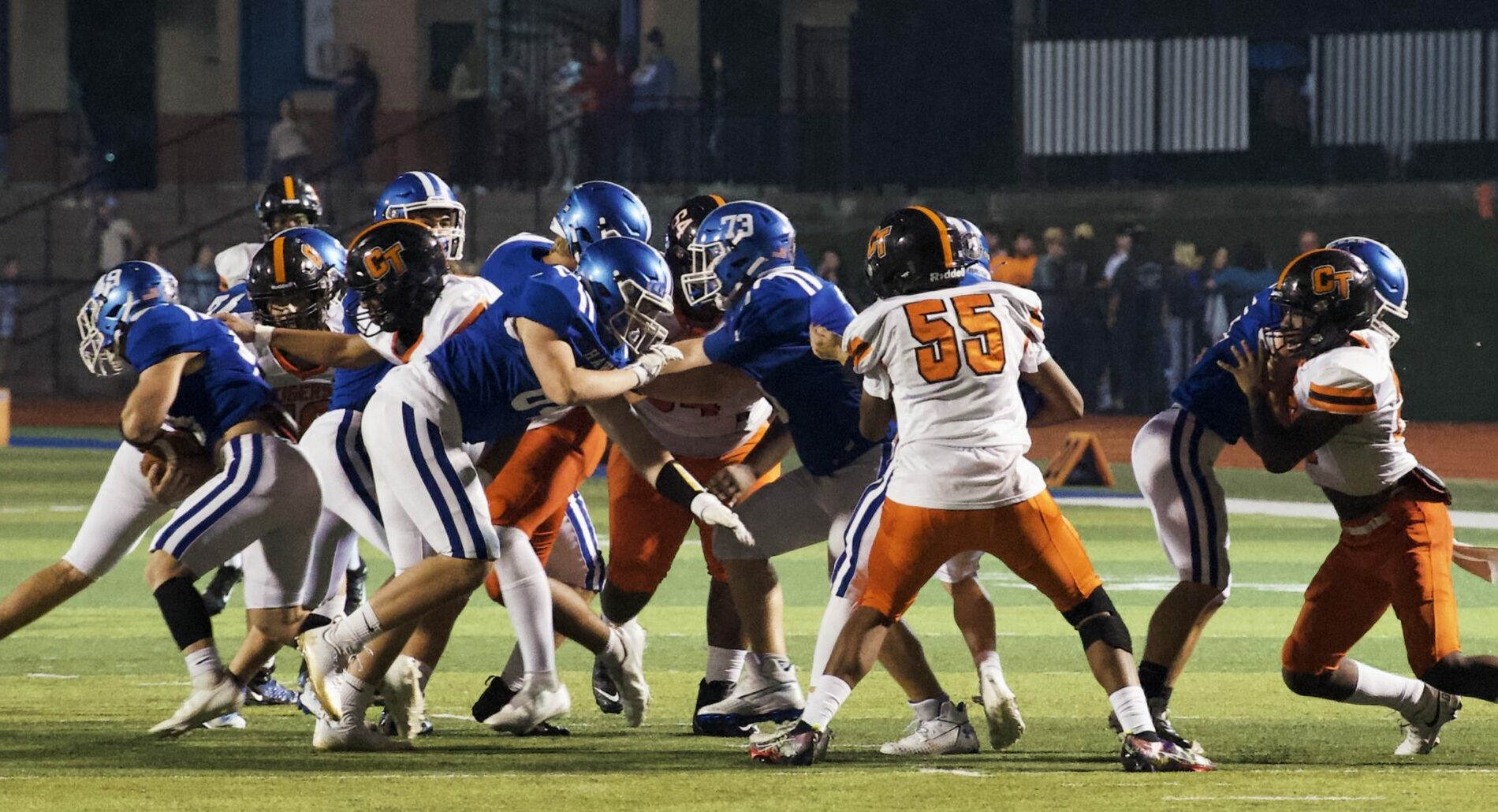 The Hillsboro Hawks had their way with the Cape Central Tigers on Friday in a 47-7 route that left the Hawks undefeated and evened the Tigers’ record at 1-1 on the young season.

A week removed from dispatching one SEMO Conference team, the Hillsboro Hawks proved Friday night that a dominating running game and defense are two aspects needed to take down another SEMO Conference foe. The Hawks rolled over Cape Central 47-7 at Hillsboro High School behind 510 yards rushing and three forced turnovers.

After an opening first-possession turnover by the Hawk’s defense, Hillsboro coach Bill Sucharski found success in his team’s running game, as starting back Austin Romaine ran downhill with force and purpose, finding the end zone with 11:07 remaining in the opening quarter. The 6-foot-2, 220-pound Senior pounded the ball into the endzone from six yards out to give the Hawks a quick 8-0 lead after Hillsboro successfully converted a two-point try.

After limiting Cape Central to a quick three-and-out on defense, the Hillsboro offense would turn to starting quarterback Preston Brown, and he would find wide receiver Dalton Ross for an 11-yard touchdown. Kicker Nick Marchetti drove the extra point through the uprights to increase the lead to 15-0 with 6:36 left in the first quarter.

On the very next possession for the Hawks, Brown would fine Ross again, this time from 13 yards to give Hillsboro a 22-0 lead with the extra point good by Marchetti at the end of the quarter.

The Hawks continued to score at will on the Tiger defense, and the Hillsboro defensive unit continued to limit the Cape Central offense to three-and-outs. Limiting Sophomore running back Zai’Aire Thomas’ touches was key, even on kickoffs, as Marchetti angled his kick away from the speedy Thomas, or would squib kick it to another Tiger player.

“We thought their plan would be to stop Zai’Aire (Thomas),” Cape Central coach Kent Gibbs said. “Hillsboro’s coaching staff is smart and they did what any smart staff would do…take the opposing team’s best weapon away. We realize other teams will do that in the future so we will need to execute well in other areas to combat that.”

Coach Sucharski and his staff’s game plan went exactly the way they drew it up as Thomas did not touch a single kickoff and only managed six rushing attempts for 34 yards.

And while the Tiger’s offense continued to struggle, the Hawk’s offense flourished, running up the score to a 35-0 halftime advantage as running back Payton Brown found the goal line from 15 yards out and quarterback Preston Brown hooked up with receiver Chase Sucharski for a 32-yard strike before the second quarter came to an end.

Romaine found paydirt once again well into the third frame, getting loose for a 37-yard scamper to raise the score to 41-0 with another made extra point.

Cape Central finally found the endzone with 7:14 left in the final quarter as Junior running back Tae’Shawn Arnold scored from one yard out to put the Tigers on the board, making it 41-7 after a successful extra point attempt by kicker TJ Mackins.

The final score of the game came from Hillsboro back Chris Duncan who ran in from two yards out to increase the Hawks’s lead to 47-7.

Hillsboro out-gained the Tigers 510 to 138 and victimized the Cape Central defense for 363 yards on the ground with Romaine leading the way with 128 yards and two scores on 10 carries. Payton Brown added 69 yards and a touchdown on seven carries, Jaxin Patterson ran for 66 yards on nine carries and Cohen Linderer had 62 yards on just two carries. Duncan found the endzone on one of his two rushing attempts.

Preston Brown threw for 121 yards, completing six of his eight attempts and threw for three touchdowns, while the Hawks leading receiver was Ross who caught five receptions for 61 yards and two TDs.

Hillsboro was led defensively once again by Romaine who earned six tackles, with one going for a loss, and recorded a sack. Fellow Senior Alex Medina recorded 4.5 tackles and 2.5 sacks while Patterson collected four tackles and also had 2.5 sacks.

“Hillsboro is a very tough, physical and aggressive football team,” Gibbs said. They dominated the game from start to finish in all aspects. There is a reason they are state-ranked.”

Cape Central (1-1) will look to get back on the winning track next Friday as they travel to Poplar Bluff (0-2) at 7 p.m.

Rewatch the all the action of the Hawks vs Cape Central on the Streamline Sports app. Download links below: