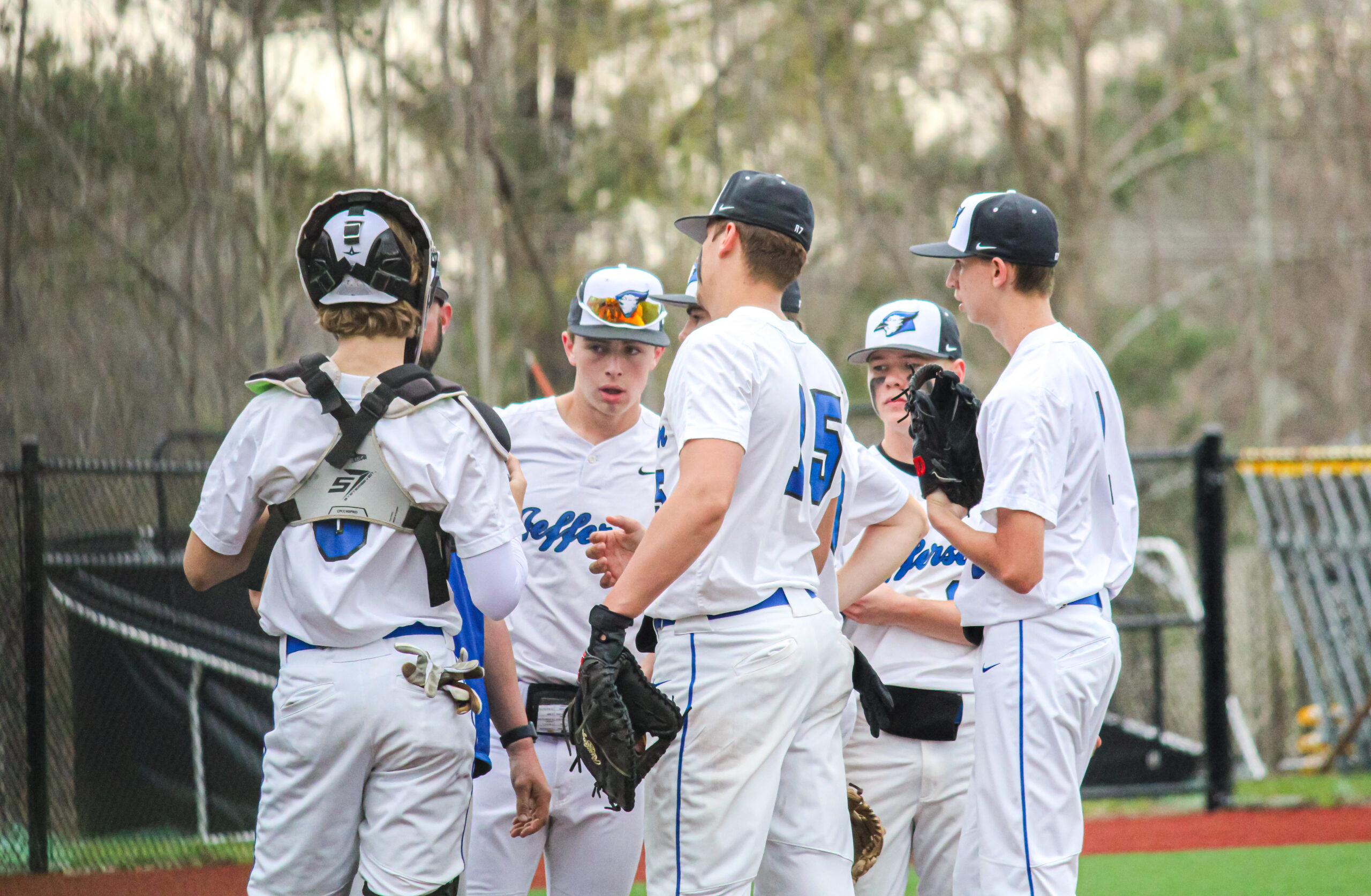 After a disappointing early week 9-2 loss, the Jefferson Blue Jay bats came alive, finishing on a high note in a 14-3 victory.

With the Spring sports season just past the midpoint, the Jefferson R7 Varsity Baseball team has found themselves two games below .500 and looking for a spark. In two games this past week, the Blue Jays did what they could, but only managed to bring home one win.

In the first game of the week on Tuesday, April 19th, against Herculaneum, Jefferson found themselves quickly playing from behind. After a first-inning error, the flood gates opened as the Blue Jays coughed up six runs. Herculaneum added one more in the second and another in the fourth.

Jefferson attempted a late rally but only was able to plate two in the top of the sixth. For good measure, Herculaneum added one more in the bottom half, and then managed to hold the Blue Jays at bay in the final inning.

Despite outhitting their opponents seven to five, the two Jefferson errors were costly in the 9-2 loss. Nonetheless, three Blue Jays had two hits off the bats of Sam Stokes, Max Schnitzler and Colton Richardson. Stokes had an RBI, while both Schnitzler and Richardson had doubles. CJ Johnson also had a double and the other RBI.

Starting pitcher Cole Robinson lasted only one-third of an inning, allowing six runs, before handing it over to Stokes who went 3.1 innings. Nolan Naucke finished the game, pitching 2.1 innings, with five strikeouts.

Jefferson however wiped the slate clean and came out with a vengeance against Valley Park on Thursday, April 21st. The Blue Jays got started right away, scoring a run in the first inning, but exploding with five more in the second. Valley Park cut the gap down with three of their own, but Jefferson opened the lead up with two more in the fifth to make it an 8-3 game.

That score didn’t stand for long, as the Blue Jays poured it on with a hitting frenzy, scoring six runs in the top of the sixth to make it a 14-3 game. Valley Park had no answer and the game concluded via mercy rule after the sixth.

Even though Jefferson had 12 hits and 14 runs, the big story of the game was an outstanding performance from Jack Hueter, who had a five-for-five night, including a double, and seven RBIs. For good measure, he also stole two bases. With two RBIs on two hits, Schnitzler also had a great performance. Not to be outpaced, Richardson notched two hits as well.

Richardson was also the starting pitcher, picking up the victory for his team, allowing two earned runs, and five walks across five innings. AJ Ciliberto finished the game, throwing the final inning.

With a big win to end the week, Jefferson now has a 7-9 record. With plenty of baseball to go, now is the time for the Blue Jays to make a move, and with the momentum rolling, hopefully they’ve found their spark.