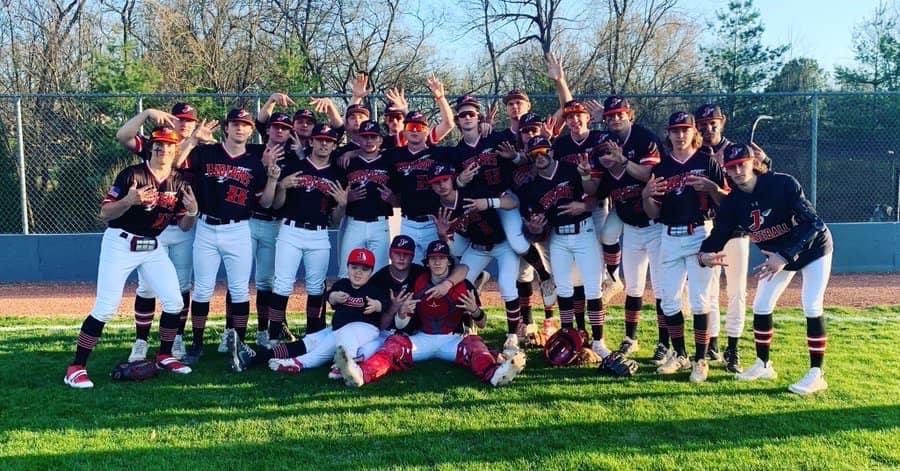 The Jackson Indians take down their rivals, the Cape Notre Dame Bulldogs, 7-4 on Tuesday to move to 7-1 on the season.

Teams tend to a bring little extra juice and fire into a rivalry matchup, and Tuesday’s tilt between the Jackson Indians and The Cape Notre Dame Bulldogs was no exception. This season’s dominant Boys Varsity squad has been steam-rolling their competition, but per the rules of rivals, this one was no cakewalk. The Bulldogs hung in, but Jackson ultimately prevailed 7-4.

Things got started with a bang in the first inning, and by “bang”, we mean towering moon shot. After a scoreless top of the first, Caden Bogenpohl reached via error on a sharp ground ball to first, and then Baden Hackworth got to work. With a runner on first and a full count at the dish, Hackworth got his pitch and absolutely unloaded, launching a towering drive to left center field that rang off the scoreboard. You could hear the clang from the seats and maintenance may have to come take a look at the board.

With Jackson already up 2-0, they kept the line moving in the second inning as Logan Bruns roped a double to center before advancing to third on a groundout and then streaking home on a wild pitch. That made it 3-0 Indians after two.

Then in the fourth the tribe broke things open. Three singles and and an error led to two more runs before an RBI-groundout plated a third, and suddenly Jackson had a commanding 6-0 lead. The Bulldogs weren’t going away easily though. A sloppy top of the fifth inning that included a walk, an error, a hit-by-pitch and a balk led to a pair of runs for Cape, allowing them scratch their way back into the game.

They followed that up with a single, a double and walk in the sixth that led to two more runs, making it a 6-4 affair. Thankfully the Indians turned an error, a wild pitch and a sac fly into an insurance run to go up 7-4 and hold off the Bulldogs to take down the victory.

That solid offensive effort was backed up by some nifty hurling on the mound, as three pitchers combined to allow just one earned run. Bogenpohl got the start and went a solid five frames, allowing just two hits and two walks that led to the one ER. Oh, and by the way, he fanned 10 for an 18.00 k/9 ratio to get the W. Kaden Kendle pitched a scoreless sixth before Hackworth came in throwing smoke to lock down the save with a 1-2-3 seventh.

He was also the offensive star with his perfect day at the plate, going 2-for-2 with a pair of walks, a single and the aforementioned monster two-run homer. Bruns was the only other player with multiple hits, as he went 2-for-3 with a single and a double and scored a pair of runs. Overall the Indians put up seven runs on eight hits, drew two walks and swiped four bases.

The Indians are now 7-1 on the season and have a big double-header coming up on Saturday before they head to Busch Stadium on Sunday to take on the Edwardsville Tigers in Baseball Heaven. That should really be something special to watch.

Be sure to catch the game, and all the Indians games on our live stream page.