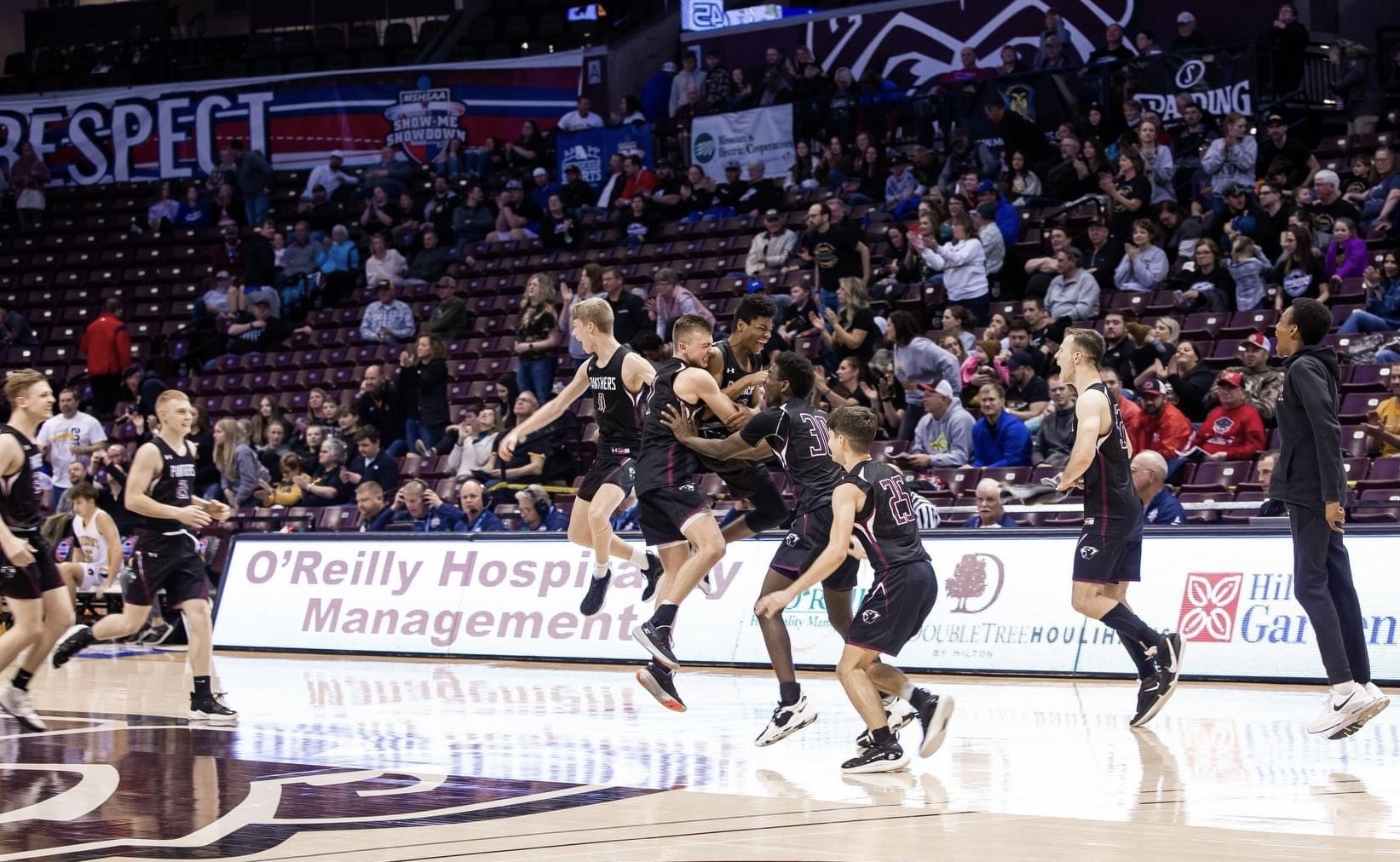 The dream was realized, again, on Saturday night in Springfield, MO as the South Iron Panthers Boys Varsity Basketball team claimed the ultimate prize by repeating as Class 1 District 3 State Champs. The team mantra of “Pounding the Rock” certainly paid off in spades as Head Coach Dusty Dinkins‘ boys made short work of the Stanberry Bulldogs with the 71-45 clincher.

The game started off with a flurry of offense as Drenin Dinkins kicked off his historic game with a three pointer to give the Panthers an early 5-0 lead. He would hit two more from downtown in the first quarter to propel South Iron to an 18-12 lead after the first eight minutes of play. As a team, the Panthers were 4-of-6 from beyond the arc in the first, with Jermartez Burse hitting one as well.

In the second, the Panthers kept pouring it on. Champ McMurry drained a bucket before Drenin Dinkins hit three consecutive field goals, completed an and-one and hit another from the line after being fouled. He then dropped another two-point shot before drilling back-to-back threes. Incredibly, in what seemed like a blink, he had 29 points at the half, which is the second most all time in MSHSAA Final Four history for points scored in a half (31 being the most).

Not lost during the individual effort was the team play of the Panthers, as their defense stepped it up to the Nth degree and shut down the Bulldogs in the second. South Iron won the quarter 23-8, and more or less cemented the championship with that frame. Heading into the locker room at the half they were coasting with an insurmountable 41-20 lead and had the game firmly within their grasp.

Pound the rock they did.

The Panthers didn’t have to do much in the second half, but they still managed to outscore Stanberry in both the third and fourth quarters. Despite the Bulldogs having players at 6’6″, 6’4″ and 6’4″ in their starting lineup, South Iron out-rebounded them 31-24, which was instrumental in taking down the final two quarters 13-10 and 17-15, respectively. No need to do the math in your head. That score works out to a dominating 71-54 in favor of the boys from Annapolis, and was the icing on the cake of a truly dominant season.

The Panthers finished 28-4 overall and won every single tournament they participated in. That’s right. All of them. Coach Dinkins spoke to his team’s dominance and their growth along the way, saying, “Very impressive to see the growth this team made throughout the season! We had great leadership in our Seniors and our underclassmen’s growth and improvements cannot be overstated!”

As for the Championship Final, Drenin led the way with a game-high 34 points, but that was just the tip of the iceberg. His performance on a stage as grand as this was legendary, as he hit 5-of-8 from downtown, led the team in rebounding with 14, steals with three and assists with two. All while playing a game-high 30 minutes. He was also a clutch 7-of-9 from the line in his truly complete performance.

McMurry was next in line as far as scoring with his 13 points, and he also contributed two assists and two rebounds. DJ Prater had nine points, five boards and a steal in his 22 minutes on the hardwood, and the rest of the team came through with an incredible collective defensive effort. Once again, it was a complete Panther victory that is worthy of praise down to the last pair of sneakers that set foot on the court.

Commenting on the year in total and his team’s fantastic accomplishments, Coach Dinkins quipped, “Overall, a historic year that was filled with many wonderful moments! As a result of “Pounding the Rock!” our group of players and coaches worked restlessly at improving our team to be the best it could be with everyone focused on achieving something they could not achieve by themselves … to become State Champions!”

And of course we had to ask about PTR. Coach Dinkins clarified with, “Pound the Rock was our phrase for working relentlessly at difficult tasks over and over and over again until our resistance finally crumbles and we attain our desired goal.”

To any aspiring champions out there, take note. This system works… Twice… In a row.

What a season for these Panthers. It ended in the best possible way, yet it’s still hard to believe it’s over. There is time to celebrate, but the coaching staff is likely already thinking about next year with the big three of Drenin Dinkins, Prater and McMurry graduating and moving on. If anyone can reboot the program though, it’s this crew.

Congratulations on an unbelievable year to the back-to-back State Champion South Iron Panthers!