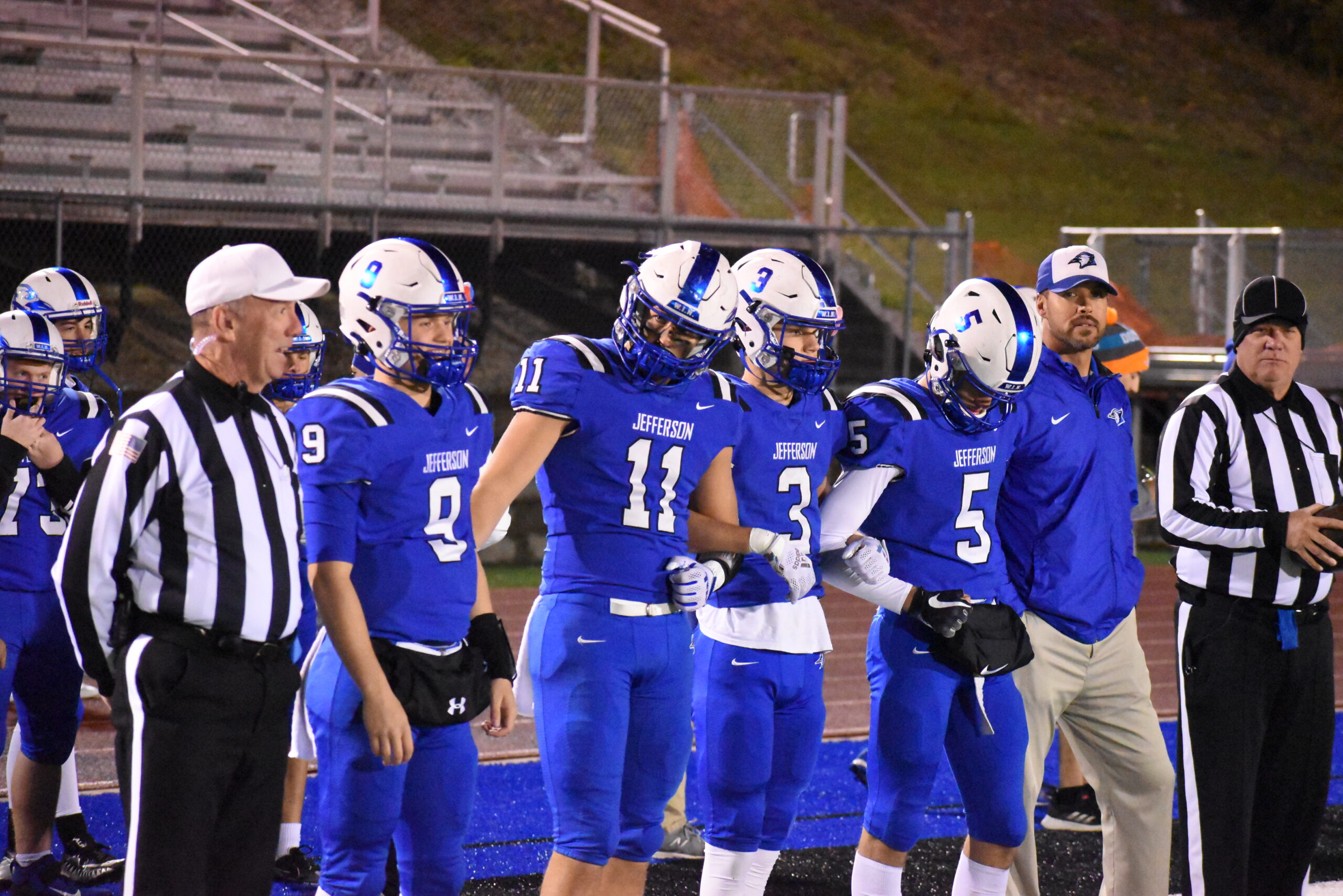 Jefferson Ousted by Kelly in 22-21 Heart-Breaker

The Jefferson R-7 Blue Jays Varsity Football team is defeated in the first round of the playoffs, ending their season, and also capping off the coaching career of HC Alex Rouggly.

It was a thrilling game all the way to the end, but unfortunately for the Jefferson R-7 Football team, it was also the end of the season. The Kelly Hawks did what no team could do this season, defeat the Blue Jays at home. In fact, in the regular season, Jefferson was only beaten twice. However, Friday, October 29th just wasn’t their night.

The Blue Jays were on a roll, winning the last three games of the season in decisive fashion, earning them the right to host the lower seeded Hawks for the first round of playoff football. In the end, none of that mattered. The Hawks were victorious over the Blue Jays 22-21, and will move on in the playoffs.

Jefferson started off strong, taking only 25 seconds to score in the first quarter. At 11:35, Quarterback Drew Breeze found a gap and broke the line for a 54-yard touchdown run to give his team an early 7-0 lead. 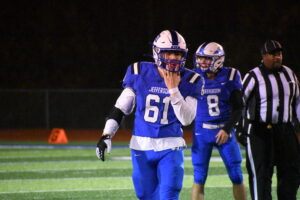 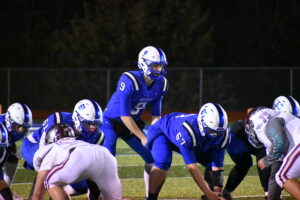 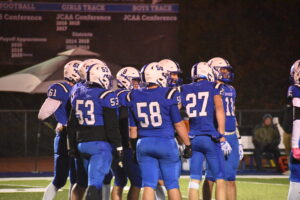 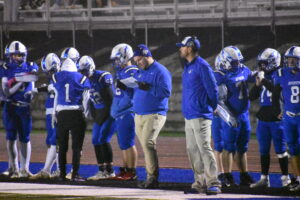 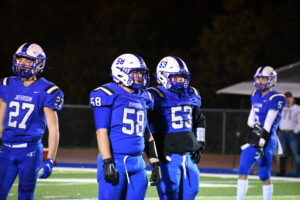 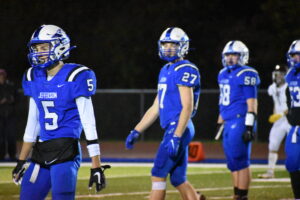 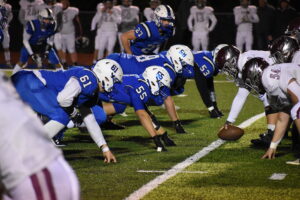 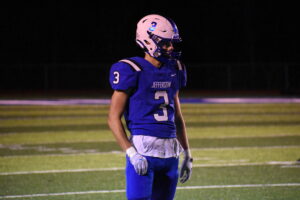 That score would stand until the second quarter until the Hawks eventually came up with a big play of their own, a 49-yard pass to score their first touchdown, tying the game 7-7.

Both defenses then held strong for the rest of the second quarter, so after one half of play, it was all knotted up at seven a piece.

In quarter three, D. Breeze answered back with a 49-yard touchdown pass of his own. He found Colton Richardson who took it to the house for the second touchdown of the game for Jefferson, making it a 14-7 game with 4:50 left in the third.

The Jefferson defense did what they could, but with 38 seconds left in the quarter, Kelly hit a 24-yard touchdown pass to re-tie the game, 14-14.

Both offenses were stifled for most of the fourth, until Sam Stokes finished a Jefferson drive with a three-yard touchdown run, putting his team back on top 21-14 with only 2:16 left in the game.

The Blue Jays hoped the game was over. Just one more defensive stand and the game would be theirs. Kelly, however, had other plans. With just 12 seconds left in the game, Kelly completed a 15-yard touchdown pass to bring the Hawks to within one, leaving the score at 21-20. The Kelly coaching staff then opted to risk it all, and go for the two-point conversion. Their dice roll paid off, as the Hawks successfully converted to take the lead 22-21.

Jefferson needed a miracle with essentially no time left on the clock, but it didn’t happen, and the Hawks upset the Blue Jays 22-21.

Congratulating his team, Head Coach Alex Rouggly commented, “We are very proud of our kids’ efforts tonight. Unfortunately, one team had to lose and that was us. We can look back at this game and wonder about the ‘what ifs.’ That would be the easy thing to do. We will look back at this season as a year that our kids truly got better week-in and week-out. They played for each other and put each other first. That is a trait that they will be able to carry for their entire lives.”

On the ground, Jefferson ran the ball 41 times for 235 yards. D. Breeze did a lot of the work on his own, with seven carries for 91 yards and a touchdown. Will Breeze added 11 rushes for 38 yards while Stokes had the most chances with 12, covering 56 yards and one touchdown. Usery also had nine runs for 39 yards.

After the game, D. Breeze stated, “We played our tails off all night. Some things just didn’t go our way and we should’ve scored at certain times that I think would have been a game changer. Certainly not what we expected, but I could not ask for a better team effort.”

On the defensive side, Richardson and Konner Armstrong each made six tackles. Jackson Combs and Stokes each added four a piece, and Nate Breeze had three tackles and an interception.

Armstrong mentioned, “This was definitely not the way we wanted the season to end, but it just happened to end this way. Kelly was a great team, definitely, but it wasn’t all bad. We did a lot of great things to be proud of.”

Rouggly then said, “We want to thank our seven Seniors for everything that they have done for our program. Our program wouldn’t be where it is today without their continued work ethic, attitude and dedication to doing what is right all of the time.”

He continued, “On a side note this is my last game coaching at Jefferson R-7. When I took the Athletic Director job it was known that this was my last year as the Head Coach with all of the duties that I have added in the administrative world. Thank you to everyone who has helped make this program a success throughout the years. We greatly appreciate it!”

D. Breeze commented on his coach, “Playing for Coach Rouggly has been an absolute honor. He brought so much to this program and I cannot even begin to thank him for what he has done. He has molded me into a great young man and I will sincerely miss him. It’s going to be hard to move away from the Friday night lights, especially when you get to play for someone with such class and energy as Coach Rouggly. I’m going to miss this whole team and the coaching staff greatly. It has truly been a great season.”

Armstrong also mentioned his coach, “Of course it was hard to watch coach Rouggly go, but all you can do is be thankful for being able to be coached by him for the time I was and for all of the guys that he brought together that I can now call my family.”

With that unfortunate outcome in the books, Rouggly will now solely continue with his administration position as the Jefferson Athletic Director. We wish he and his football program, as well as all of the athletic programs at Jefferson, continued success in the future.

It’s never easy to lose, and of course being eliminated from the playoffs is especially painful, but the 7-3 Jefferson Blue Jays will always have an impressive 2021 season on which they can look back and be proud. Congratulations to all involved.

Jefferson Ousted by Kelly in 22-21 Heart-Breaker