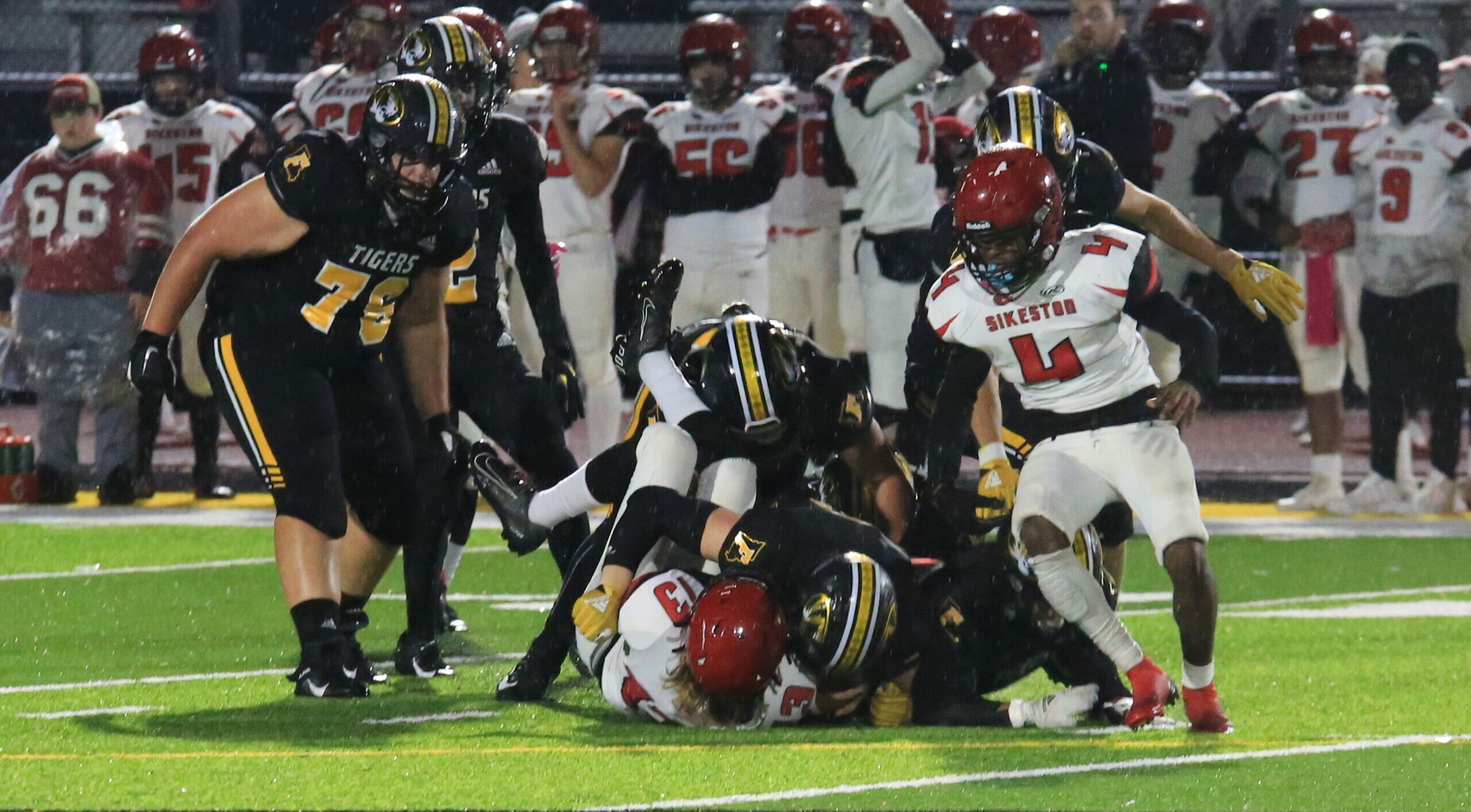 Festus Advances in District Playoffs After Blowing Out Sikeston

The Festus Tigers Varsity Football team keeps their season alive as they pound the Sikeston Bulldogs 48-6 in round one of the District playoffs.

The Festus Tigers repeated the winning formula they cooked up last week against St. Charles West and used it to take down the Sikeston Bulldogs this week, as the Varsity Football team cruised to a 48-6 win. The lopsided victory kept the Tigers’ season alive and proved they can be a menacing threat to opponents when everything clicks.

Despite a scoreless first quarter for both teams, the balanced attack through the air and on the ground, coupled with a stingy defense, was on display once again in this one. In the second quarter, the Tigers looked to running back Kaian Roberts-Day, who had a huge game, to get the scoring started. After a bomb of a 48-yard pass to Landen Yates that set the offense up in the red zone, Roberts-Day ripped one off from ten yards out and then took care of the two-point conversion as well. Festus led 8-0 just 17 seconds into the quarter.

The Bulldogs would answer in the second with a touchdown of their own on a four-yard run, but the point after failed and Sikeston trailed 8-6, a deficit that they wouldn’t overcome the entire game. 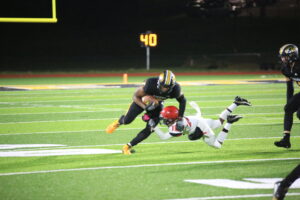 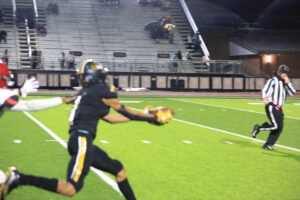 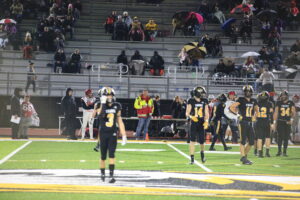 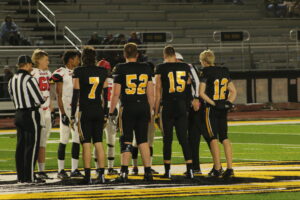 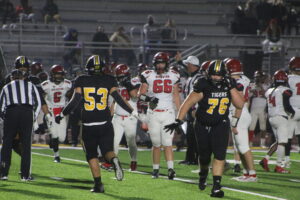 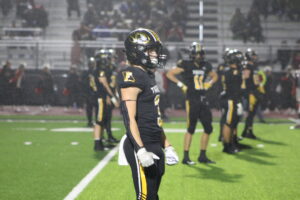 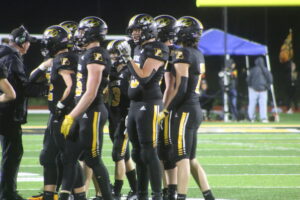 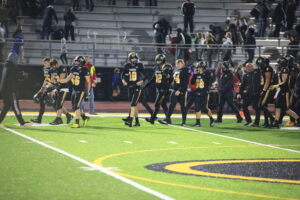 Quarterback Cole Rickermann found wide receiver Eric Ruess with a nifty little screen pass over the middle into heavy traffic, and Ruess juked and deked his way around what seemed like 1,000 defenders before streaking into the end zone for a 35-yard TD and a 15-6 lead. Then just four minutes later on the Tigers’ next drive it was Rickermann again, this time hooking up with Isaac Stucke on a beautifully floated pass into the back of the end zone. It went for 19 yards and Stucke was just barely able to get his feet in before collapsing out of bounds to give Festus a 22-6 advantage and close out the half.

The third quarter then showcased the running game once again, as Roberts-Day ripped off a three-yard run to make it 29-6. Then, after one of a seemingly endless string of defensive stops by the Tigers, they found the end zone again on their next possession. This time it was Yates, who punched it in from 16 yards out on a clever rush that made the score 35-6 and sucked any and all hope out of the Bulldogs.

The Tigers weren’t done in the third though. Rickermann found his favorite target in Arhmad Branch with a beautifully thrown ball over the heads of two Sikeston defenders. Branch reached out, reeled it in and then booked it into the end zone for a highlight reel 55-yard touchdown. He celebrated as he cruised into the end zone untouched and the Tigers were pouring it on to the tune of a 41-6 advantage.

The fourth quarter saw more stellar defense from Festus as they recorded their third clean sheet of the game, highlighted by a blocked pass and a fumble recovery by Yates. The Tigers then, on the ensuing play, handed the ball off to Roberts-Day, who picked up some key blocks before making a man miss and streaked down the sideline for a 36-yard touchdown. The Tigers defense held strong the rest of the quarter, the offense ate up the clock and they hung on to win 48-6.

Not only did this win keep the Tigers’ season alive, but it marked some impressive individual achievements as well. Rickermann was 12-of-15 for 268 yards and three TDs and the effort put him over 2,600 yards on the season. A feat rarely seen in High School Football. When asked about his performance and the milestone achievement, the Festus signal caller responded with, “We executed terrifically up front, allowing all of our skills to make plays. We need to have a good week of practice and once game time comes, execute to the best of our abilities. On breaking the 2,600 yard record, it feels great to be able to accomplish a feat like that.”

Branch made some history in this one as well. He caught four balls for 114 yards and a score, and that total put him over 1,000 yards for the season. The stud wideout shared his thoughts on the game, saying, “It felt great to get that win. Seeing the team battle every play just meant a lot and it showed that everyone wanted to play. It feels great breaking 1k yards because I know how much work I put in. My teammates know how much work I put in and they do as well. It just feels surreal.”

Ruess had a strong game through the air as well as he caught four passes for 52 yards and that shifty TD through traffic. He commented on the game by saying, “It felt good getting the win because now we can get on a roll leading into the Hillsboro game. We need to have a really strong week of practice being physically and mentally prepared and have to be locked in and focused to get this win vs The Hawks.”

On he ground it was all about Roberts-Day. The bruising tailback ripped off 16 carries for 176 yards and three TDs, marking his best game of the season when the Tigers needed it most. He was paced by Landen Bradshaw who had seven carries for 55 yards of his own.

It was a complete effort on both sides of the ball and Festus is playing their best Football of the season at exactly the right time. They’re going to have to keep this winning formula intact though, as they take on their crosstown rivals the Hillsboro Hawks in the next round of the playoffs. Hillsboro already won the first head-to-head matchup this season, so the Tigers will need to bring their A game.

The game will be live-streamed on mshsaa.tv.

Festus Advances in District Playoffs After Blowing Out Sikeston