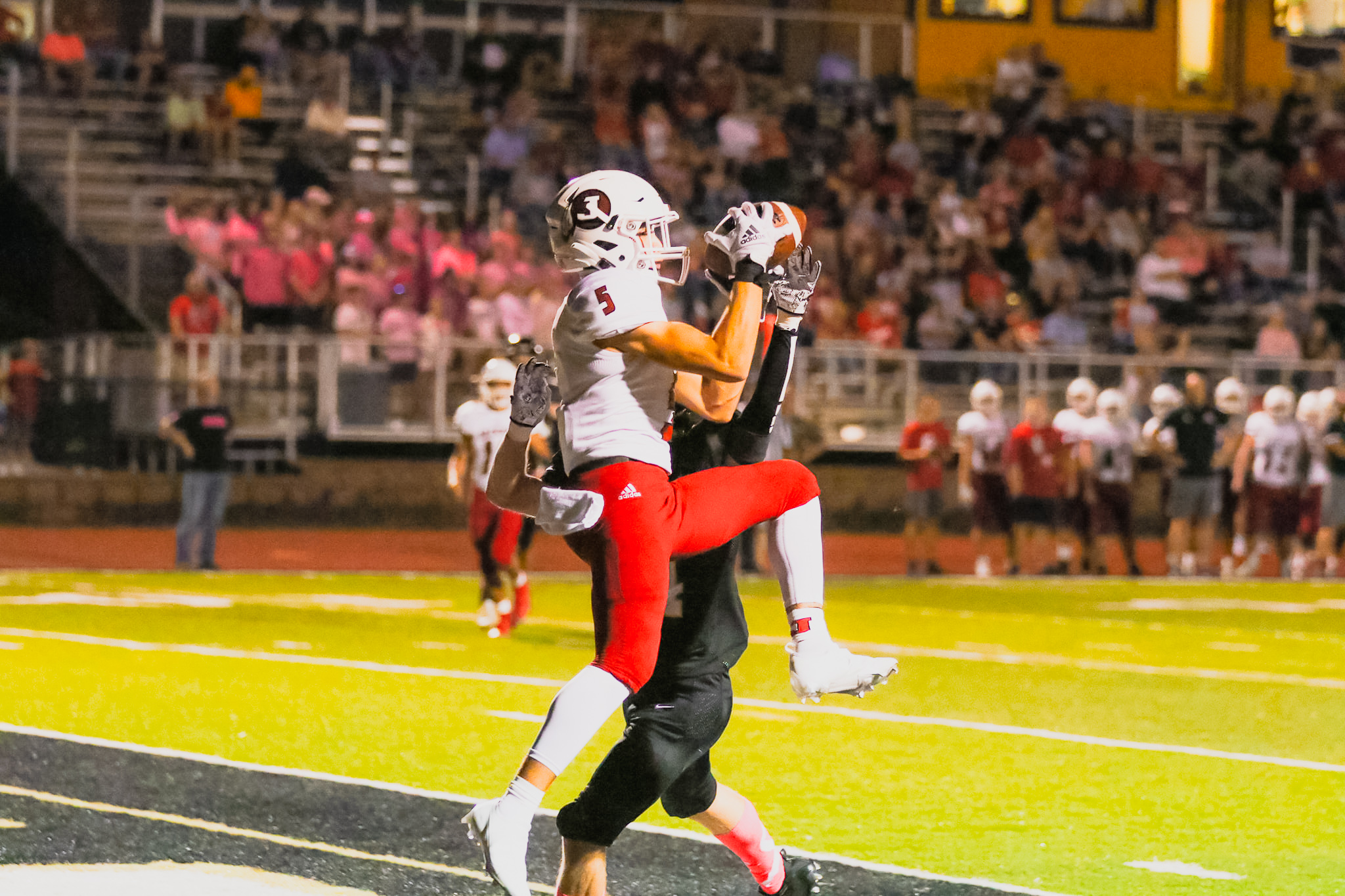 The Jackson Indians Varsity Football team kept the winning streak alive as they decimated the Farmington Knights on Friday night by a score of 55-0.

The usually tough Farmington Knights didn’t prove to be much of a challenge for the Jackson Indians on Friday night. The Indians Varsity Football team pitched yet another shutout as they blanked the Knights in convincing fashion 55-0, and beat them for their fourth straight SEMO North title.

As it so often does, this game started out with a big run for a score. Old reliable Tony Williams scampered into the end zone from 35 yards out and put the Indians up 7-0 just three minutes into the game. Then after a defensive stand and a long drive down the field, Williams re-upped with a second score. This time he punched it in from two yards out and put Jackson up 14-0 as the first quarter clock wound down.

The second quarter would feature the air attack. Stud QB Cameron Marchi got down to business by hooking up with his favorite target, Kannen Turley, for a massive 78-yard touchdown strike to extend the lead to 21-0. Then, tit-for-tat, the ground game got back in the mix as Joshua Wehrenberg ripped one off for 46 yards, a score and a 28-0 advantage.

Not to be outdone, Marchi got after it again. This time he hooked up with emerging receiver Isaiah Davis, who dashed into the end zone from 20 yards out. That seemed to work, so with the clock down to just seconds remaining in the half Marchi and Davis decided to connect for another 20-yard score, putting the Indians up 42-0 at the break.

Go figure. The second half started out with Marchi hooking up with Davis for a third time. They put a little wrinkle in this one, as the touchdown went for 37 yards this time. Regardless, it extinguished any hope of the Knights mounting a comeback, and with the Indians up 49-0 it was time to rest the starters.

The defense remained stout throughout the game, keeping a clean sheet, and then late in the fourth quarter youngster Zach Zimmerman rushed one in from two yards out to finish up the scoring for the day. After a missed two-point conversion, the Indians proudly finished the game with a 55-0 victory.

Jackson outgained Farmington 477 to 118 overall, and the defense blanked the Knights’ air attack to the tune of just 16 positive yards with the pass (which came on just one completion). Surprisingly, there were no turnovers in the game, but the Jackson defense did tally three sacks and blocked a punt in their third shutout of the season. Tony Terry was relentless in this one with nine tackles, one for a loss and a pair of sacks, and was responsible for the blocked kick. Flint Guilliams and Mark Brakhane had excellent games as well with five tackles and two assists apiece.

Regarding the defensive mastery in this one, Terry said, “I felt it was a good representation of Jackson football. The defense was dominant and we took care of our responsibilities all across the board. It was great to see the offense score so quickly back to back. This will be another great week and Cardinal Ritter will be ready, no doubt. We will prepare for what we have already seen which will allow us to correct any mistakes and weaknesses.”

Offensively, Marchi was pinpoint again, going 12-of-16 for 234 yards and four touchdowns. Davis was an extension of his right arm in the end zone with three scores and 88 yards on six grabs, and Turley led the team in receiving yards with five catches for 137 yards and a TD. On the ground, Williams led the way with 77 yards on six totes and found the end zone twice. He was complimented nicely by Wehrenberg (5/70/1) and Zimmerman (11/41/1), showcasing the versatile Jackson rushing attack.

Blake Blackman commented on the dominant win as well, saying, “It felt really good to get a shutout, especially against an offense like theirs. As far as the next game, we are hoping we can get the job done like the last time we played them, but we know anything can happen so we are preparing to play our best.”

Next week’s victim will be the Lions, as Jackson travels for a rematch with Cardinal Ritter Prep. Kickoff is at 7pm.