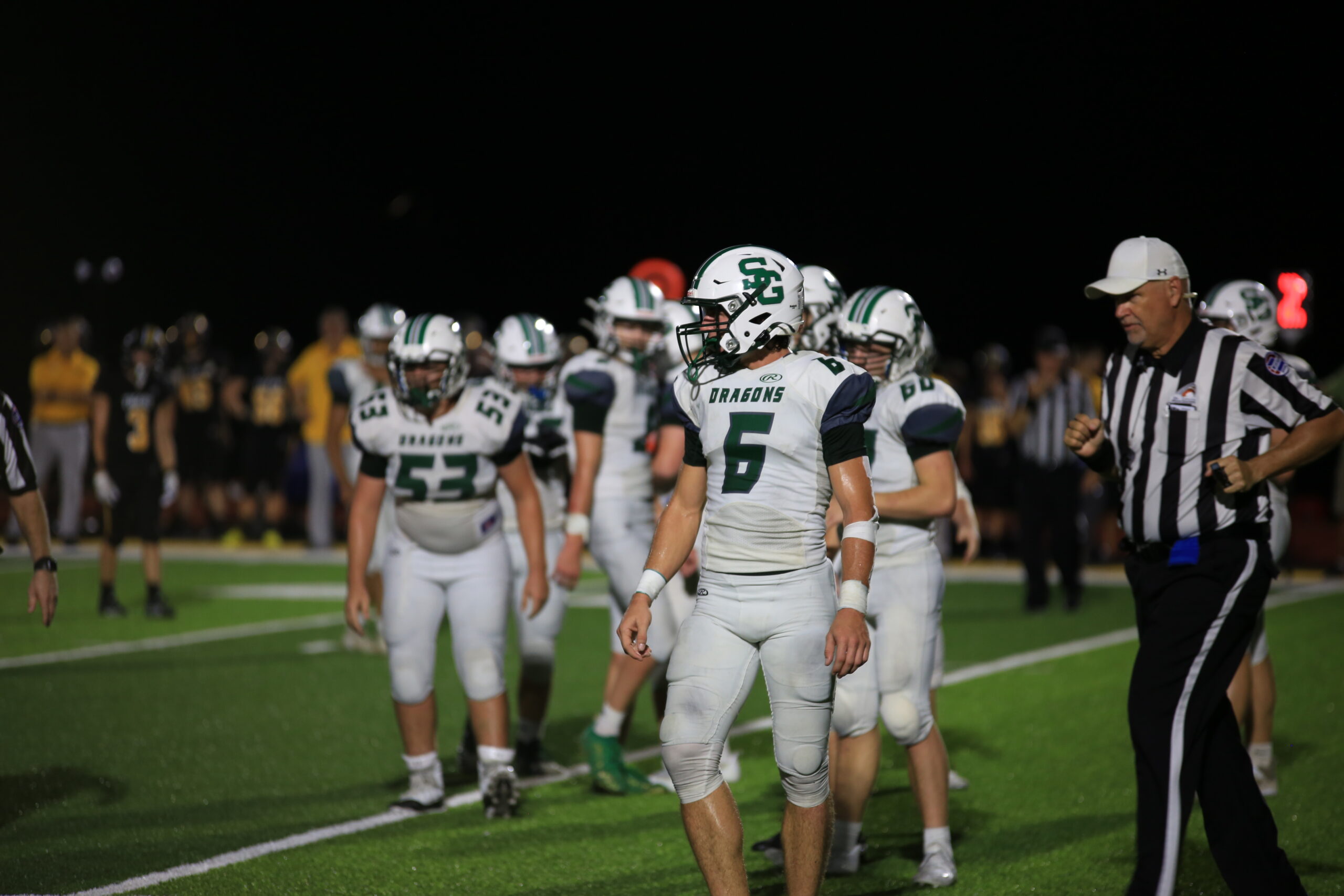 The Ste. Genevieve Dragons Varsity Football team takes care of the Potosi Trojans for their second win of the season. They travel to Fredericktown to take on the 0-4 Bobcats next Friday, September 24th at 7pm.

The Ste. Genevieve Dragons Varsity Football team picked up a 41-21 victory over the Potosi Trojans on Friday for their second win of the season.

The score reads 41-21 but the game didn’t seem that close throughout. The Dragons came into this one guns blazing and got off to a hot start. Aiden Boyer found Kaden Flye on a ten-yard touchdown pass that gave Ste. Gen the initial lead. Then, as if no knew Aiden Boyer could throw the long bomb he unleashed his arm and launched a 64-yard touchdown bomb to Zach Boyer that put them ahead 14-0. Austin McBride added on to the first quarter damage with a 45-yard touchdown run, ending the first quarter up 21-0.

The Trojans found their way onto the board in the second quarter connecting on a 28-yard touchdown pass for their first points of the game. Ste. Gen continued to fire on all cylinders as Aiden Boyer found Zach Boyer yet again on a 37-yard touchdown pass and The Dragons took a 28-7 lead into halftime.

The third quarter saw more of the Boyers in action. The Aiden to Zach connection was tearing apart Potosi as Aiden found Zach on two more touchdown passes in the third, one from 41 yards out and one from 24. That put Ste. Gen ahead 41-7 and gave the Trojans a steep hill to climb to get back into the game. Potosi found the end zone two more times in the game but ultimately fell short. The Dragons won 41-21 and bumped their record back to .500.

“I feel like the game overall was a huge success,” Jacob Johns said. “We do have some things to improve on but I feel like we carried over the momentum from the Kennett game and fought every second.”

Aiden Boyer had his second straight 300 plus yard passing week, with 327 yards through the air and five touchdown passes. Zach Boyer was on the receiving end of four of those touchdowns from Aiden and put together 180 receiving yards as well. Flye contributed seven catches for 87 yards and a touchdown. McBride was their workhorse in the backfield. He carried the ball 21 times for 157 yards and a touchdown. The Dragons put together 534 yards of total offense.

Tanner Weiler led the Dragons with six tackles. Thomas O’Brien was right behind with five tackles, three of which were for a loss. He picked up a sack as well. Will Vaughn picked up the team’s only other sack. Carter Burr had two tackles for a loss as well.

“I feel like the season so far has been very successful,” Johns said. “We had high expectations going in and so far I think we are doing very good. We just hope to continue this into next week.”

Ste. Gen now sits at 2-2 on the season. They have a good opportunity to pull their record above .500 when they travel to Fredericktown next week to take on the 0-4 Blackcats. That game takes place Friday, September 24th at 7 pm.