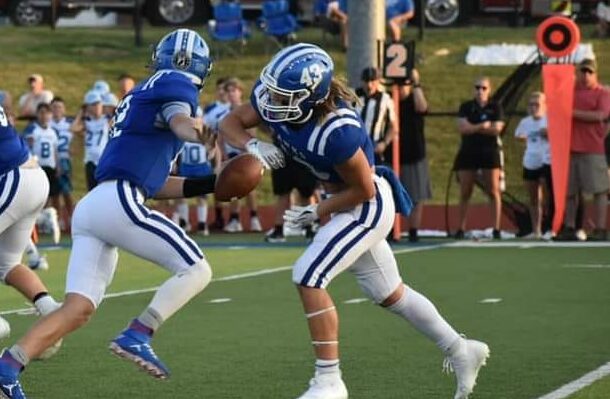 The Hillsboro Hawks Varsity Football team blows past the Cape Central Tigers 41-0 on Friday. Their next challenge comes against the North County Raiders next Friday, September 17th.

The Hillsboro Hawks Varsity Football Team got back to their winning ways with a 41-0 blowout victory over the Cape Central Tigers.

The Hawks needed this one after the humbling loss to Jackson last week. They were eager to get back on track and got things going right away. Tyler Watson ran in a five-yard touchdown to get the scoring started. Jaxin Patterson followed that up with a five-yard touchdown of his own shortly after. Patterson then ran in another touchdown before the first quarter ended and gave his team a 19-0 lead.

Patterson was all but done. With 10:15 to go in the second quarter, he took a carry 99 yards to the house for his third rushing touchdown of the game. If that wasn’t enough, he scored yet another rushing touchdown just a few minutes before the half expired. The Hawks went into halftime ahead 34-0.

From then on, it was all but over. Austin Romaine put his name in the scorebook with a two-yard rushing touchdown that gave the Hawks their final points. Hillsboro’s defense completely bottled up and devastated the Tigers. The Hawks secured the 41-0 victory and moved to 2-1.

Hillsboro’s weapon of choice was the ground game. Patterson carried the ball seven times and four of them were for touchdowns. Not to mention he racked up 144 yards which were good enough for 20.6 yards per carry. Romaine carried the ball six times for 38 yards and a touchdown. He also added three catches for 38 yards. Watson had four carries and found the end zone once as well. Griffin Ray passed for 67 yards and threw two interceptions but it didn’t matter. The Hawks absolutely devastated the Tigers on the ground. They ran for 257 yards as a team.

Hillsboro’s defense cannot be slept on. Cody Bishop led the way with seven and a half tackles. Romaine was just behind with five and a half and one tackle for loss. Patterson also helped out defensively with two and a half tackles for a loss. He also ball-hawked an interception just to bolster his stat line that much more. Canyon Stout, Alex Taberes-Medina, and Watson all had tackles for a loss as well. The Tigers couldn’t even muster up 100 yards of total offense. The Hawks held them to just 72.

“We were able to shut them out and keep our offense on the field and allow us to put points up on the board,” Watson said. “I like where our defense is at. We’re all on the same page, working as one unit which is what we need. We have been able to run the ball successfully, we just need to work on the passing game.”

If there was any question as to how Hillsboro was going to bounce back from the Jackson loss, they were all answered Friday night. This was a dominant effort on both sides of the ball. They traveled to Central’s home field and controlled the game from whistle to whistle.

“We just play for each other because we are brothers,” Jordan Jarvis said. “We go 110% every play and if we don’t then we are cheating each other from being our best.”

Next week, the Hawks will look to keep things rolling when they head to North County to take on the Raiders on Friday, September 17th.