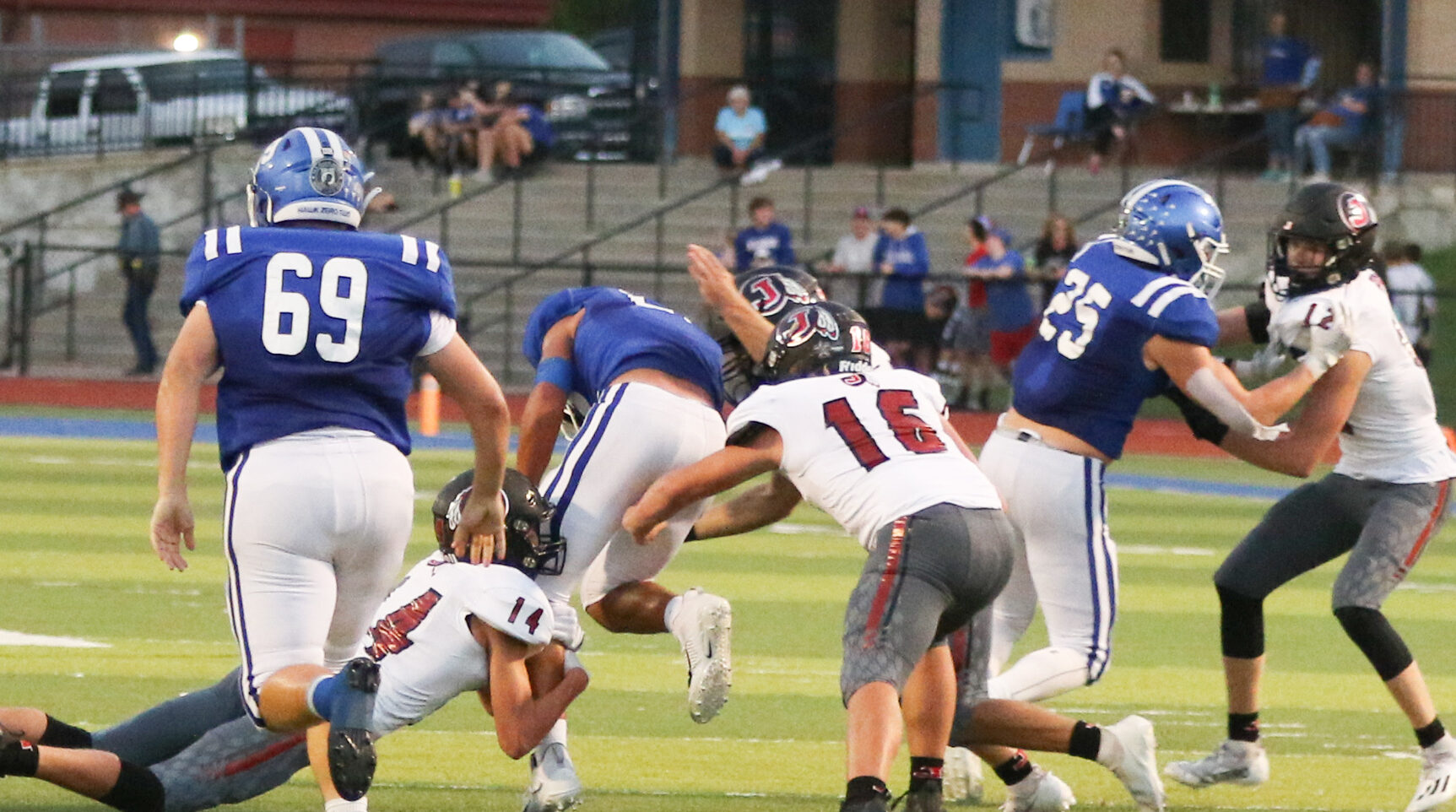 Hillsboro Falls to Jackson 42-0 for First Loss of Season

The Hillsboro Hawks Varsity Football squad falls to the Jackson Indians 42-0 and drop to 1-1 on the season. They look ahead to Cape Central on Friday, September 10th for their next challenge.

After a dominant showing in week one, the Hillsboro Hawks Varsity Football team was humbled Friday night by the defending State Champion Jackson Indians 42-0. This was Hillsboro’s first loss of the new season.

It was a long night for the Hawks. Jackson scored their first points of the game with eight minutes left in the first quarter by way of a 24-yard touchdown pass. The Indians quarterback Cameron Marchi extended their lead four minutes later with another 26-yard toss to the end zone. They ran in one more touchdown before the end of the first and left the quarter ahead 21-0.

Marchi continued to put on a passing clinic in the second quarter and threw another 28-yard touchdown pass that extended the lead to 28-0. They kept Hillsboro at bay and took that lead into the half.

The Hawks’ luck didn’t change in the second half as Jackson continued to pile on. Marchi threw his fourth touchdown of the game with 9:15 left in the third quarter. The Indians ran in another touchdown in the fourth quarter to put the cherry on top of the blowout. Hillsboro fell 42-0.

Hillsboro recognized the level of competition they ran up against and took away some positives from facing off against such a high-level opponent.

“They felt it tonight. It was a physical, physical football game for four quarters and they have not seen that kind of football yet,” Jaxin Patterson said. “We played as a team and never quit and played as best as we could and that’s all I could ask for from my brothers.”

The Hawks put together 225 yards of total offense with 187 of those yards coming on the ground. Patterson was the workhorse for Hillsboro. He carried the ball 30 times for 132 yards. Payton Brown had ten carries for 48 yards. He also had 18 receiving yards.

Hillsboro’s defense fell victim to the passing attack throughout all four quarters. However, they are not discouraged and were inspired by their team’s fight. Jordan Jarvis still has faith in his scrappy defensive group, saying, “We never stopped playing 100% and we played for each other,” Jarvis said.

This obviously was not the outcome the Hawks had in mind, but they sit at 1-1 with their entire season ahead of them. A beat down this early in the season can inject the fear of loss into a team like no other, but these Hawks are resilient.

Next up, Hillsboro takes on Cape Central on Friday, September 10th at 7 pm.

Hillsboro Falls to Jackson 42-0 for First Loss of Season