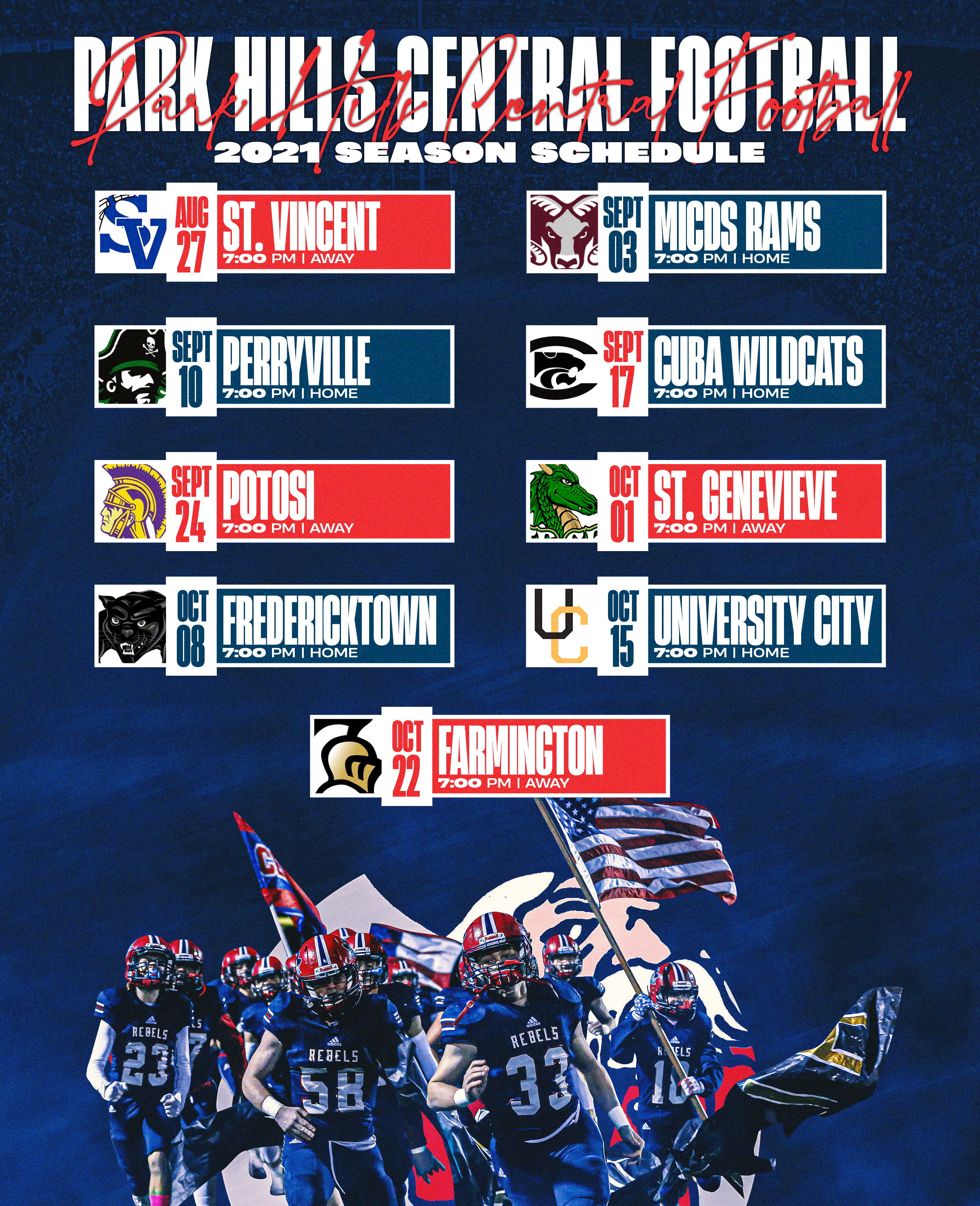 The Park Hills Central Rebels look to continue their success in 2021 as Ameritime Sports dives into the details of their schedule.

The Park Hills Central Rebels have a rich and deep Missouri High School Football History.  Their last ten years is some of the most impressive and influential football in the State.  An 8-2 record last year came on the heels of a 93-32 record in the 2010s and the program’s compass is assuredly pointed North.  A challenging 2020 schedule saw the Rebels rise to that challenge as they beat Class 6 Northwest and Class 5 rival Farmington.  Their only losses on the season came at the hands of Seckman and Cardinal Ritter (in the playoffs).  Optimism abounds for the 2021 squad and their schedule seems quite favorable this season. 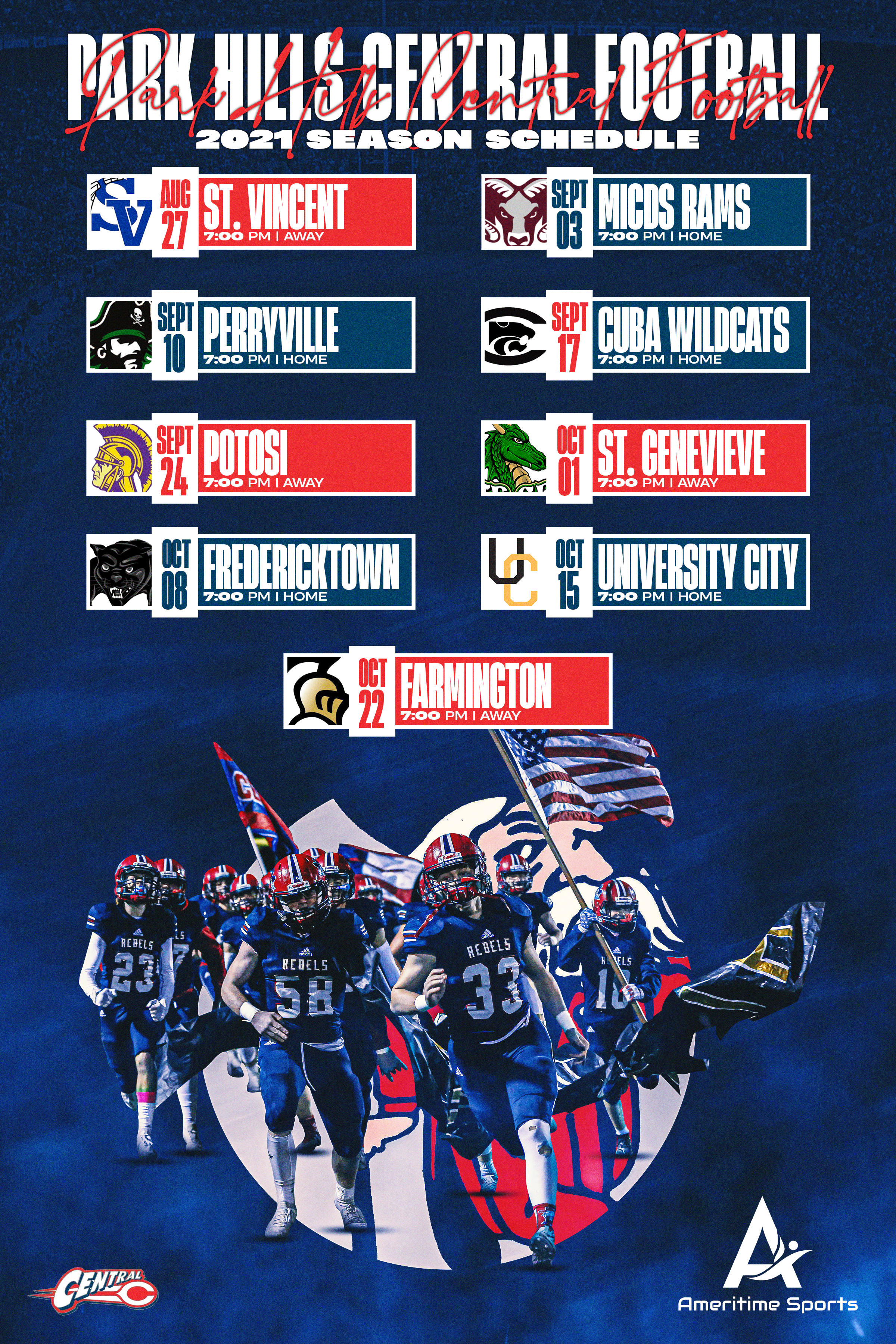 The inaugural matchup of the 2021 season for the Rebels is against a team they haven’t faced in 10 years. The St. Vincent Indians went 7-3 last season and should likely be a worthy, yet unfamiliar, opponent.  Park Hills does have the “recent” edge though with wins in their last two matchups, including an impressive 69-21 edge in total points.

The Rebels have only faced off against the Rams of MICDS four times in their history and it’s an absolute stalemate.  Both teams are 2-2, but the Rams have the most recent edge with a 2019 34-21 win.  A 20-0 second half sealed the deal in that one, but the Rebels have a revamped roster this go-round.  This one is anybody’s guess.

The Perryville Pirates have not posed even a whiff of a threat to the Rebels in the last decade, as Park Hills has won the last 10 meetings in a row.  Caveat alert: the last matchup was close though.  The Rebels managed a bizarre 7-6 win in overtime.  Perryville brought it that game, but that was a rarity as they went just 3-6 last season.  Unfortunately their season ended due to a Covid forfeit, so they should be pumped to get back in the win column.

Next on the docket is the Cuba Wildcats.  This middling club went just 5-6 last season and took it on the chin 42-15 in their lone matchup against the Rebels.  They struggled much of the season and were outscored by opponents 307-221 overall.  It’s hard to imagine they’ll pose much of a threat to the Rebels in 2021.

The Rebels will travel to Potosi where they own a 10-2 advantage over the last dozen years.  They’ve won the last two straight matchups, and last season Park Hills routed the Trojans 33-6.  Potosi was just 5-5 overall in 2020, but managed to go 3-2 in conference play.  It doesn’t take a fortune teller to predict that this is a plus matchup for the Rebels.

Park Hills has a very impressive overall record against the Dragons of Ste. Genevieve, going 13-5 over their last 18 matchups, but they will certainly remember the heart-breaking 24-22 loss in the 2019 State Tournament. Payback was delivered in the form of a 31-16 win last season though, and over the past six seasons Park Hills own an impressive 8-2 record against the Dragons.

Yet another team that the Rebels historically dominate is the Fredericktown Black Cats.  Park Hills is 13-2 in their last 15 meetings against the Black Cats and currently boasts a 12-game winning streak.  In fact, they have outscored them 175-31 over the past three seasons and the Rebels beat Fredericktown in the 2018 State Tournament.  The Black Cats were just 1-7 last season and are looking to crawl out of the gutter after a lost 2020.

This is a first-time matchup in the history of the two programs.  The penultimate week of the regular season pits the Rebels against the U City Lions.  Due to a Covid-shortened season the Lions were just 2-2 in 2020, and sadly have graduated six impactful Seniors.  This one is anybody’s guess.

The Farmington Knights should be a formidable matchup for the Rebels this season.  In fact, the Knights are the only team on the entire 2021 schedule that Park Hills has a losing record against.  The Rebels are just 2-3 since 2000 against Farmington and will have their work cut out for them in the regular season finale against a squad that went 10-3 last season.  They actually lost to the eventual State Champion Jackson Indians in the playoffs last year, so this contest will be one to mark your calendar for.