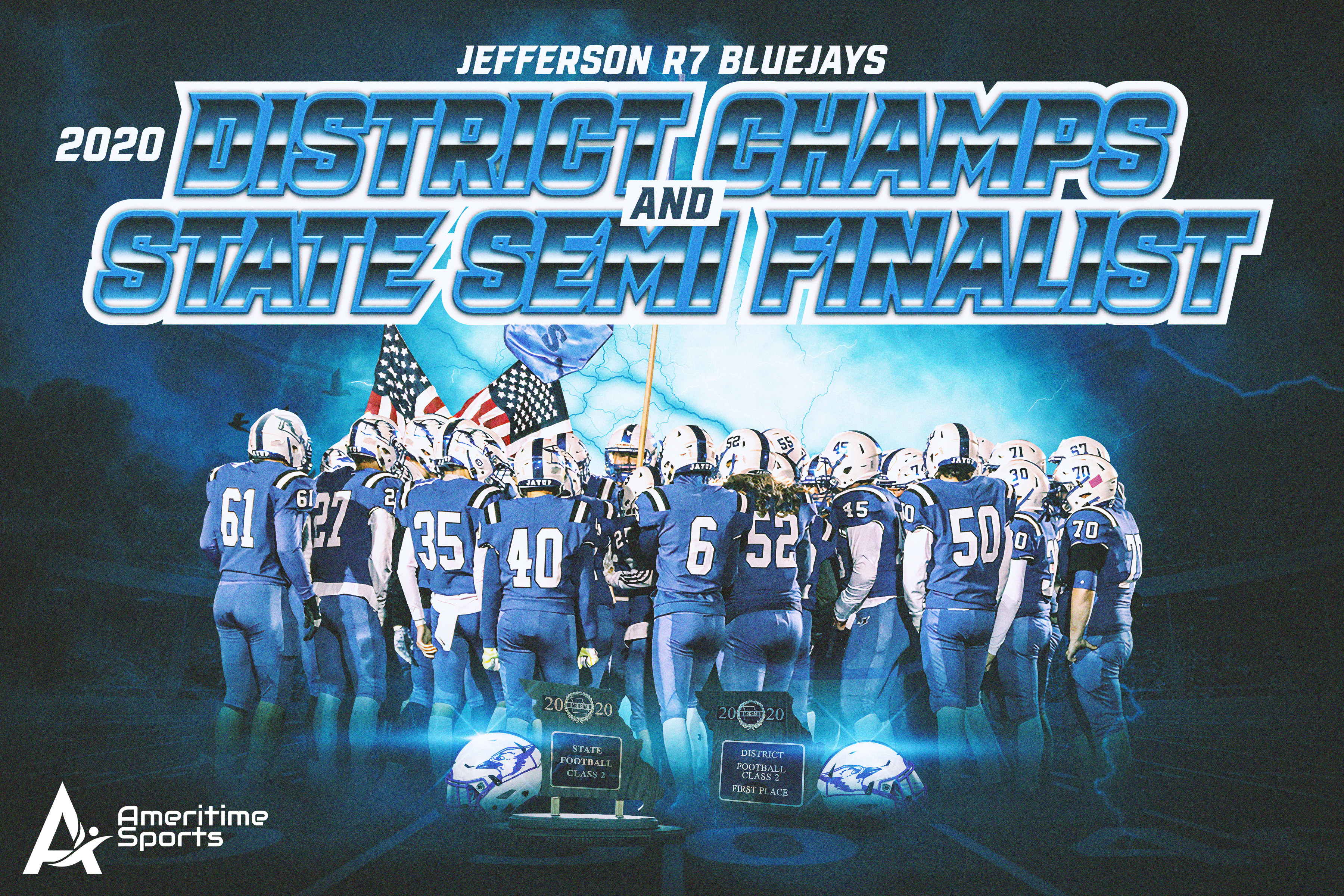 Rewind: Can Year Two of The Missouri Helmet Challenge Lead to Another Historic Run?!?

After another down to the wire finish, Jefferson R7 advances to the Elite Eight of the 2021 Missouri Helmet Challenge. As we continue to follow the BlueJays run through the brackets, we thought it would be fun to look back at year one of the helmet challenge!

If you’d like to order the featured image commemorating the BlueJays State Playoff Run you can order it here: 2020 BlueJays Football Graphic

It was by the slimmest of margins.  According to Jefferson head football coach Alex Rouggly, it was a difference of 19 votes to the best of his calculations.  Those 19 votes allowed the Blue Jays to edge the DeSmet Spartans in the state semifinals of the Missouri State Helmet Challenge, a contest held on Twitter that has gained momentum…and fans…as the tournament has progressed.

Out of 2,472 votes cast, Jefferson won by a close 50.4% to 49.6%.  The number of votes broke the old record of 2,213 votes set in the Blue Jays’ quarterfinal victory over Rockwood Summit.  And there were times when it didn’t look good for the home team.  “We were down 46 votes heading into the final hour,” Rouggly said.  “During those last moments, I had text messages going from my soon to be seniors (Class of 2021), to my coaching staff, to Jason Dreyer, to our friends down in Arkansas, trying to get as many votes as we could in the final minutes.”

But when the final buzzer “sounded”, both schools had 50% next to their names.  “Once we watched the poll close, everything went silent for about two minutes as Twitter tallied up the totals,” the excited coach said.  “I sent out a text to everyone that simply said – WE DID IT.”

Rouggly said the same folks were busy drumming up votes as they were for the quarterfinal match (see story below).  He also said it was a special day for a former Jefferson football player.  “I’d like to congratulate Jefferson alum Shane Clenin, who has helped us out a lot with this,” Rouggly pointed out.  “He graduated from the University of Arkansas today with a communications degree.  He has been accepted into the operations management graduate program at the university.  He will complete that degree while continuing his football career at Arkansas.”

And it’s a sure bet he’ll be leading the charge for his old high school beginning tomorrow at 3 p.m.  That’s when the Blue Jays and the Grain Valley Eagles will battle it out for the state’s best helmet.  Voting will last for 48 hours this time, and we’ll crown a state champ on Monday at 3 p.m.  Remember…search for the hashtag #MOHelmetChallenge.

Jefferson Heads to the Final Four!!  No Really, We’re Serious!!

The Jefferson Blue Jays are going to the Final Four!!!  If you don’t know what’s going on, you may think the old Ameritime Sports guy has gone off his rocker because of no games or events to cover.  But it’s really true.  The Blue Jays are heading to the “Football Helmet Challenge” Final Four.

Everyone is trying to fill the void during this pandemic, so Zach Mitchell, a football coach and English teacher at Parkway South, created the Helmet Challenge…a “competition” that pits the helmets from two high schools against each other.  In a 24-hour period, the helmet that receives the most votes, wins.

“We were able to find out about the challenge by just scrolling through twitter,” Jays’ head coach Alex Rouggly noted.  “We had seen that other states were competing in these helmet challenges, and they were getting a lot of attention.  Once I had seen the post, I sent in some pictures of our helmet to see if we could get into the tourney.  They had a selection show a couple of days before to set the brackets up.  We were fortunate enough to be accepted into the tournament, and received a first round bye before we faced Roosevelt.”

And the rest, as some say, is history.  Jefferson defeated Roosevelt 55% to 45% as 530 votes were cast.  As the Blue Jays advanced, round three was a tough one, as Jefferson faced a much larger district in the Fox Warriors.  “I knew against Fox we would have to reach out to some big names to get our brand out there,” Rouggly admitted.  The Blue Jays pulled away late, defeating the Warriors 54% to 46% as 994 votes were turned in.  Things were getting serious now.  Beating one of the largest districts in the

state gave Jefferson that “David vs. Goliath” mentality, and the helmet challenge fever was catching.

Did Rouggly ever imagine, when he entered Jefferson into this unique event, that this would get so serious?  “I really didn’t,” he admitted.  “We have an extremely strong community and school district.  I had no doubt that they would all be in for the battle.  They are as supportive of our teams and activities, as I have ever seen.”  But Rouggly also pointed out the the Jays have gotten plenty of help along the way, especially from the R-7 alumni.  “Jefferson alum Shane Clenin, along with one of Arkansas’ big recruiting news guys, Richard Davenport, came in and helped a ton.  Many small school programs like Windsor, Cuba, Drexel, Pattonsburg, North Andrew, South Shelby, Knox County, South Callaway, and Chillicothe, just to name a few, were able to put us over the top.  Our football conference also helped us during this tourney.”

Round four saw another huge school in Marquette standing in the Blue Jays’ way.  But Jefferson came out on top, 53% to 47%, setting up a quarterfinal match with Rockwood Summit that started yesterday afternoon.  “The latest round against Summit was an all-out battle,” Rouggly stated.  “Both schools reached out to their communities, as well as people, coaches, and stars from across the country.  Our student body and parents were absolutely awesome.  They came up huge for us.  NFL players Will Compton helped us, thanks to our school principal David Haug, and Brandon Williams was involved with Summit in this

one.  Clint Johnston, our superintendent, was also a big help.  We had coaches from Arizona, North Carolina, Texas, New York, Florida, Illinois, West Virginia, and more, supporting both schools.  The Cape Central football staff came up big for us as well.  It was a lot of fun to get those competitive juices flowing once again.  We hope that can be said for everyone in Blue Jay Nation during these ever-changing times.”

With about an hour remaining this afternoon, the contest was actually tied.  But the underdog slayed the giant once again, as Jefferson took a 50.8% to 49.2% victory in the final hour.  An amazing 2,213 people voted in the match.

The history of Jefferson’s helmet goes back a few years.  “My staff and myself designed it in our second year at the school in 2016, Rouggly explained.  “We wanted to make it our brand that the kids would also have a lot of pride in.  The years prior, we had a “J” on one side of the helmet.  We decided to make them pop a bit with an oversized Blue Jay head (on one side), a University of Tennessee blue chrome stripe down the middle, and their number on the other side.  These were made out of our Blue Jay blue color, while adding a chrome look to them to make them pop in the Friday night lights.”

Times have certainly changed over the years.  Those with a little age to them remember the helmets they wore were much less

elaborate, not providing nearly the amount of protection, nor the amount of flair.  And Coach Rouggly admits, the fashion aspect comes into play when designing any part of the uniform.  “We want our kids to feel like they are the best looking group wherever we play,” he said.  “We believe in the thought process of Look Good, Feel Good, Play Good.  Our kids deserve that.  The big thing is, if you’re going to look the part, you better be the part, and we feel that our kids have been both of those in the five years we have been at Jefferson.”

The question now is, can the Blue Jays slay another giant to make it to the Missouri State Championship?  Jefferson takes on DeSmet tomorrow (Thursday), with voting beginning at 3:00 p.m.  The other two schools in the semifinals are Park Hill High School and Grain Valley representing the other side of the state.  Folks can find the voting poll on twitter at @Coach_Mitch81 (Zach Mitchell) or search the hashtag #MOHelmetChallenge.

You don’t have to get there when the gates open to get a good seat, you don’t have to fight traffic, and weather conditions will not be a factor.  Just make sure your computer or phone is in good working condition, and your internet connection is strong.  GO JAYS!

If you’d like to order a print of the featured image you can order it here:

Rewind: Can Year Two of The Missouri Helmet Challenge Lead to Another Historic Run?!?