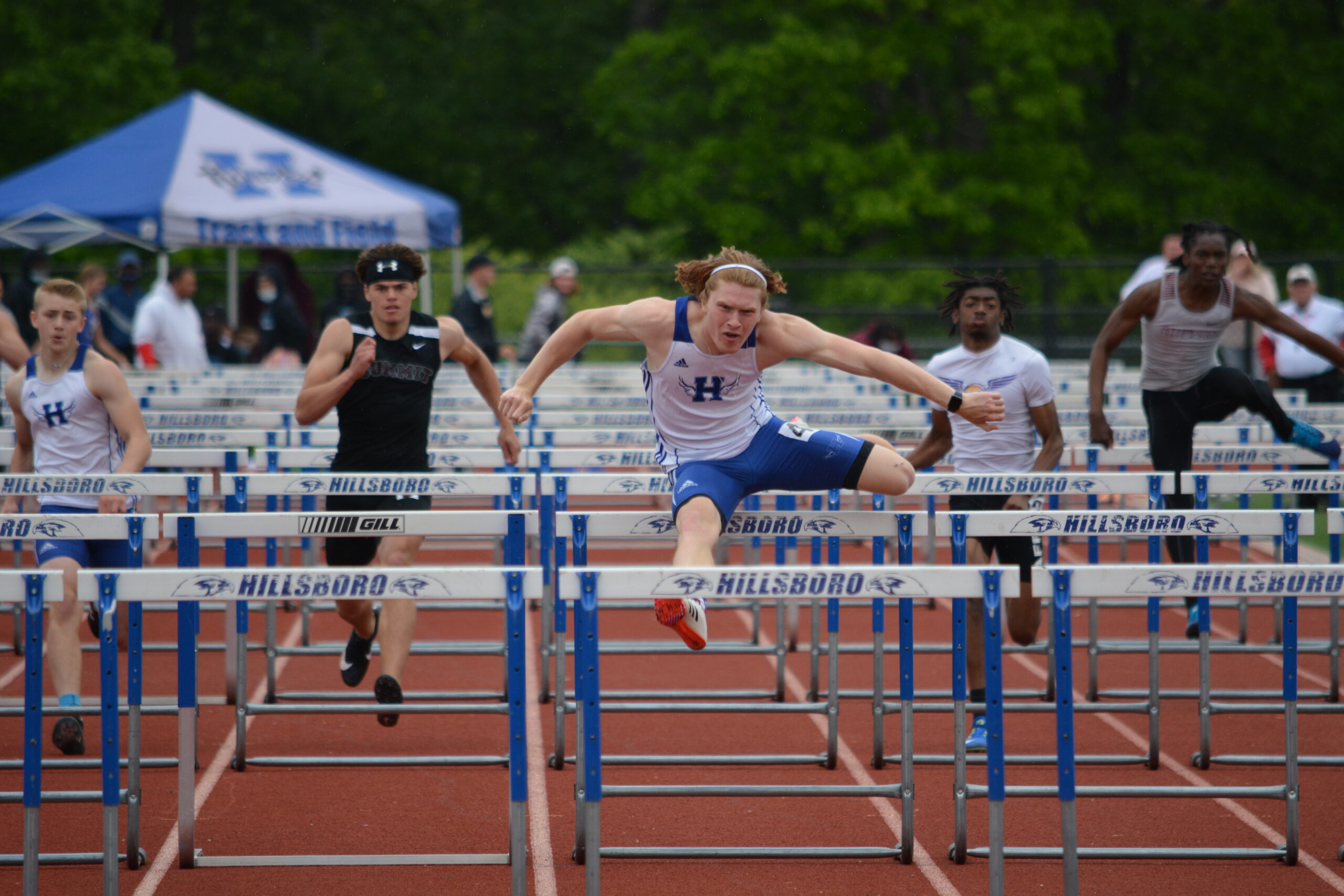 The Hillsboro Hawks Boys Track and Field squad saw their season come to a close at the state capital on Friday May 28th at the Class 4 State Championship. Several athletes got their feet wet, and one athlete came away with two State Championships.  Sam Wright happily and deservingly took home that honor.

Head Coach Todd Medley spoke on the final meet of 2021, saying, “One of the coldest state meets I have been a part of, but the weather was the same for everyone and we never use that as an excuse. They ran the 100, 200 and 110 hurdles in different directions due to the wind. Obviously, the great performances by Sam [Wright] (two State Championships) capped off the day, but I was very pleased with Tristan Jones medaling in the Triple Jump. He’s worked incredibly hard and every single year just got better and better.”

“It is everything I wanted after hearing our season was cancelled [last year],” said Wright. “I strived to become a name in Hillsboro Track and Field and I think I made it happen today.”

He certainly did. And that name doesn’t only appear in the boys’ record books at Hillsboro, as his sister Maya Wright has shattered records of her own this season and had an impressive performance at State, which can be read about here.

Jones’ Triple Jump performance was also impressive. His distance of 13.42 meters was good enough for seventh place, earning him a spot on the podium in his final meet of his High School career.

Medley also commented on the performance of several other Hillsboro athletes who made the trip out to Jefferson City. “Zach McNees had some foul issues but managed to get a throw out there in his last meet. He will be missed and will leave a hole in the throws that will be difficult, but not impossible to fill. All our other guys: Cruz [Valencia] in the 100, 200 and 400, Cody [Bishop] in vault, Patrick [Lee] in high jump, the 4×8 of Josh [Allison] and Jonah Allison, Jesse Gore and Jimmy Mann all got a taste of the big time and while they all were disappointed, talked about being hungry and focused to make it back next year in their respective events, plus more,” said Medley.

The 4×800 Meter Relay team finished in 8:36.11, which earned them 12th place. Josh Allison spoke on his team’s improvements over the season. “In the early season I didn’t think I was going to be where my goals were, time wise. However, throughout the year my teammates and I drastically dropped our times. We were doing really well in our 4×800 throughout the season, but at the state meet we didn’t perform our best. It was a super fun experience though, especially since we didn’t get to have our Freshman season. The entire season was a hard journey but definitely worth it.”

Jonah Allison echoed the sentiment, saying, “I would say our season was very good. We were extremely happy about making it to state as Sophomores. The state meet was exciting and nerve-wracking. Hoping to do better next year.”

With the 2022 season quickly approaching, Medley reflected on the unprecedented 2021 season. “It was just a blessing to be able to have a full season after not having one at all last year,” said Medley. “Yes, there were a lot of different issues we faced; masks, transportation to and from places, social distancing while at meets, but everyone from kids and coaches really just rolled with things. To win a Conference Championship in the fashion we did was incredible and adding the second District Title ever was awesome as well. These kids battled and battled and had success because they bought in to what we do here. Track and Field is not an easy sport. I’ve heard people say, it’s just running and anyone can do that, and what people need to realize is it’s the foundation that every other sport is built on.”