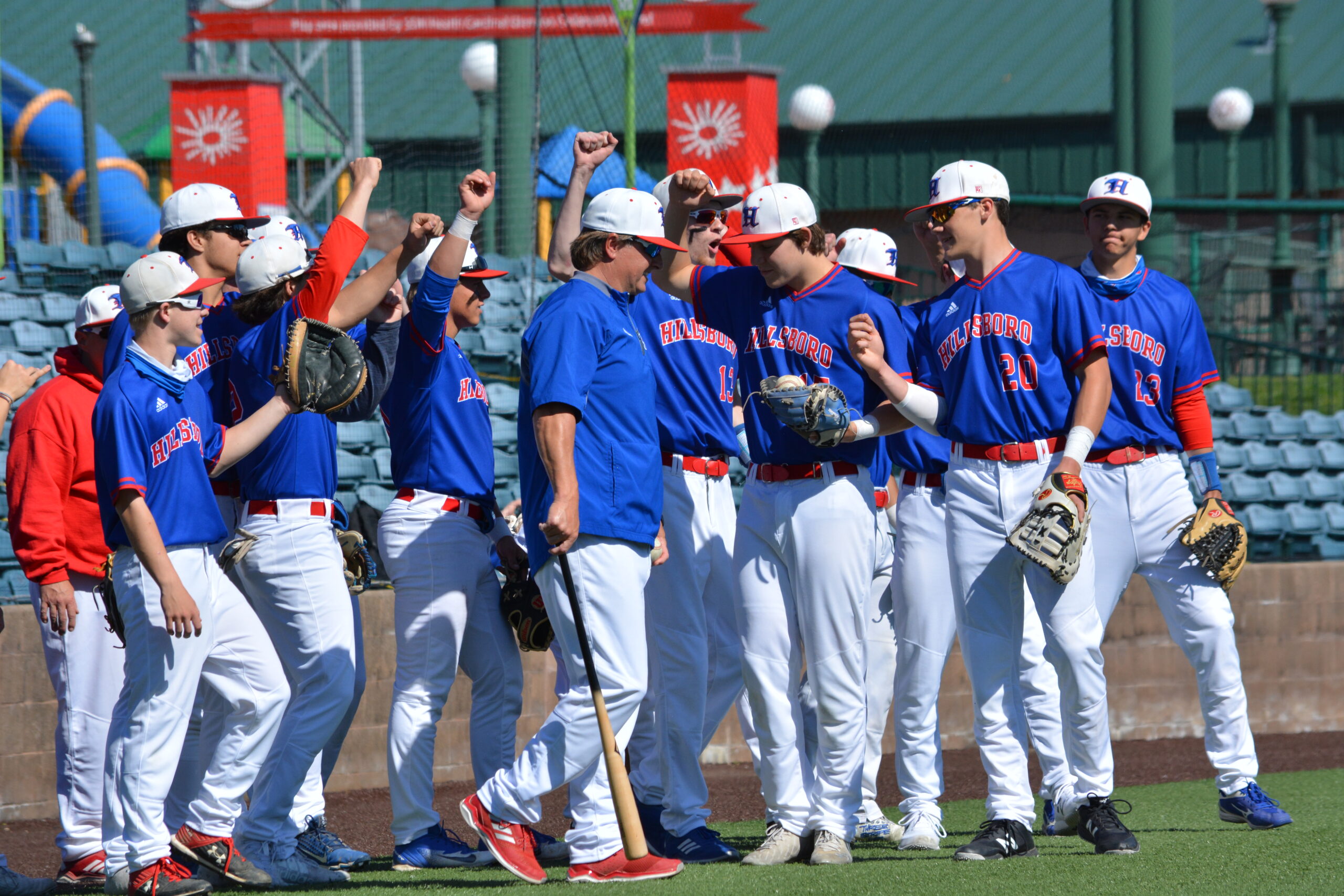 The Hillsboro Hawks Varsity Baseball team stayed right with the top seed in their District on Wednesday May 19th, only giving up one run, but that was all it took to end the Hawks’ season as they fall 1-0.

In a season full of ups and downs, it all came down to the District Tournament for the Hawks. They found themselves facing down number one seed De Soto in the first round on Wenesday May 19th. Hillsboro battled hard for all seven innings, only giving up one run to De Soto in the fourth inning, but they were unable to get on the board themselves, and the 1-0 loss brought their season to a close.

Head Coach Kevin Lucas spoke on the hard-fought game as the underdog. “Tonight was tough cause we had our chances but just couldn’t capitalize. Eli Epley threw a great game and kept us in the game. I’m very proud of how we battled and continued to give us chances to win. Coming in as the 8 seed some people [might not have] expected it to be this close, but I knew what we were capable of doing.”

Both teams were held scoreless until the fourth inning, but there were definitely chances to do some damage along the way. In the bottom of the first, Hillsboro found themselves with one out and an opposing runner on third base. Epley got a ground ball hit to Noah Shuman who gunned the runner down at home, preserving the 0-0 score. In the top of the third, Junior Arnold drew a walk, and reached second on an error, but the Hawks were unable to capitalize.

Even when the Dragons scored their only run, Hillsboro made the best of a rough situation. A single up the middle started the inning, and the runner was moved to second on another single up the right field line. After the leadoff hitter stole third, the next batter up hit a sac fly to score him and De Soto threatened to break the game wide open. However, a heads-up double play from catcher Jase Stewart put a cap on the inning and the scoring was over for the game.

“I thought we played good the whole game,” said Austin Romaine, who was good for a single on the afternoon. “[We] didn’t make many mistakes and we had chances to win the game; just couldn’t come through and get the job done.”

As their season was brought to a close, Lucas reflected on how their record did not reflect the talent of the group. “It was not the record we would have hoped for, but we definitely had some bright spots,” said Lucas. “I feel like we underachieved, we lost quite a few games by 3 runs or less. This was a really good group of kids that was a lot of fun to be around. We have some very talented players but we just struggled to put it all together at the same time. Early on our pitching struggled, then our pitching came around & we either struggled on offense or had some defensive mistakes that hurt us. It was nice to be able to get out & play this season. I do feel bad for our 6 seniors, they are a great group that will be missed.”

Shuman shared how proud he is of his Hillsboro club. “I know our record might not have been the best, but there was not another group I would want [to go out there with] and give the number one seed everything we had.” Shuman went on to say, “this year, everyone showed up to work and get better and I couldn’t be more proud. So many people each made each other better this year and that’s all I could ask for.”

Hillsboro finishes the season 8-17, but for those looking to the future, the JV team looks strong. They finished their season 15-3 and only scored fewer than five runs in three games.